Australian comedian Barry Humphries' humour identified and targeted a world of pleasant streets and gardens that is now under threat. We've stopped laughing, but is it too late? 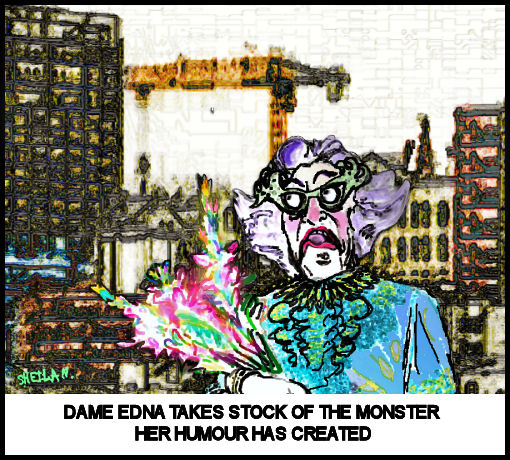 I was raised on the humour of Australian comedian, Barry Humphries, when his main alter ego was the suburban sage simply known as "Mrs Edna Everage” and his eastern suburbs commentary issued forth in the monotonous narrow viewed but well-meaning drone of Mr. Sandy Stone. Barry’s characters described a world which was very familiar to me, although I lived in neither the now famous Moonee Ponds nor in the apparent epitome of Melbourne mediocrity, Glen Iris. The adults in my family all found the Humphries humour hilarious, despite, or maybe because of the fact that their lives were being held up to good humoured ridicule. I shared this delight and amusement with them.

Barry Humphries' targets were mediocre, commonplace and rather petty preoccupations such as lawn mowing, sandwich making, wall colour, general domestic decor and associated status symbols. It was all so familiar and we laughed our heads off all the more, delighted to be laughing at ourselves and our nearest and dearest. Or if it wasn’t us it was someone we knew. The humour rested on an assumption of self- satisfied comfort and safety, devoid of outside threat. Our laughter and Barry’s merciless assault is an indication of how quickly we forget and how short each stage of our lives really is. Barry was born in 1934, safely clear of any expectation of participation in WW2 or The Vietnam War. He emerged as an adult in the postwar comfort and optimism of the 1950s and played to an audience where young couples were settling into their suburban Shangri -la’s. "The Australian dream” of the house and garden was alive and well and not under any threat. This situation continued for a few more decades but on a downward trajectory in terms of general accessibility, that is to say, affordability.

Fast forward to the present day and what was once a source of relaxation, pleasure, security and comedy, the suburban family home, is now turning into a tragedy.

The undermining of the family home and garden in concept and reality has been under way for at least 30 years. It began with soft rumbles, the odd newspaper opinion piece advocating the end of the 1/4 acre block and the beginning of a rhetoric very negative and critical of the way we lived. People started to parrot these opinion pieces and preach knowingly at dinner parties, that we couldn’t go on living as we were as though cleverly seeing into the future. Then they would go home and continue living as they were, no doubt thinking that it was people in the future who would have to live differently, not they. The point was that they did not express any feeling of being under threat. Yet they were. They are! 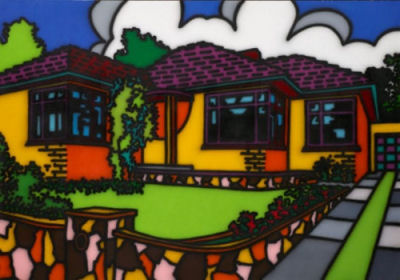 The sacred, yet hilarious homes of our parents and of us are now being demolished, at a frightening rate. The honest workmanship of the Californian Bungalo and the 50s triple fronted cream brick veneers is being replaced with nondescript non- architectural multi dwelling, fence to fence arrangements , devoid of of any reference to the humanity of those who are expected to dwell within. The subject of Barry’s whole comedy career is being pulled down in front of us; a new cavernous car park excavation appearing near where I live each week. That is the reality on the ground. In the media , a past Victorian Planning Minister, Justin Madden who now works for developers was given space for a whole article about the need and desirability, nay imperative, of demolishing 60 year old houses in a ring of Melbourne suburbs about 15 kms from the CBD. There’s always a new angle in the scramble to fit ever more residents into Melbourne (which grows by about 80,000 people p.a.) Developers who can get their hands on these unsuspecting little houses on their “1/4 acre" blocks (I understand they never were as large as 1/4 acre, really) can make a killing by demolishing and redeveloping to fit in more residences.

It seems to me that people are now really getting upset by all this. They see their local neighbourhoods in a constant state of transformation. They are living perpetually in a construction zone. Trees, houses and gardens go, roadworks and construction abound and there is the constant shock of empty blocks of land either totally cleared and levelled or exposing raw bedrock 3 metres deep, previously covered with a few tonnes of earth and rocks and iced with pleasant house and garden. 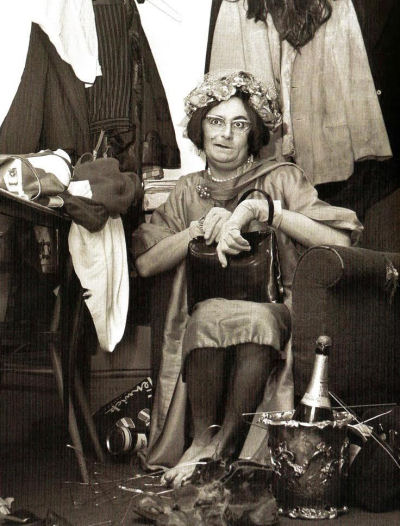 But what has this to do with Barry Humphries? Well for a start, the much derided but rather enviable and almost egalitarian Melbourne suburban way of life is swirling down the plug hole and will be gone before you know it. The people of Melbourne did very little to protect it when it was first under fire and now it is probably too late. Were we asleep at the wheel? Did Barry Humphries unwittingly lull us into a child-like sense of security about our home city?

What does Barry say now when, in actual fact what is happening is that our precious gardens are being used to accommodate an ever higher population? Had we been asked 15 or 20 years ago if we minded someone building in our backyard, we would have said, “go and find you own land!” but that is what we are being forced to do now. People move out of garden-surrounded houses into units with token amounts of land and end up with only a little bit of change from the exchange. Collectively, what is happening is that others are building in our gardens!

Barry Humphries’ jokes about the scourge of thrip on the roses (or was it the tomatoes?) will be incomprehensible to future Melbournians. How can this joke be funny when the “problem” is foreign to you?

Observations on how we are being backed into a corner

The propaganda against the 1/4 acre block started a few decades ago. - appearing as opinion pieces in newpapers. I believe this propaganda was aimed at very ordinary people in or suburbs with traditional blocks. It was to prepare them to relinquish their lifestyle and for their children not to expect it in the normal course of events. I don't think it was aimed at rich people as they are different - a special case. The very rich can actually do the opposite to "urban consolidation." The rich can buy the next door property in Toorak, bulldoze the house and annexe the land for their own pleasure in the form of a tennis court or swimming pool.

The propaganda seems to have been on behalf of those who wanted to effect radical change in values and rights for the sake of population growth, which for various reasons they derived benefit from - usually financial.

Why this is important

The 1/4 acre block affords some local self sufficiency to the ordinary person. 50 years ago it was quite common for people to keep chickens in the suburbs- some still do but I don't think it's as usual. There is probably an economic reason for this . Vegetable gardens were common then and they may be trying to make a return now.

Recently in Sydney I visited a cousin who has built her eco friendly dream home in the suburb of Ryde. The garden was for low rainfall, the house worked on passive temperature control and in the corner of this living arrangement was a chicken house with inhabitants. Area of block- 1/4 acre approx.

As oil depletion continues I believe self sufficiency will become more important. The more land per family we lose the less self sufficient we can be.

How dare we be talked into denying children the rights that we grew up with?

I believe the people of Melbourne are losing their land by stealth and propaganda. I also wonder how people can, on the one hand, be talked into having more children, and, on the other hand, talked into letting go of those children's rights.

In 2007 I made a submission to the Melbourne 2030 review. I made some of the points below. (Now Melbourne 2030 is out of date, of course. They are trying to bring in something even worse. )

Urban temperatures are higher than those in the country, and made worse by air conditioners. I worry about the reduced ability of land to absorb water with increased concrete bitumen, housing and impermeable surfaces in general. I can see this affecting the water table and possibly having ramifications with regard to street trees and other trees and vegetation on public land. We should be preserving trees to keep the city cool and moist instead of infilling and concreting everything.

I would have thought with all the apartments and townhouses shooting up in the bastardized process known as suburban infill, that we would want to keep backyards full of trees etc. Never mind that I'll never own a $1.8M 3BR house in Hawthorn East, I'm just glad someone owns it so that there aren't twenty people in 6 townhouses there instead.

So God bless those rich people in their big houses!! (Unless of course they are developers and politicians telling the rest of us to go and live in high-rise infills.)

Even if I have hardly any garden at all, I want to protect other people's gardens. They are part of the environment and even if the garden is not mine- I benefit if I walk past or live near it. I breathe the oxygen that its greenery exudes. I am cooled by the transpiration of the leaves. Even if I live in a one bedroom apartment in the same street, I am better off if this house and garden remain than if this house in turn is bulldozed for another block of apartments. I can see what the obvious counter argument is to this - homelessness - but that problem is circular; the root cause of homelessness is rapid population growth.

Urban wildlife is yet another issue - one I feel so deeply about that I can hardly even write of it. Gardens provide some habitat for native animals, birds reptiles, and insects. The more the city is consolidated, the more predictable every space within it becomes and there will be little room for any species other than humans, dogs and cats. And, even then, the dogs must be on leads and the cats must be kept indoors. It would make more sense if we made friends with the neighbourhood possums, but the government has designated them as pests.

I do not think that Australian politicians have a moral or any other right to do this to us.