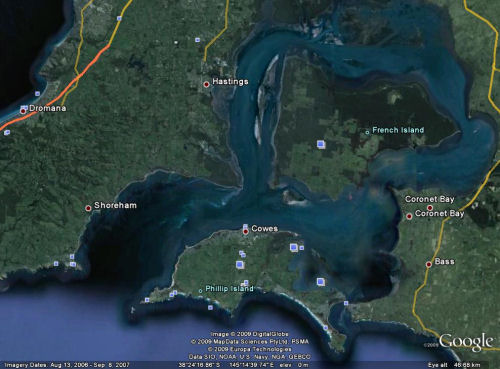 Picture: area to be developed for heavy industry

Growth at any cost is malignant growth

The State Government finally released its support for the Port of Hastings Land Use and Transport Strategy this month, and the full picture revealed of a deceptive, deceitful and underhand growth machine completely self immunized from the responsibility of planetary considerations.

Growth is the paradigm, growth at any cost. Trash those mosquito filled mud flats, no-one likes them anyway, least of all Lindsey Fox and his fleet of double B’s waiting to cart 300,000 vehicles from Hastings to the car fixated population that’s eager to buy the latest air bagged GPS status symbol available.

Sustainable Shire going up in smoke and mirrors

That this could happen in the Sustainable Shire is remarkable only if you consider the lengths Mornpen will prostitute itself to stress the credentials of freeways and UN sustainable growth. Having lied through the Shires back teeth to stress how much the residents of Mornpen supported the Frankston Bypass, the truth is now apparent. The porky’s told in Frankston about how the Bypass would REDUCE traffic congestion emissions was also a complete furphy.

The Bypass was the last enabling link to start the Port redevelopment, the State has had its “Brimbank” regional offices in Mornington and Frankston fiddling whilst the planet is burning.

The Buyersfear waits in the wings with an unelected chair, and 3 members lauding the “sustainability” of the proposal, with Greenies like this, who needs climate skeptics.

The completion of the Hastings development will see a massive surge in consumerism in a State that has one of the biggest Ecological Footprints in the world. Each one of us is now responsible for over 20 tonnes p.a. of carbon being emitted just for our electricity consumption.

2 million containers came into Melbourne in 2007/8, before the recession we never had that is. The State “estimate” is that by 2035 the number of containers will have increased from 2 to 10 million. How much carbon will each of us be responsible for when 5 times more “stuff” is being imported? If this figure is ever reached it will defy any agreement in Copenhagen for a sustainable future.

Who benefits from these crazy white elephant schemes?

Legal action now surrounds Eastlink, because the vehicle figures for the road are 100,000 short PER DAY. Who are these “bean counters” who keep putting this unsustainable carrot in front of gullible elected representatives, and an even more gullible society who just can’t do without new “stuff”..

Climate catastrophe is driving State and Local Government policy, it’s business as usual with a complete refusal to utter the blasphemous words, “make do with less”.

Editorial comment: A lot of us don't want growth, but the growth merchants run the mainstream media and don't give any alternative politicians publicity.

There are three marine national parks in this area to be developed and it is listed as a Ramsar Wetlands.

From the Port of Hasting's Corporation own website:
"Western Port Environment
Western Port - an area of worldwide environmental value

Western Port is an area that offers significant environmental values that are recognised worldwide. The bay is a listed Ramsar site, part of a Biosphere Reserve, containing three Marine National Parks and five Special Management Areas.

Western Port covers an area of 680sq kms and includes two islands, French Island and Phillip Island, which lie at the centre and entrance of the bay respectively. Approximately 40% of Western Port total area is exposed as mud flats at low tide.

Freshwater inflow comes via 17 waterways which drain the catchment. The Bunyip, Bass and Lang Lang rivers are the major inflow points which together contribute approximately 75% of the freshwater inflow.