Mark O'Connor, co-author of Overloading Australia talks on population fallacies and the IPAT equation and touches on Greens politics at the Sustainable Living Festival in a Sustainable Population Australia event. 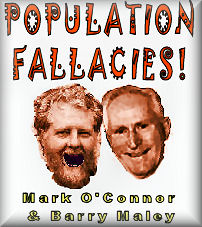 Barry Maley, in "Birth Rate Bubble" on ABC radio's Unleashed wrote, "Any nation needs to have a birth rate of not less than 2.1 children per woman to maintain its population. The second Intergenerational Report in 2007 observed that five people of working age were supporting every person 65 or older, but by 2047 there would be only 2.4 workers per aged person."

"A nice example of the 'Replacement Rate Fallacy'," quipped Mark O'Connor, author of Overloading Australia, [1] and a number of snapshot demographic analyses known as 'fallacies' prior to that. Here is what he has to say about claims by other pro-natalists that Australians' reproductive rate is running down:

The late pro-natalist B.A. Santamaria once informed his readers in The Australian that for Australia’s population not to fall rapidly the average woman must have 2 surviving children. Such views are quite common, and often lead to a false belief that population is either falling or about to fall. Thus in July 2008, when the Pope visited Sydney for World youth Day (just after World Population Day), Australia’s Cardinal Pell told the media that Western nations faced a population crisis fuelled by ‘ruthless’ commercial forces, and that ‘No country in the Western world is producing enough children to keep the population stable.’

If Pell was thinking about his native Australia he was right?but not in the way he imagined. Australian women are having far too many babies to keep the population stable. In fact almost twice as many as necessary. Births in Australia (about half a million a year) are twice deaths (about a quarter of a million) and have been so for the past twenty years?even though Australian women have been averaging significantly less than two children each for at least that long.

Clearly there is something cock-eyed about this “replacement rate” argument. It involves a common, but elementary, error in demography. Can you spot it?

Can you spot the elementary error?

In fact to keep stable and just replace itself, a relatively young population like Australia’s would currently need something even lower than Western Europe’s rate of around 1.3 children per completed family. More like 0.93. And that’s without immigration!

(Barry Maley also writes: "One of the symptoms of this problem recently confronted Greg Combet, Minister for Defence Personnel and Science, when he drew attention to the demographic problem of a shrinking pool of young men available for recruitment to the defence forces." O'Connor puts this one in its place here but elsewhere as well.)

Misunderstandings like Pell’s often come from those who a decade earlier might have tried to argue that we need more people for defence, or for “respect” in the world. As those older props are discredited, more weight has fallen on the Replacement Rate Fallacy. Underlying all this is a natural bias of human beings towards pro-natalism.

The replacement rate was a useful, if theoretical, concept back when couples everywhere were having 4 and 5 children as a matter of course. Since couples often justified this by saying that the world must be populated, demographers would point out that all a couple need do to replace itself, was to have 2 children. More exactly, about 2.05 children, to allow for the odd child that dies before reaching reproductive age, and for the slight excess of male births. But basically, if women in their reproductive years average two surviving children, or one surviving daughter, a generation will simply replace itself, won’t it?

Humans are not fruitflies

Well, no! Humans are not fruitflies, where the generation of parents dies as their offspring are born. Children don’t replace parents, or even grandparents these days, but more often they replace great-grandparents. Hence if a generation of parents were to produce an equal-sized generation of children this would not mean the population had stabilized. In fact the population would not stabilize, at that rate, until the last generation to have more than 2.05 children had departed the scene. For instance, if India achieved so-called “replacement fertility” now, with all its couples in future averaging just 2.05 children, its population would still double, adding an extra 1 billion people!

Don't confuse the birth rate with the fertility rate!

Demographers need to clearly explain to journalists the difference between the Theoretical Long-Term Replacement Rate (TLTRR) and the Current Replacement Birth Rate (CRBR). The latter is the birth-rate that would currently (though not indefinitely) produce as many births as deaths. The only replacement rate that Australia could claim to be safely below is the Theoretical Long-Term Replacement Rate (TLTRR) of just over two children per completed family. But that is the replacement rate of an imaginary Australia, an already stabilized Australia, a society in which there would now be equal numbers in each generation.

[1] Overloading Australia by Mark O'Connor and William Lines, Published by Envirobook Sydney, 2008. The second edition is coming out soon in 2009. (The authors in Chapter 14, "Pyramid-selling Australia" kindly note that much of that chapter is 'endebted to' Candobetter's Sheila Newman's 'ground-breaking' research. Thank you Mark and William!)