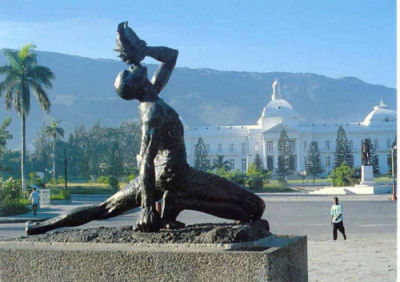 Haiti: There's no such thing as a curse
by

How often do we hear the expression "cursed" in conjunction with Haiti's situation? As if, rather than consider the real political causes, we would rather trust in God. It's easier. Less dangerous.

God doesn't send accounts, after all. God cannot be reelected or not reelected after 4 years. The recent history of Haiti is largely that of a dispossessed country, broken, a country that liberal economics has demolished.

It wasn't God that landed on the island in 1915 and occupied it for 20 years; it was American marines that allowed Washington to abolish the clause in the Constitution that prevented foreigners from owning businesses in the country. Thousands of inhabitants were dispossessed. Giant plantations were created. Because of an army that was busier fighting its own people than anything else, it was permitted for 1% of the population to own 50% of the resources of the country.

It wasn't God either that supported Duvalier's terrible dictatorship for decades, Duvalier who was more interested in enriching himself than in building a country worthy of the name. It was France and the United States.

And it wasn't God who overthrew Aristide, in 2004, after he had again abolished the army (as he had done in the 1990s, but was then overthrown by a coup d'Etat) and after he tried to oppose the privatisations and the external control of the country, but clearly and simply the United States, Canada and France, who replaced Aristide with the neo-liberal economist, Gérard Latortue.

It wasn't God who destroyed this country; it was Men of flesh and blood, Men who preferred to fill their pockets rather than to fight against poverty, to support a central government capable of applying stricter standards of housing or of fighting the deforestation that makes cyclones so much more dangerous.

Many other countries are hit by natural disasters. How many times has Cuba been touched by cyclones as strong as those that have hit Haiti? How many times has Japan been the victim of earthquakes just as violent as those which hit Haiti yesterday? It wasn't God that destroyed Haiti; it was Men. It wasn't God that protected the other countries; it was Men who decided it should be that way.

Sending a few dollars to Haiti is good, but that won't change the system. No-one is against charity, but you don't build a society on charity.

We could bury Haiti under thousands of millions of million billion dollars and the problem wouldn't be fixed. Haiti is the failure of a country without a strong central state, corrupted to the marrow, dispossessed of itself by ideological choices made by foreign countries.

Haiti is the result of a catastrophic history to which have been added the catastrophe of economic reforms that have diluted the power of the State, whilst creating a de facto libertarian paradise built on luck and make-do, where the lack of any social cohesion gives rise to the worst aberrations.

The best way to help the Haitians isn't to send them money. It is by demanding that each of our governments but out so that, finally, once and for all, the Haitians can be responsible for their bad luck and their good luck.

So that, finally, we stop blaming God and instead we look at what we Men can do for this destroyed land.

And perhaps, also, remembering that our governments have Haitian blood on their hands and that they are directly responsible for that unspeakable catastrope because of their persistent interference to stop Haiti developing.

We can add these tens of thousands of deaths to the tragic total of savage capitalism; they are less visible than the victims of 'communism', but just as dead!

Maybe that's another advantage of having God at your sides ...