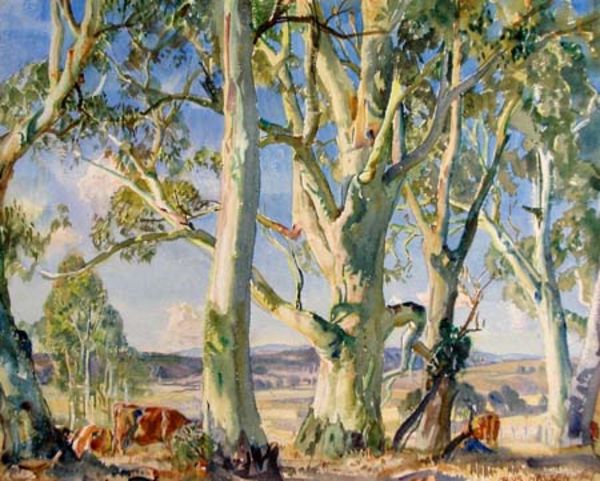 Sir (Hans) Wilhelm Ernst Hans Franz Heysen , OBE (8 October 1877–2 July 1968) was a well-known German Australian artist. He was particularly recognised for his watercolours of the Australian bush. He won the Wynne Prize for landscape painting a record nine times. Heysen was a conservationist far ahead of his time. He fought to preserve the flora of the Adelaide Hills—particularly the great red gums and white gums—and repeatedly warned of the dangers of destroying the natural environment. He also recorded the human activities of the region in great detail.

Hans Heysen's watercolours portrayed the river red gums as the guardians of inland Australia. He wrote: "The red gums in the creek beds fill me with wonder; their feeling of strength of limb, of vigour and life, suggest the very spirit of endurance."

Apparently, the “spirit of endurance” was no match for those in power who see not the forests but $$ in logging profits! If logging continues when 80 per cent of the landscape along the Murray has already been cleared, what is their future?

The NSW Labor government was once a conservation trailblazer. During the 1990s, forest management in eastern NSW was totally overhauled and in subsequent years millions of hectares of national parks were created towards a National Forest Policy targets for ecosystem protection in the escarpment and coastal forests and into the north-west.

However, even before the Victorian government’s outstanding decision to remove 90% of its forests from production, NSW forests provided five times the volume of timber compared to Victoria, from only 1.5 times the forest area.
.

This region is known to provide habitat for at least 69 plants and animals threatened with extinction, including species such as the Barking Owl, Regent Parrot and Southern Bell Frog.

Now a new Government report has painted a bleak picture for the future of the Riverina's iconic red gum forests.

A recent 260-page Natural Resources Commission (NRC) report finds the forests under serious stress, with many of the trees dead or dying and raises doubts about the capacity of some areas to continue to support wildlife.

The wetlands are a nationally important region recognised for sustaining large water-bird colonies. They form a part of the extensive lower Lachlan river wetlands and rely on river flows from the upper Lachlan, with the tributaries of the Belabula and Abercrombie Rivers.

If the drought conditions continue in line with climate change predictions, much of the existing forests that are home to numerous threatened species will not survive even in their current condition. The preliminary assessment of the forests was undertaken by the commission at the request of the Premier, Nathan Rees, following a long battle by environment groups to stop logging in the region.

The report says conditions in the Werai Forest are so bad that it could be gone within 50 years if drought conditions persist. 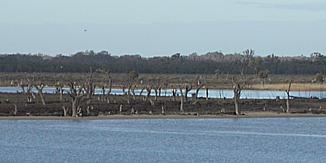 Gary Rodda, Forests NSW Riverina regional planning manager, said that in any given year about four per cent of the 110,000 hectares of river red gum available for harvest was selectively harvested.

“The red gum forests are sustainably managed for a range of social, economic, and environmental benefits that flow on to the community,” Gary said. “This harvesting process is carefully managed to ensure a patchwork of tree sizes and ages in the forest, which means there is a good selection of habitat for fauna and flora,” Gary said. Can anything in nature be harvested forever?

In 2007 The non-government National Parks Association of NSW (NPA) alleged the Government had not completed the required environmental impact statement before allowing logging of red gum forests along the Murray River. In September, Primary Industries Minister Mr Macdonald suspended logging in the 11 red gum forest compartments the NPA had complained about. The NPA found two endangered species - koalas and the black-chinned honeyeater.

2008 , THE New South Wales Government was accused of illegally logging almost 20,000 hectares of listed red river gum wetlands in the Riverina. "An estimated 7202 hectares of Ramsar wetlands and 1043 hectares of superb parrot breeding habitat (were) being logged …or are planned for logging in the next three months." However, this was denied by Ian Macdonald! A truce was called when Mr Macdonald agreed to conduct an environmental impact statement (EIS) on the logging if the NPA dropped its legal action.

In May, 2009 , it was reported that A superb PARROT was about to cost 1000 workers their jobs because the Federal Government has ordered a NSW timber industry to shut to protect the bird! No mention that the parrot was under threat from logging its home, its habitat!

The Daily Telegraph then learned that Federal Environment Minister Peter Garrett's department issued a stop-work order to the State Government, a move the industry claims could wipe out the entire southern NSW town of Deniliquin. 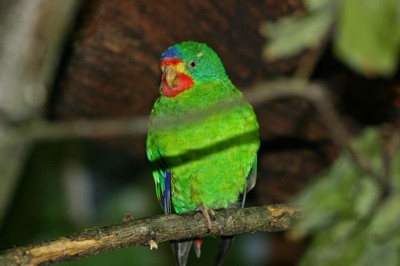 A Forests NSW briefing note obtained by The Daily Telegraph warned 11 sawmills would be forced to close overnight and 800 people would lose their jobs along with the closure of an industry worth $60 million to the NSW economy.

How often do we hear the argument of “jobs” and “economic benefits” to endorse environmental damage? The goalposts are continually moved in favour of communities and human benefits. It is a battle for the red gums vs a few short-term economic benefits and jobs that shouldn’t have been created in the first place. What about sustainability, often mentioned but rarely considered.

Tens of millions of paddock trees shelter livestock, nurture wildlife and save long-cleared farmland from appearing as bare as the desert. Surely if this devastation was caused by a “pest” species, shooters would be employed to “manage” them!

The Government in 2008 notes the National Parks Association report that has found a threatened species in the State's Red Gum forests. Detection of these species in State forests that have been managed for timber supply and grazing for many generations confirms that Forests NSW forest management practices are “environmentally sound”! Really? Nothing kills threatened species faster than loss of habitat.

The Ramsar listing that was supported by both the NSW and Federal Governments listed “timber harvesting” as one of the many uses of the Ramsar site. Maybe Ramsar needs to redefine conservation of wetlands.

UPDATE: August 2009
The Natural Resources Commission is undertaking an independent assessment of the River Red Gum Forests. This is a critical opportunity for us to press for the creation of new National Parks and as the NRC is accepting public submissions
The Red Gum forests act as filters for the river - if the New South Wales Government is serious about protecting the health of the Murray River, then it needs to protect our River Red Gums.

Write a submission for a new national park

Download a kit to write your own submission for the creation of a new national park.

The EIS, prepared by independent consultants, covers red gum forests in the central Murray, lower Murray and Murrumbidgee, and includes the towns and surrounding communities of Deniliquin, Barham, Balranald, Narrandera and Darlington Point.

Do “jobs” and “economic benefits” always have to win over the environment? The new national park should ensure a wildlife corridor for our diminishing waterbirds and other wildlife.

Email Premier Nathan Rees here by filling out the form