I was talking to a nursing friend who works in a large suburban Melbourne hospital emergency department, triaging patients for a particular area. I will call her Angie.

Given the high through-put of patients in the area in this time when we are supposed to be trying to reduce the transmission of coronavirus, I was curious to know what measures her hospital was taking to protect their staff and patients. 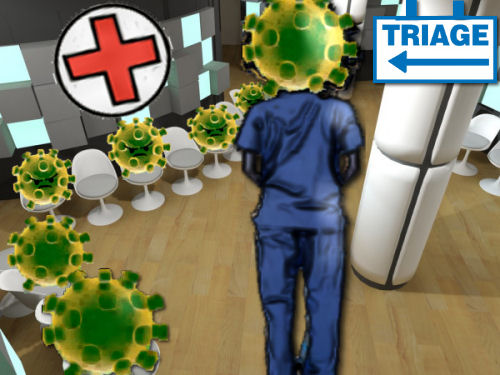 NEUTRINO: "You're not issued with masks for every new examination? You're not wiping down surfaces with alcohol or sodium hypochlorite, with every new patient? You are not even wearing gloves? You're not screening people in the waiting room for high temperatures?"

ANGIE: "That's right," she said, and laughed, as nurses do when they acknowledge helplessness at the behest of universally absurd hospital systems.

NEUTRINO: "Are they discussing policy with you, at least?"

ANGIE: "We get emails from them from time to time."

ANGIE: "Oh, just the number of infections in the state and the country."

NEUTRINO: "Do they tell you where they infections are and which hospitals are looking after them?"

NEUTRINO: "Then you're not getting any more information than the general public does from the news?"

NEUTRINO: "Are you going to cancel your trip to Japan?"

ANGIE: "Probably, although it seems to me we may be in more danger here. At least the Japanese have cancelled most of their public festivals and tourism attractions."

NEUTRINO: "They have also closed all schools and universities."

NEUTRINO: "Ambivalence rules infection control in Australia. For instance, in Sydney, one school where there was an infected pupil reopened a few days later, and the day it reopened, another closed with two infected pupils."

ANGIE: "So, would you like to meet for coffee at the Italian restaurant on my days off?"

NEUTRINO: "Please don't take this personally, but I'd rather we keep it to telephone conversations for the time being."

ANGIE: "I don't take it personally at all. I don't blame you. Telephone is fine."

ANGIE: "Although we could meet for coffee on the terrace of the Italian restaurant."

NEUTRINO: "How about we meet on a bench on the beach, and I'll bring a thermos."

ANGIE: "Okay, but I'll get my coffee from the restaurant."

Who in earth designed this VHIMS system and why haven't they been sent to prison? How many people have suffered by this? The Victorian Health Department relies on this evil joke of a system: http://www.health.vic.gov.au/clinrisk/vhims/ The policy of promotions by 'merit' somehow finishes up keeping anyone intelligent or principled out of executive jobs in this field. I have actually used the VHIMS system and the absolute failure of management to care that it made things worse contributed to my growing sense of danger and injustice. The attitude to safety and the law in public hospitals is absurd - no better than in Florence Nightingale's time. Hospital managers are reckless; they are laws unto themselves. Inside excerpt from Auditor General's shocking report on Victoria's hospitals.

During the site visits, VHIMS was found to be not fit-for-purpose as an OHS incident reporting system. It does not enable, as the Department of Human Services-Public Hospital Sector Occupational Health and Safety Management Framework Model (OHS Management Framework) states, 'a formal process by which accidents, incidents, near misses or potentially unsafe si tuations are reported to people with the responsibility to investigate and institute any required corrective ac tions'. Issues with the VHIMS system include:

- Some mandatory fields-such as whether the OHS incident was disclosed to visitors of patients-are of no relevance to OHS incidents as they are designed for clinical incidents. Repeatedly filling in irrelevant fields makes reporting unnecessarily time consuming, which can deter staff from reporting minor incidents and near misses.

- There are no fields to capture vital OHS information, such as:

For example, occupat ional violence can be classified as 'inappropriate contact' or 'physical aggres sion'. This limits the usefulness of aggregated management reports, and hinders accurate and consistent input by the reporting staff member.

- - The incident severity rating is also of questionable value as it:

- is based on clinical risk and is inappropriate for OHS incidents. For example, a patient needing medical attention as a consequence of a patient safety incident is rightly seen as significant and is assigned a high severity rating. On the other hand, staff needing medical attention after an OHS incident may not necessarily be given such a high rating.

- Does not capture probable consequences if the incident occurred again, or the likelihood of a repeat occurrence. A near miss arising from faulty equipment could have much graver c onsequences next time.

Interviewed staff report - and site visits confirm - that training in the incident reporting system is inadequate, with brief overviews given during staff induction and no follow-up training offered at any of the public hospitals visited. The system complexity requires a more in-depth approach, particularly for work ers who may not be computer proficient.

Of the 42 staff interviewed, 36 reported that the incident reporting system was not user friendly. All 16 OHS directors surveyed stated that they believe there is under-reporting of both OHS incidents and near misses.

This is a systemic and longstanding issue, as both the 2005 Victorian taskforce on violence in nursing report and the 2011 Parliamentary Inquiry into Violence and Security Arrangements in Victorian Hospitals and, in particular, Emergency Departments found that the incident reporting system was difficult for staff to use, and that under-reporting of OHS incidents was a significant issue.

Reporting was also not timely, which means that staff may be exposed to an OHS risk several times before control measures can be put into place or management is aware of the hazard. At one site, 87 per cent of OHS incidents were not entered into VHIMS within seven days of the incident occurring. No reason was given for this, although staff report that entering an OH S incident into VHIMS often has to wait until a shift is finished or a computer is available.

The VHIMS used by hospitals has been designed to capture clinical patient safety incidents and has not been appropriately modified to readily capture OHS incidents.
This undermines the stated departmental VHIM S project objective to 'develop a statewide, standard methodology, for the wa y incident information is reported within publicly-funded health services'. Figure 3A illustrates shortcomings in VHIMS for one particular OHS risk - occupational violence."[1]

After more than a decade working in one major hospital in Victoria, I came to the conclusion that management were on a power-trip and had completely lost touch with what hospitals are there for - to help seriously unwell people get better.

It seems that being able to rapidly fire orders downwards to an army of professionals and skilled workers who rely utterly on references from management and cannot answer back simply goes to the heads of those in charge.

The experience of many nurses is of a sadistic, self-indulgent management that employs specialist human-resources professionals to help them silence the complaints of their victims. Tools like the VHIMS are made to order for these bullies. Victoria's industrial laws are close to useless and health sector unions seem to be in league with hospital management. Thanks are due to the Auditor General for validating the perception of those who toil below decks in these whitewashed over-insured laughably credentialed concentration camps. There should be mass-sacking of Victorian Hospital Management, notably the CEOs of the four hospitals examined and their salaries should be redistributed to the lowest paid workers in those places.

The Medical Journal of Australia has published an article which looks at the devastating impact of population growth on public hospitals in Australia, as well as the more general impact of increased urbanisation, urban sprawl, and the reduced 'walkability' of neighbourhoods.

Here is an extract focusing on the problems public hospitals are already having coping with the demands of the current population.

"The Garling inquiry concluded in 2008 that the New South Wales health system is in a state of crisis.[13] This finding also applies to the rest of the states, with the possible exception of Victoria.[14]

An independent analysis by the Australian Medical Association has concluded that Australian public hospitals are dysfunctional, operating at full or above-full capacity, and urgently in need of increased capital funding. An important finding was that major metropolitan teaching hospitals operate on a bed occupancy rate of 95% or above. The report noted that hospital overcrowding was the most serious cause of reduced patient safety.[15]

It is clear that, even at Australia’s current population ...[*16A] the public health system is struggling to cope with demand. Changes will be required to deal with a vastly increased, yet still ageing, population and the attendant multiple comorbidities, many attributable to increased urbanisation.

Practical measures might include disinvestment (reallocating health resources from existing practices, procedures, technologies, and pharmaceuticals that do not deliver much health gain for their cost); investing in prevention; increasing the health workforce; and emphasising community health. Other measures might include increasing the role of practice nurses and expanding the role of pharmacists.

The increasing pressure on health services as a result of increased immigration might provide further motivation for a move to a single level of funding, with the federal government taking over responsibility for hospitals from the states. At the very least, this might end the “blame game” and cost-shifting that currently blights the system.

In his 2004 documentary Super size me, Morgan Spurlock suffered severe adverse health consequences after a 30-day period of eating super-sized meals at McDonald’s.16 Prime Minister Rudd’s vision of a super-sized Australia, while it might have some short-term economic benefits, will put further strain on the health system.

The plan to dramatically increase the population of Australia has to be debated and critically evaluated, and a population policy must be developed. In particular, health care professionals must engage with the federal government to ensure that it commits to and delivers on comprehensive national health and hospital reform, matching its appetite for unfettered, economically expedient migration to this country.

If this is not done, we — the citizens of a “big Australia” — will all, like Spurlock, suffer the damaging health consequences of super sizing."

Deborah Pelser, "Super size me: is a big Australia good for our health?"