Along with Dr. Joe Toscano, environmental activist, Jenny Warfe, has decided to stand as a radical independent for the Federal senate in the forthcoming election. Jenny Warfe is well-known in Melbourne (along with her brother Len Warfe), especially along Port Phillip Bay, for a David and Goliath fight she led for years against the shockingly undemocratic and anti-environmentalist channel deepening in the Port. The group of friendly independents, has decided to give their preferences to The Greens. On the senate ballot paper Dr. Joe Toscano will be the lead candidate and Jenny will appear below him as the second of three radical independent candidates. Joining with Dr. Toscano and third candidate Andrew Sadauskas means that the group will be allocated a box ‘above the line’ on the senate ballot paper. Thus voters can Vote 1 above the line for them without having to number every one of the sixty or so boxes below the line.

Why is Jenny Warfe standing and why as an Independent radical?

Jenny says that she has thought about the use of the term ‘radical’ and has decided that she is comfortable with it since she sincerely believes that we do need radical thinking and radical change in order to respond effectively to the huge environmental, climate and population challenges in the 21st Century. She states that she is also happy to be a running partner with Dr. Joe Toscano whose work she greatly admires. Here is her election information page.

Dr Toscano is well known to candobetter.org through his cheerful anarchist media broadcasts. In these broadcasts he shows a strong understanding of the value of relocalisation, local democracy and public space.

Joe Toscano is a medical practitioner specialising in the care of people with spinal injuries. He often travels to see his patients by train and does not dress or act like a money-driven professional. He is loved and respected for his many years of community activism including civil liberties and Australia’s anti-terrorism legislation, Defend and Extend Medicare and the Friends of OUR ABC campaign. He is a source of information on Australian history and activism and is associated with Eureka Stockade commemorations in Ballarat.

Jenny's decision to stand for the senate was made because of years of frustration about the present parliamentary system and the apparent abandonment of any commitment from state and federal major party MPs to actually represent the majority of their community or to consult their constituents before making decisions on many contentious issues.

"In my area of experience - planning and environmental issues – many MPs have championed or at least condoned appalling destruction of our built and natural heritage. Sadly, it seems running rallies, public meetings, collecting thousands of signatures on petitions, requesting meetings with our elected representatives, letter writing campaigns, and even legal action in the Supreme and Federal Courts will not stop a government determined to wreck the environment and determined not to listen. What else can we do?"

She adds that she finds it disheartening that the marvellous efforts of so many good people in so many exhausting community campaigns have largely been ignored by the current decision makers. Instead, she says, "We have been lumbered with so many projects put up by developers/corporations who usually have no discernable commitment to our environment or way of life."

"Inappropriate, unnecessary and unwanted projects have been given unquestioning and fervent support from so many ill informed and/or compromised politicians. They have ignored what their constituents want in favour of what a handful of corporations or developers want."

After observing this repeating theme so often in recent years, Jenny has decided that

"Whatever the effort put in by so many well informed and dedicated people in the community, a perverted system of governance has allowed awful projects to just roll on and over the top of us."

In Jenny's view, the present parliamentary system has been irrevocably altered by the dismembering of what was largely a frank and fearless public service which had generally served us well for decades.

Knowledge and wisdom in many government departments has been jettisoned and instead we now have a shamble of “political advisers” on short term contracts directing decision making.

Added to the entrenched party machinery and the easy opportunities for influential and vested interest groups to purchase favour for whatever they want, our system of governance has changed dramatically.

Concerned citizens or communities are no longer of any interest to the current crop of decision makers. In 2007 Australians elected a new Federal government in large part because they wanted action on climate change. They are still waiting, and will be for some years to come it seems.

Conversely, Australians weren’t even asked their opinion on whether Mr. Rudd’s proposed super profits mining tax should be abandoned but it was, very swiftly, and just because a few billionaire miners made a fuss.

"In Victoria, the Wonthaggi De-Sal, NS pipeline, Peninsula Link freeway through heritage listed Westerfield property, changes to urban growth boundaries, multi storey developments throughout the suburbs, Port expansion, etc. etc. have all been forced on communities who don’t want them by people who don’t know or care. At best, what community input there is has become a formulaic box ticking exercise by government and developers’ consultants. Necessary for them to show that they have “consulted”, but useless for us."

Jenny observes, in her campaign letter, that,

"For the 3 or 4 years of his/her incumbency a politician has no obligation whatsoever to vote in parliament according to how she/he campaigned and was elected, or how the majority of their constituents might subsequently ask them to vote. Once an MP from either major party has been elected, the faceless lobbyists then swing into action to subvert the decisions that we voters have made. We then wait another 3 or 4 years to vote out the politician who has so bitterly disappointed us. And so it goes on."

In her opinion, at the very least, surely our elected representatives should be required to conduct statistically robust polls in their electorate to guide how they vote on any contentious issues before them in parliament. "With the resources MPs have at their disposal (all paid for by us) this should be a simple task," she explains.

She gives the example of Craig Ingram's electoral survey on a contentious question:

"Last year Independent Victorian MP Craig Ingram surveyed his electorate on the abortion reform debate. His electorate overwhelmingly supported reform so that’s the way he voted. Every other MP proceeded with a “conscience” vote without any obligation whatsoever to consult or inform their electorate. As it stands, for most of the time that is precisely what most of them do - ignore almost everyone that voted for them!

Achieving fundamental change to our system of governance is a huge task, and I don’t really expect to realise my dream for a better and fairer society on the 21st August 2010. But - I do believe that to achieve change we need to persist, perhaps for a long time and perhaps at first we won’t succeed. However, reform always comes from the minority position and change only happens when a concerned group of people ask for it. If a few brave people in history had not thought that way we would still be engaging in slavery and sending children up chimneys wouldn’t we? As Margaret Meade put it: “Never underestimate the power of a small group of dedicated people to change the world. Indeed it is the only thing that ever has.”

Hope to kick-start community preparation for a very different future

In standing for election, these radical independents hope to kick start community discussion on a new way to prepare for the very different future we face in the 21st Century. Jenny Warfe is sure many of people will agree that the dominant paradigm is not serving us well at present. For most of the time, debate is steered by the small coterie of influential industry and other corporate groups, ably assisted by a supine media.

"Under these conditions," she says, "Most politicians have become mostly irrelevant to most of us most of the time. But- at election time, there is at least a small window of opportunity to challenge the dominant paradigm, and help set a new course for spaceship Earth."

Each state has 12 senators in Canberra, see: http://www.aph.gov.au/senate/senators/homepages/index.asp?sort=state. At present Victoria has Liberals 6, ALP 5 and Family First 1. That’s a pretty boring mix in my view, capable of maintaining the status quo and not much else.

Election 2010 will elect 6 senators from each state to replace the half whose term expires next year. For Victoria see: http://www.tallyroom.com.au/election-2010/vicsen2010

"Election 2010 is our chance to demonstrate that it’s time for a broader range of views from our 12 senators – and who knows, if political debate became more diverse more people might be encouraged to take an interest in the civic space".

If you want to help what can you do?

Have a look at the attached policy issues which the three candidates have agreed upon. Although you may not agree with all their ideas, perhaps you aren’t happy with much of what the major parties have achieved in the past and are offering for our future either?

If so, take this opportunity to express your dissatisfaction with the status quo and give them your vote. It’s one of the few effective ways left to demonstrate what you really think about our current governance arrangements.

The three candidates will appear something like this, somewhere amongst 60 or so others on the (large white) Senate ballot paper: 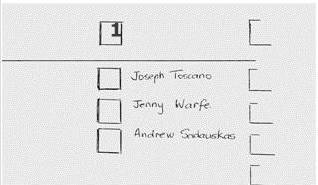 If you don’t want to number every box on the large white senate ballot paper and are happy to just Vote 1 for change, just put 1 in the box above the line above the column with our names in it, as shown above.

Remember, if you do vote 1 above the line, your preferences will go to The Greens. If you particularly want to Vote 1 for Jenny, you will need to number ALL the sixty or so boxes below the line in the order you prefer.

So - if you are unhappy with the way things are, please consider using your senate vote to show that you think it’s time for some changes.

You may copy the radical independents' policy statement (see link below), and letterbox it or hand it out before or on Election Day.

You can also help by forwarding this article on to everyone you know in Victoria, and getting that policy statement onto any website you can, and talking about the three radical alternatives on Facebook and Twitter.

Your support may make a real difference to our future.