The Syrian Girl adds her insight to the attempts by US war criminals Barack Obama and John Kerry to isolate Russia and extend the New World Order into Ukraine and Venezuela. As usual the mainstream media, including the ABC, SBS, Fairfax, the Murdoch press, etc., are concealing facts which would harm the image of the US rulers and its allies, including new rulers of Ukraine, including neo-nazis. Includes embedded broadcast by the Syrian Girl.
See also: About Ukraine.

by Stephen Gowans. Originally published on Global Research on 1 November 2013 as Friends of Syria or Friends of Imperialism?. This article includes main points. 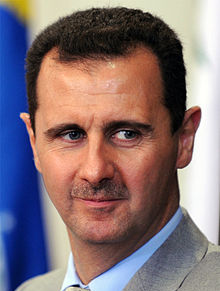 "Friends of Syria" would deny Syrians the right to choose this man to be their President.

The coalition says that the current president, Bashar al-Assad, must have "no role in Syria." How odd that an ostensibly democracy-promoting coalition should dictate to Syrians who it is who can't be president of their country, rather than democratically leaving the question up to Syrians themselves.

The coalition says that the current President, Bashar al-Assad, must have "no role in Syria." How odd that an ostensibly democracy-promoting coalition should dictate to Syrians who it is who can't be president of their country, rather than democratically leaving the question up to Syrians themselves.

Equally strange is that half of the coalition members do not support democracy in their own countries. Five of the 11—nearly one-half—are not, themselves, democracies, but are monarchies and emirates (Jordan, Qatar, Saudi Arabia, and the United Arab Emirates) and one, Egypt, is a military dictatorship.

The formal democracies that make up the coalition's other half—the United States, Britain, France, Germany, Italy and Turkey—are not promoting democratic transitions within the territories of their coalition partners, limiting their intervention to Syria alone.

Yet, while Syria has hardly conformed to the Western model of a multi-party democracy, it is not at all the undemocratic dictatorship it has been made out to be. It is not, for example, a Saudi Arabia. It has a parliament. It is anti-colonial and anti-imperialist. And parts of the state, much to the annoyance of the US State Department, remain committed to socialist goals. Presidential elections are scheduled for 2014. Any Syrian, so long as he or she meets minimal basic criteria, is free to run. If Syrians don't want Assad, they'll be free to toss him out then.

On the other hand, coalition member Saudi Arabia is a family business. The Saud family calls the shots. There's no chance they'll be tossed out in elections, since they'll never have any. If Washington were truly interested in cobbling together "Friends of" coalitions to promote democratic transitions in undemocratic countries, it would have long ago put together a Friends of the Saudi People group.

Not that the United States ought to be ranging the globe, foisting its brand of democracy on others. Rather, its selective commitment to democracy promotion (only in countries not under its thumb but not in satellite states), speaks volumes about what US foreign policy is really about—and just how far removed from a meaningful democracy the US version is.

Equally fatal to the idea that the Friends seek democracy in Syria is this: one of its number, Egypt, is ruled by a government installed by the military, after it ousted a democratically-elected government. The charge that Syria's Assad has to go because he is killing his own people (insurgents) hasn't stopped the Egyptian military from killing demonstrators who call for the restoration of their elected government. They deserve the appellation "pro-democracy protestors" more than do the Islamist insurgents who used turmoil in Arab countries to inspire a return to jihad against the secular Arab nationalists in Damascus.

And what of the coalition's formal democracies? All are former colonial powers. They cared not one whit about democracy when they held the greater part of humanity in colonial thrall, including the people who lived in what is modern day Syria. By their actions and duplicity, they've revealed themselves to care as little about democracy in the Arab world as they did when four of them (the Turks, Italians, British and French) ruled Arabs by edict from afar.

Six former colonial powers in a coalition with five tyrannies, telling Syrians who they can't have as president, supporting a group of exiles who wait in the wings for the signal to traipse onto the Syrian stage as Washington's marionette, is hardly the picture of democracy-promoters. If you believe otherwise, then democracy is nothing but a euphemism for imperialism, an emotionally appealing word tossed around as a cover for the very negation of what the Friends of Syria profess to seek. 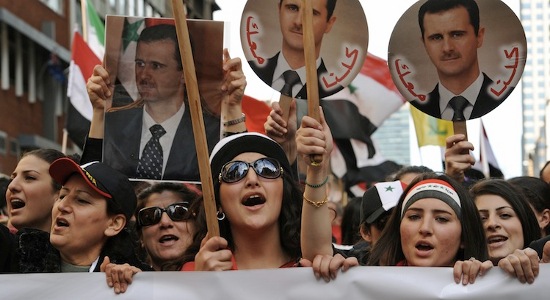 The Universal Declaration of Human Rights, adopted by the United Nations in 1948, is a crucial document. The first 21 Articles of the Declaration all profess classical Western rights, also called liberty rights or “negative rights,” including the right to private property, freedom of speech and equality before the law. Universal human rights ideals are contrary to human nature, over-ride national and individual rights, fail to consider the finite nature of our planet, the limitations of multiculturalism, and the "success" of the human species.

This promises a world in which human beings are ensured the ideology of freedom of expression and be protected against fear and poverty. Unfortunately, however, reports by the United Nations Development Programme spell out the rise of a disaster which distances us from the idealistic this world. Our world is facing complex global scale problems, such as war, religious intolerance, conflict, violence, hunger, poverty, illiteracy, pollution, crime, theft, fraud, murder, corruption, immortality, child abuse, human rights violation, oppression, inequality, injustice, nuclear weapons, overpopulation and global terror among others.

Multiculturalists state specifically that our societies should be based on the principle of various ethnic groups only united by “human rights.” But this is a weak "glue" for a society, to say the least. This means that your rights to decide the future of your society and your country, for instance in managing your immigration policies, are decided by our leaders and out of our hands. Originally meant to be a core of rights ensuring political and individual liberty, today human rights are increasingly used for the opposite purpose. They claim other people’s resources, property etc as a universal "right" of access! The very notion of human rights suffers from a kind of contradictory ideals .

Multiculturalism presumes the peaceful coexistence of many cultures within the boundaries of a single political unit (usually a nation). These ideals sound good, but humans are complex and they prefer boundaries, and thus they fail.

We have been brainwashed for decades in Western nations that we must embrace mass immigration for many reasons including the most popular - population growth, demographic imbalances, economic growth, and population decline.

The call for a "new world order" in 1990 raised optimism among people worldwide.

It refers to the emergence of a bureaucratic collectivist one-world government. Further, the new draft sketches a world in which there is one dominant military power whose leaders ‘must maintain the mechanisms for deterring potential competitors from even aspiring to a larger regional or global role’. For the poor, the majority of whom are people of colour and indigenous, the "new" seemed to be very much like the old. Changes in the global economy continue to favour the few, the elites. To them, it makes more sense to open our borders, invite illegal immigration, and risk rising lawlessness and terrorism. In fact, each such crisis becomes a potential instrument for change! Former President George H. W. Bush echoed that assurance. Out of these troubled times... a new world order can emerge.

Whose "human rights" should take precedence?

Moreover, who decides which “human rights” should take precedence? If you say that free migration should be a universal human right, you trample on the rights of the peoples at the host end of mass immigration to preserve their cultural heritage. Should Muslim nations, or overpopulation nations, be allowed to dump their unsustainable population growth in the West? Sharia laws tend not to respect human rights, allowing them to undermine countries that do respect individual rights. Democratic principles means that "human rights" will become a tool for undermining democratic nations in favour or totalitarian ones, precisely the opposite of what was originally intended.

Overpopulation not being addressed

We still have millions of unintended pregnancies, often resulting in unsafe abortion or maternal or infant death; and continuing rapid population growth in the world's poorest countries. Population growth, migration to urban areas, conflicting needs for existing land, and insufficient financial and natural resources have resulted in widespread homelessness and habitation in inadequate housing.

Migration from a country tends to encourage those who stay to have larger families and that when migration possibilities are reduced, population growth declines, thereby enhancing the prospects for improved well-being. Boundaries - to aid and migration - mean that populations are more likely to care for their own territories.

Westerners are the suckers of the 21st century. We fail to support our own interests and cultures. We exist solely as a vehicle for funding other nations, and as the obedient dumping ground for their excess population growth. How can Australia be selling off farm land, industries and water rights to overseas interests?

The Universal Declaration of Human Rights affirmed that all human beings are born free and equal in dignity and rights and that all persons have a right to satisfaction of economic, social, and cultural needs. The convention on elimination of all forms of discrimination against women referred in its preamble to the particular disadvantages of women living in poverty.

Population growth which outpaces increases in production will make it increasingly difficult to satisfy the rights and needs of all population sectors. Contraception is a legitimate means of achieving this end.

We are, as a species, too successful and our success contains the seeds of not only the failure of the natural environment, but our own too.