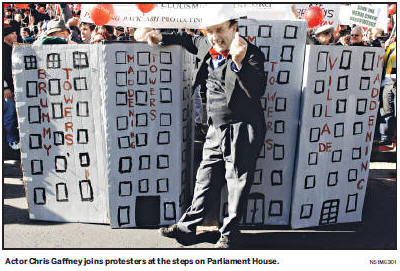 Ed. The following story is adapted from the MRRA Macedon Ranges' Residents Association site: It describes a really important battle in the ongoing war for democracy in Victoria which will probably be reported on in other articles at candobetter.

Where to from here?

The day after the "Restore Residents Rights" rally at parliament house on June 10, which was attended by 600 [1] people, Victoria's upper house rejected changes to the Planning and Environment Act that would have introduced Development Assessment Committees [DACs] to the State.

It's uncanny. Two cities on two continents, but Growthists in Vancouver and Melbourne seem to be reading from the same playbook. Lance Berelowitz, an urban planner who chaired Vancouver's planning commission, praised the Mayor's so-called "Eco-Density" initiative as the answer to the city's ever-increasing house prices. Given that between 800,000 to one million new residents are expected to come to Greater Vancouver in the next 25 years, it can be assumed that developmental pressures on the city's limited land base will steeply drive up land costs. It follows then, that "housing prices in Vancouver will keep going up, unless we substantially increase the housing supply to match the aging demand."