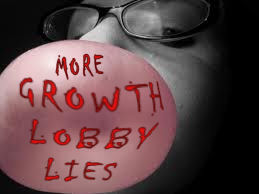 Your ABC will be giving yet more air-space to commercial growth lobbyists who will be spruiking at the Wheeler Center tonight. Publicity for the event actually claims that high density living is "great for the environment." In fact, the Australian Conservation Foundation's Consumption Atlas shows that greenhouse gas emissions of those living in high-density areas are greater than for those living in low-density areas. An analysis of the data shows that the average carbon dioxide equivalent emission of the high-density core areas of Australian cities is 27.9 tons per person whereas that for the low-density outer areas is 17.5 tons per person. (Free Event TONIGHT 12 OCT 2011.)

Wheeler Center - another festival for malignant Growth to be amplified by Your ABC.
The Wheeler Center will be hosting a predictable event called, "Seven Billion, it's getting crowded in here," on Wednesday 12th 6.15pm at 176 Little Lonsdale Street, near Russell St.

Publicity for the event kicks off with a completely erroneous statement that "High density living is great for the environment."
We can expect that ignorant assertion to dictate the level of discussion. The advocates of growth seem willing to say anything and repeat it ad nauseum in the appearance of justifying their totalitarian push for developers to maximise their financial returns. Sadly, Your ABC seems happy to promote the malignant growth virus.

"High density living is great for the environment, right? But what does it do to our heads and hearts? The Australian psyche was moulded by the myth of the ‘wide brown land’, so what might life packed like sardines look and feel like? With the world’s seven billionth person is about to be born, can we learn from the Asian megacity experience? And will we still be sharing a cup of sugar with our neighbours? As the population debate gets mental, we’re going in search of the soul in urban sprawl. Hosted by Natasha Mitchell and featuring Kim Dovey, Helen Killmier, Bernard Salt and Sein-Way Tan. Presented in partnership with ABC Radio National."[More about the speakers in note [1]

What does the 'environment' mean to the person who wrote that ridiculous statement? Obviously not fans of biodiversity. Do they actually like landscapes destroyed by coal mining, gas fracking and sand-mining?

But there is a mountain of evidence to show that, not only is high density living unpleasant and reduces options for self-sufficiency, it uses much more energy than ordinary low density blocks:

"On the Green advocacy website Planetizen.com there is an interesting new piece entitled "Resisting Dickensian Gloom." This article cites several new Australian studies that refute the whole notion that we can build our way out of Global Warming. Australia, which bought into the high density dream early on and now has vast swaths of the stuff, apparently now has cause for a little bit of buyer's remorse. Here is a part of what this article has to say:

A comprehensive study of per capita emissions in Australia based on household consumption of all products and services appears in the Australian Conservation Foundation's Consumption Atlas. Unexpectedly, this analysis shows that greenhouse gas emissions of those living in high-density areas are greater than for those living in low-density areas. An analysis of the data shows that the average carbon dioxide equivalent emission of the high-density core areas of Australian cities is 27.9 tons per person whereas that for the low-density outer areas is 17.5 tons per person. As mentioned in the Demographia Survey introduction, food and goods purchase account for most of the emissions and this amounts to more for wealthier inner-city dwellers.

Surprisingly, transport emissions amount to very little (only 10.5%), household electricity and heating fuel being about twice as much at 20.0%. It should also be noted that the emissions from household dwelling construction and renovations at 11.8% are greater than emissions for transport. It is clear that transport, so heavily emphasized by Smart Growth advocates, is responsible for only a small fraction of household emissions.

The article goes on to cite a few more studies, all of which come to the conclusion that packing people into urban core development might not be as "green" a thing as advocates such as noted ecologist Arnold Schwarzenegger have claimed. Which means that low density communities such as Sierra Madre might very well be the greenest possible solution after all. And that Sacramento, along with SCAG and 40% of our current City Council here (they're the ones that talk a lot), should really go find some other way to save the world.

Hopefully one that might actually work.
Posted on the Sierra Madre Tattler at http://sierramadretattler.blogspot.com/2010/02/high-density-development-actually.html

Sein-Way Tan - serves on the Advisory Board of Global Urban Development, Climate Prosperity Alliance and Data Cities. Sein-way’s consultancy is advising the Chinese government on its sustainable cities policy, and the UN Habitat’s World Urban Campaign. His research focuses on rapid global urbanisation and is conducted in collaboration with more than 400 global leaders in politics, business and environment.