This has been adapted from an e-mail from asumofus.org. Original story here.
See also: Russian law requires registration of "NGO carrying out functions as a foreign agent" of 13 July 2012 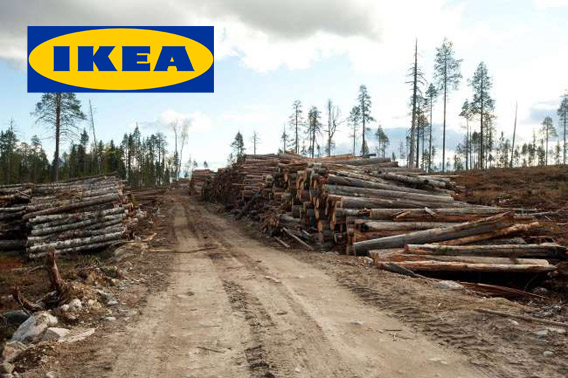 The roar of a chainsaw shatters the peaceful calm of the Karelia forest in Northwestern Russia. A logger carves into an exquisite giant -- a 600-year-old tree -- with expert precision. Within minutes, he has masterfully sliced through tree rings, added the felled tree to a growing pile, and moved on to the next.

These trees -- part of Russia's last remaining old-growth forests -- will be chopped up to make cutting boards, wooden spoons and other items for IKEA. IKEA has built a reputation around sustainability and tells its customers, literally, "We Love Wood", and that the furniture they buy will not contain wood from old-growth forests. But a new report shows that IKEA is clear-cutting Russia's remaining ancient forests and destroying hundreds of thousands of unique animal species for profit. If it doesn't stop now, there may be no trees left.

IKEA is the third-largest purchaser of wood in the world, behind Home Depot and Lowe's, and roughly 60 percent of the products stocked in IKEA's 300 department stores across the globe contain wood of some form. IKEA already decimates 1,400 acres of forest a year -- that's why it purchased this enormous swath of over 740,000 acres of Russia's Karelia lush boreal forests -- for expansion.

IKEA is trying to convince customers that it adheres to the strictest environmental standards, and only uses wood sourced in economically, socially, and environmentally sustainable ways. But a Swedish conservation group discovered that IKEA's wholly-owned subsidiary, Swedwood, is clear-cutting the last of Karelia's old-growth forests from areas of high conservation and devastating invaluable forest ecosystems in the process. This directly violates the minimum requirements IKEA has set for its timber.

IKEA truly cares about its sustainable image and internationally-known brand and is especially vulnerable to public pressure from SumOfUs.org members. That's why it is important we send a strong message now.

As a world leader in the furniture industry and one of the world's largest companies, with over $30 billion in profits between 2000 and 2008, IKEA has the means to make its forestry practices more ecologically friendly and needs to stop misleading its customers.

Thanks for loving trees,

Emma, Taren, Kaytee and the rest of us

Why are old-growth forests so important?

Russia's lush, old-growth forests perform vital functions for life on Earth. They help to stabilize the climate by locking carbon in the soil -- which helps safeguard our climate. In addition, old-growth forests have much greater biodiversity than managed plantations, and are home to literally hundreds of thousands of unique animal and plant species, like rare species of lichens, mosses and other plants and animals. These species cannot survive in secondary forests.

But because of logging, only 10% of Russia's old-growth forests remain.

NGOs claim that IKEA, through Swedwood, is helping to destroy ecosystems that are home to endangered species by clear-cutting already depleted old-growth forests. In Karelia, only isolated tracts and pockets of old-growth forests remain.

In Russia, Swedwood Karelia LLC owns a logging concession of over 740,000 acres. And with Russian markets increasingly opening to the global market, and World Trade Organization (WTO) membership likely, environmentalists fear the worst damage to Russia's forests is yet to come.

IKEA under fire for ancient tree logging, The Guardian. May 29, 2012. (Editorial comment: Although the Guardian has, to its credit, taken a principled stance on this issue, it has been publishing lies about the conflict in Syria. These lies could well make it possible for the US, it's NATO allies, Israel and the Arab dictatorships to carry out their plans to launch a war against Syria and Iran. The ecological cost, not to mention the human cost, of such a war could hardly be less terrible than IKEA's destruction of Russian rainforests

Proposed revisions to the Code of Practice for Forestry in Victoria Australia could adversely impact Victoria's threatened species. As many candobetter.net readers know, the Victorian Auditor General found last year that Victoria has utterly failed in its objectives under the Flora and Fauna Guarantee Act (1986) to measure and protect unique species from threat and endangerment. These changes also follow Environment East Gippsland's historic win in court against VicForests last year, where EEG sought protection under this Act for endangered species. With these changes, loggers could seek exemptions from state environment laws protecting endangered species. Victorians (and people all over the world) need to be aware of these proposed changes and to make comments. You can make a submission via this article

According to comments reported in the Age, 3 November 2011:

The Secretary of the Department of Sustainability and Environment would be able to exempt a logging project from the requirements of the Flora and Fauna Guarantee Act, which protects the state's endangered and threatened species.

"The proposed changes follow a landmark ruling in the Supreme Court last year banning VicForests from logging old-growth forest at Brown Mountain in East Gippsland, after an endangered long-footed potoroo was filmed in an area to be felled."

"The secretary will consider, among other things, the numbers required to maintain a viable population of a listed species in the area to be logged, and the amount of habitat near the proposed coupe already protected in national parks."

''The objective of the variations is to achieve a better balance between the protection of threatened species and sustainable timber production from public native forests.'' Source: Tom Arup, "New state law in the pipeline to aid loggers."

The Code of Practice for Timber Production 2007 (the Code) is a key regulatory instrument that applies to commercial timber production in both public and private native forests and plantations in Victoria. It is a statutory document prepared under Part 5 of the Conservation, Forests and Lands Act 1987. Compliance is required under the Sustainable Forest (Timber) Act 2004 and via its incorporation into the Victoria Planning Provisions.

The purpose of the Code is to ensure that commercial timber growing and timber harvesting operations are carried out on both public land and private land in such a way that:

Code of Practice for Timber Production 2007

Members of the public are invited to provide comment on a number of proposed variations to the Code of Practice for timber production to improve certainty of timber supply to the native forest timber industry, while balancing the needs of the environment.

The following document outlines the proposed variations to the Code of Practice for timber production.

Proposed variation to the Code of Practice for Timber Production 2007

[PDF File - 162.3 KB]
Proposed variation to the Code of Practice for Timber Production 2007

If you have problems downloading this document, please contact the Customer Service Centre on 136 186 for assistance.

The proposed variations change the wording in relation to the application of Flora and Fauna Guarantee Action Statements. This aims to introduce more flexibility and allow further consideration of the importance of Victoria’s national parks and conservation reserves in the protection of threatened species.

The variations will improve the focus of conservation for threatened flora and fauna species to be applied at landscape level, and allow for a reduced focus at the individual animal or plant level.

Factors needing to be considered by the Secretary to the Department of Sustainability and Environment in determining the application of a Flora and Fauna Guarantee Action Statement are also being considered for inclusion in the Code.

Anyone interested in making a submission on the proposed variations should provide their comments to DSE in writing by:

Review of the Code of Practice for Timber Production

Department of Sustainability and Environment

Closing date: submissions must be provided by Wednesday 1 February 2012. Submissions received after this time may not be able to be considered.

Compliance with the Code of Practice

The Code refers to various laws and policies that may be subject to change. Links to state policies and other information relevant to the Code are provided below.

Please note: Document(s) on this page are presented in PDF format. If you do not have the Adobe Reader, you can download a copy free from the Adobe web site.