It seems that we are under the impression that Mother Nature will award us points for effort. If we do our best and try living less unsustainably, she will forgive us our sins and let us stay in the game because, well, surely she realizes that we are something special---and should get special treatment. But the truth is, this lady is not for turning. She is one 'hard-ass', a referee that cannot be swayed by our histrionics or our pleading. We have got to understand that she has her own schedule, and will not hold up the train for us. 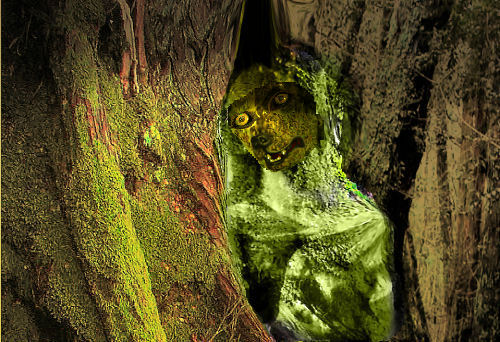 In the wake of an announcement by Transition Towns College in Pennsylvania to hold a workshop about an "Energy Descent Action Plan" that would outline a model for developing strong sustainable communities and strong local economies less reliant on fossil fuels, Mother Nature issued a press release today announcing her Energy Descent Action Plan, which was apparently formulated without public participation.

Despite her declaration that this plan is non-negotiable, she nevertheless invites all stakeholders to present their amendments and counter-proposals at the upcoming General Meeting on Earth day---if that is what makes people feel good about themselves. But she warned that she will not be attending the meeting---- explaining that she is disinterested in our input, doesn't give a damn about prospects for survival, and doesn't accept our credentials as an exceptional species deserving of special consideration.

As could be predicated, the announcement was met with incredulity and outrage. Eco-socialists complained that her plan was unnecessary, fascist and Malthusian. There was no need for energy descent because there is enough energy to go around, if only the rich were made to pay and share the wealth. Dump capitalism and this phoney energy crisis would be unmasked for what it is, a capitalist plot. Monbiotists argued that the plan was scapegoating the poor for the sins of the rich, and if Canadians stopped hogging energy and learned to freeze in the dark for 5 months a year, then there would be no energy shortage. Feminists from Hampshire college joined in on the swarming, claiming that Mother Nature was blaming women for climate change and peak oil, and if only women were "empowered", they wouldn't demand so many natural non-renewable resources. Finally, human rights advocates demanded that the poor, the oppressed, the marginalized, gays, lesbians and transgendered 'people of colour' be exempted from her austerity measures. Apparently, however, these entreaties and demands fell on deaf ears.

When she was told that we are trying our best to live more sustainably or rather, less unsustainably, and that we are determined to build resilient, self-sufficient communities, she appeared unmoved. Sounding like Vince Lombardi, she is reported to have said that "Either you make the cut, or you don't. Living within your resource budget is not everything. It is the ONLY thing."

That statement did not go down well with identity groups. "We won’t accept these cuts !", they exclaimed. "Billions of innocent people will die.... our species may even go extinct. "

It was at that point that, reportedly, Mother Nature shrugged her shoulders and replied, "What the (expletive) do I care?"

It is rumoured that another wave of "Occupy" demonstrations will be planned, modelled on the one that took place on Easter Island in the 17th century, when protesters demanded an end to income disparity and debt slavery as a solution to restore old growth forests. (No mention was made of overpopulation however, because it was thought to be a red herring employed by the rich to blame the poor for their own excess, besides, if women had been empowered, they would have chosen to give birth to fewer loggers.)

It now appears that we are at an impasse. We have bargained in good faith. We have tried to meet Mother Nature half-way, and moderated our demands in the hope that our sacrifices would provoke reciprocal concessions. But Mother Nature doesn't seem to understand that successful negotiations involve give-and-take. We have agreed to cut our consumption of natural capital in half and slow our use of natural resources that cannot be replenished. But we are obviously dealing with an intractable opponent.

Nonetheless, we must remain confident that by our resolute solidarity and determination to secure special treatment, we will convince her to give way. Either that, or thanks to human ingenuity, we will come up with alternatives. After all, we always have before, haven't we?