Video and transcript below: SOPA stands for "Stop Online Piracy Act". "Just as the printing press led to the widespread publication of the Bible in the vernacular and ultimately to the Reformation which forever transformed the power structure in European society, so too has the internet allowed the public to receive, correlate and distribute information that challenges official government narratives." This threatens the powerbases of our self-appointed masters and they will do anything to stop it. 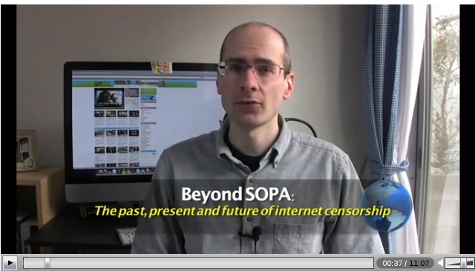 Beyond SOPA: The Past, Present and Future of Internet Censorship

By James Corbett
grtv.ca
29 January, 2012
(Originally published on the Corbett Report at http://www.corbettreport.com/beyond-sopa-the-past-present-and-future-of-internet-censorship/.)

When legislators in the US abandoned their support of SOPA and PIPA in the wake of mass popular protest earlier this month, many of those who had been mobilized by the legislation–which would have granted the US government almost total power to block access to foreign websites accused of so much as linking to copyrighted material–did not have long to enjoy their “victory.” The very next day the New Zealand police swooped in to the million-dollar estate of MegaUpload.com founder Kim Dotcom, arresting him and three others at the US government’s request for alleged racketeering, copyright infringement and money laundering. The Department of Justice is now seeking the MegaUpload CEO’s extradition to the US.

Some amongst those who had been campaigning against SOPA and PIPA did not know that the US government already had the authority to shut down entire websites and in fact has exercised that authority on numerous occasions. What many are now learning is that, far from some potential future threat, internet censorship already exists in a variety of legislation that is already on the books in the United States and in nations around the world.

Although most commonly associated with China, which has implemented strict internet filters that prevent its citizens from finding politically sensitive material, various internet censorship programs have already been implemented by countries around the globe.

In 2010, Japan passed amendments to its copyright law making it illegal to download copyrighted material. The move has yet to curtail file-sharing in the country, so the Japanese government recently announced that they are going to begin putting fake copies of popular tv dramas on file-sharing websites that, when opened, remind users that it is illegal to download such material.

In July of 2010, the US Immigration and Customs Enforcement seized the domains of 8 websites that it accused of hosting illegal copies of copyrighted material as part of an investigation dubbed Operation In Our Sites. The seizures came before any trial took place, and six of the websites did not actually host any of the copyrighted material in question, only linking to it. That November, ICE acted once again, this time seizing 82 domains. In December of 2011, over one year later, the agency returned one of the domains, Dajaz1.com, to its owner, after admitting that it had not in fact breached any laws.

In May of last year, the US Justice Department began seeking the extradition of one of the website’s operators, Richard O’Dwyer, from the UK. O’Dwyer is a British citizen who established TVShack.net in December of 2007. The DOJ is hoping to bring O’Dwyer to the US under the Extradition Act of 2003 to face charges of copyright infringement in the Southern District of New York.

Late last year, a number of nations signed a new global copyright agreement known as the Anti-Counterfeiting Trade Agreement or ACTA. Signatories include the United States, Canada, Japan, Australia, South Korea, and, as of this past week, 22 member states of the European Union.

Purported to be a treaty against counterfeit goods, generic drugs and copyright, it threatens to fundamentally alter the internet as it has so far existed.

When the Polish government announced its intention to sign earlier this month, protests sprang up around the country.

While the public is only beginning to understand the implications of ACTA, which has already been signed by a number of countries, others are pointing to these types of agreements as only the thin edge of the wedge for the implementation of outright totalitarian control over the internet as a whole. Indeed, perhaps even more worrying than the existing legislation and agreements for internet censorship are the numerous proposals for even more restrictive measures that have been made time and again by political leaders in a variety of contexts.

In October of 2008, the Labor government in Australia proposed a mandatory filter for the entire Australian internet. The proposal, dubbed “Clean Feed” would ostensibly block any content deemed to break Australia’s media regulations. When a list of the websites supposed to be banned under the scheme was released in early 2009, it included the websites of numerous innocuous Australian businesses, as well as overtly political websites that had no illegal or offending material. The current government has said they would not vote for any such legislation, and the proposal would be unlikely to reach parliament until 2013.

In 2010 the UK passed the Digital Economy Act, which theoretically allows for the UK government to ban copyright violators from the Internet. In August of 2011, parts of the legislation proposing the blocking of sites believed to be linking to copyrighted material was declared to be unenforceable and were dropped from the legislation.

In March of 2009, Senator Jay Rockefeller opined during a subcommittee hearing that the internet is proving to be such a threat to America’s national security that it would have been better if it had never existed.

In June of 2010, Senator Joe Lieberman stated that he believed the US needed the same ability to shut down the internet as China currently has.

While these proposals are sometimes couched in business-friendly rhetoric about protecting intellectual property, sometimes as a national security question about defending cyber infrastructure from foreign enemies and sometimes as attempts to protect children or stop the spread of child pornography, the proponents of internet censorship are becoming increasingly honest about their real worry: the free spread of ideas amongst a public that is allowed to choose for themselves what information to believe and what to discard.

Last year, Bill Clinton advocated the idea that the US government create an agency for “fact-checking” websites on the internet.

Earlier this month, Evgeny Morozov of Stanford, who previously served as a Fellow of George Soros’ Open Society Institute, wrote an article calling on Google and other search engines to use banners to warn users about websites that are deemed to be pseudoscientific or conspiratorial. Perhaps realizing that the proposal sounds drastic, Morozov concludes:

“such a move might trigger conspiracy theories of its own—e.g. is Google shilling for Big Pharma or for Al Gore?—but this is a risk worth taking as long as it can help thwart the growth of fringe movements.”

Here we see the real danger of the internet for those who seek to control the spread of information. The internet, like every other medium that has come before it, changes not just the way in which people create, distribute and receive information, but the information itself. Just as the printing press led to the widespread publication of the Bible in the vernacular and ultimately to the Reformation which forever transformed the power structure in European society, so too has the internet allowed the public to receive, correlate and distribute information that challenges official government narratives in a way that threatens to transform the power structure of our society. And as the traditional media has begun to bleed away the remains of its increasingly dissatisfied customer base, self-immolated on the fantastic failure to challenge the status quo on issues like Saddam’s WMD or the growing apparatus of the police state or the never-ending bailouts of the too-big-to-fails, a new, independent media has arisen to take its place, empowered by technologies that allow for the instantaneous and nearly costless transmission of ideas to the farthest corners of the globe.

When situated in this context, the recent struggle over the SOPA and PIPA bills are seen for what they are: one battle in a much larger war for internet freedom, and ultimately, the cognitive liberty of the American public. But it is possible to win the battle and yet lose the war, as the millions of MegaUpload users who just had all of their files seized by the FBI found out the hard way. The only hope is that the movement that has arisen to face this, the greatest threat to the rise of this new era of mental independence, does not wane in the wake of the SOPA and PIPA “victory,” but instead rises to meet the even greater internet clampdown that awaits. After all, all the authorities are waiting for is for the public to fall back asleep.