Sheila Newman will interview Jenny live 19 April between 12 midday and 1pm at 3RPP. You can listen live here. What next? Will they sell the people off as slaves? Will the remove access to our bank accounts overnight? Will they raise the cost of electricity so high that the companies take our houses to pay for them? Our Parliamentary system is beyond democratic control. Our economic system is a bad joke. Our taxes are used to pay for educational institutions which are then set up to profit private enterprise and investors and users overseas. And now, under Ted Baillieu, there is this proposal to sell Port Melbourne... (No, this is not an April fools joke.) 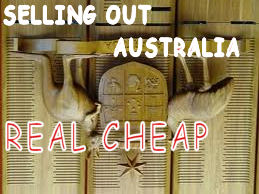 "It’s insulting that Spring Street might value the Port of Melbourne at only $2.4 billion (Baillieu flags state asset sales 23/3). Taxpayer shareholders recently spent around $1 billion on channel deepening and subsequent maintenance dredging to “prepare the Port for the future”. And, it’s a small fraction of the current estimate of $10 billion to develop the Port of Hastings – a project recently identified by government as urgently needed infrastructure. Taxpayers have invested in the Port of Melbourne for over a century and now we are expected to support its hand over to the private sector and then pay again to build Hastings port. It’s time to join the dots. Dumping the Port of Melbourne and developing Hastings is about catering for Baillieu’s pet projects for Gippsland: export of brown coal, woodchips and coal seam gas it he can find it. Topped up with Ports Minister Napthine’s proposed driverless trucks trundling up the Westernport Freeway from the Port of Hastings with assorted imports and we are approaching dystopia indeed."(Jenny Warfe, Blue Wedges) Sheila Newman will interview Jenny live on 19 April between 12 midday and 1pm at 3RPP. You can listen live here.

Sale Plan to pay for port

THE state government could sell the Port of Melbourne for $2.4 billion and four water authorities to fund five priority infrastructure projects including development of the Port of Hastings.

The other four projects are the east-west tunnel (linking the Western Ring Rd and the Eastern Freeway), rail links to Avalon airport, duplication of major freight highways, and a rail tunnel from Caulfield to Footscray.

The revelation of the go­vernment’s plans for possible asset sales has already drawn criticism from disparate sources including award-winning economics and public policy commentator Ken Davidson and environmentalists.

Mr Davidson wrote on Monday that it was “silly to prioritise the port at Hastings while Australia’s number one port at Melbourne has serious problems that inhibit Victoria’s development”.

Industry groups, including the Australian Peak Shippers Association, have warned the Port of Melbourne would face major bottlenecks from 2015 onwards as it reached capacity.

This has seen the government, led by Ports Minister Denis Napthine, to promise fast-tracking of Port of Hastings development (‘New port start five years away’, The News, 31/1/12).

In January Mr Napthine and Port of Hastings Development Authority board chairman Yehudi Blacher told The News Hastings was well suited to become Victoria’s second container port within 10 to 13 years.

“Container movements are estimated to quadruple over the next 30 years and it is critical that we begin planning for this growth now,” Mr Napthine said.

But Mr Davidson says development of Hastings could wait until 2035 when Melbourne’s population was expected to be five million.
Until then, the Port of Melbourne could be improved by redeveloping the Swanson/Dynon precinct, he said.

The pressure on Port of Melbourne has further increased following claims by government sources, port figures and shipping and automotive industry groups that the government is set to abandon its plan to move all automotive shipping from Melbourne to the Port of Geelong.

Port of Hastings has been touted as an alternative port for exporting and importing vehicles, especially with the closure of BlueScope’s hot strip mill, which saw the Iron Monarch bringing slab steel from Port Kembla weekly.

Ms Warfe said it was insulting the government valued the Port of Melbourne at only $2.4 billion.

“Taxpayers recently spent about $1 billion on channel deepening and subsequent maintenance dredging to ‘prepare the port for the future’, as port authorities claimed,” she said.

“The current estimate to develop the Port of Hastings – a project recently identified by the government as urgently needed infrastructure – is $10 billion.

“Taxpayers have invested in the Port of Melbourne for more than a century and now we are expected to support its hand over to the private sector and then pay again to build Hastings port?

“It’s time to join the dots. Dumping the Port of Melbourne and developing Hastings is about the premier wanting to export from Gippsland brown coal, woodchips and coal seam gas, if he can find it.

“With massive trains hauling this cargo through our green wedges to Hastings – and Ports Minister Denis Napthine’s proposed driverless trucks trundling up the Western Port Freeway from the Port of Hastings with assorted imports – we are approaching dystopia indeed.”

The government last month introduced laws forcing the Port of Melbourne Corporation to pay an annual $75 million ‘’licence fee’’ that would increase each year with inflation and generated about $1 billion over the next decade.

The fee cuts both ways as the Victorian Farmers Federation says it will add $10 million to the cost of exporting Victorian farm produce. It has dubbed the fee a “tax on trade”.

Melbourne has the last publicly owned major port on the eastern seaboard following the Queensland government’s sale of the Port of Brisbane for $2.1 billion and a NSW government plan to privatise Port Botany.