The current system of protection is failing Australian wildlife. Too little too late. Does legislation claiming to protect really cause habitat destruction? Current legislation let wildlife numbers fall too low, creating genetic bottlenecks that reduce long term chance of species survival. Even the largest national park is just a gene puddle, rather than a gene pool, if it is not connected to other habitat. 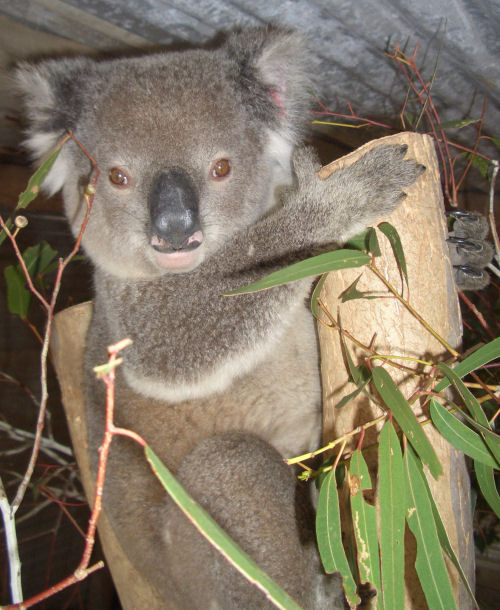 Photo of Koala Todd. James Fitzgerald looked after Todd for 3 months last year. Todd was found starving to the north of Cooma NSW, in open farmland without a gum tree in sight. A young dispersing male, he was looking for a new population to join but with so much habitat cleared he ended up lost in open grassland, underweight, dehydrated and starving. After Todd regained weight and was cleared by the Vet he was successfully released back into the wild on 30 November 2011.

Small step in the right direction

The federal government’s decision to list the koala as threatened in NSW and Queensland, is a small step in the right direction but unfortunately does not prevent logging in the koala forests of NSW or Queensland.

The Australian koala population prior to British settlement is estimated at having exceeded 10 million. A population of this size would reduce bushfire risk by providing over two million tonnes per year of hazard reduction eating of gum leaves. Gum leaves are the most explosively flammable part of the Australian bush. Too often little recognition is given to the positive services Australian wildlife would provide if normal population levels were re-established.

A significant factor in the fragmentation of the Australian koala population was the large-scale killing of koalas for their skins in the late 1800s and early 1900s. In Queensland in just one month August 1927, some 584,000 koala skins were sold.
Australia’s fragmented koala population could now be as low as 40,000 and declining.

It is a long-established scientific fact that fragmented populations of animals become genetically weaker over time. The genetic weakness then causes the fragmented populations to start to die out as they are no longer able to fight diseases or adapt to changes in their environment. The correct approach to save the koala is to restore habitat within a system of wildlife corridors to enable the koala gene pool to flow via the normal dispersal of young males.

There is a growing concern that the current system of protection is failing Australian wildlife. It is often too little too late. Some koala conservationists would go so far to claim that legislation aimed to protect actually enables the destruction of koala habitat.
In any case, current protections allow animal numbers to get down to low numbers, creating genetic bottlenecks that significantly reduce their long term survival prospects.

The NSW Wildlife Council believes that a benchmark based on pre-British settlement population estimates should be used to restore wildlife populations to at least 10 per cent of the estimate by re-establishing gene pools, habitat and wildlife corridors. Using pre-British estimates as a benchmark recognises the inter-relational connectivity of species. The current wildlife protection system does not provide for the many mutually beneficial relationships that exist in the natural world.

It is important to consider that even the largest national park is just a gene puddle if it is not connected to other habitat.

Wildlife rehabilitation groups know that male animals are over represented in road kill because of their need to disperse and find other populations. Prior to the large-scale killing of koalas for their skins the koala gene pool flowed up and down and across most of eastern Australia. For koalas to survive in the long term, the fragmented populations need habitat restored and most likely a supplementary breeding program guided by geneticists to reconnect the populations. The aim to rebuild the koala population to at least 10 per cent of pre-British estimates using this method is not unachievable. All it needs is community and political will.

Restore habitat and wildlife corridors to rebuild the koala population

As the koala population is rebuilt it would be necessary to re-establish animals like the Powerful Owl, as this predator would play its role in ensuring survival of the fittest by taking the occasional young koala from an unfit or inattentive koala mother. Other animals like the glider possum that help pollinate trees and is also a prey species for the Powerful Owl would need to be rebuilt so that the Powerful Owl didn’t focus all of its attention on the koala. It is these types inter-relational connections across species and the roles they play in the natural world that are not recognised in the current system of wildlife protection in Australia.

Wildlife corridors need to be defined and wildlife-friendly people and businesses encouraged to buy land along the corridors with conservation agreements and reduced rates. The bang for the buck is that wildlife corridors of re-established and connected habitat will benefit not just the koala but many other native plants and animals. It might be appropriate to reduce some of the native vegetation controls outside wildlife corridors. People would then have a choice based on their belief systems and or business needs as to where it would be best for them to live and or own land.

The 2007 United Nations Global Environmental Outlook 4 report (GEO-4), identified species collapse as a major environmental threat. We are now in the world’s sixth great extinction event. Current man-made extinction rates are 100 times higher than the base level in the fossil record.

Australia has the worst record for animal extinctions. The failure of the current protection system will end up with more animals endangered… not a functioning ecosystem. Fertility is a product of nature that is needed to replenish depleted soils that farmers and human food production ultimately depends.

Is the Australian public happy that since British settlement we have destroyed 99.5 per cent of Australia’s koala population? Most Australians have not seen a koala in the wild because of this destruction. It is now well overdue for Australia to rectify the wrongs of the past and rebuild a one million strong healthy connected koala population.