Have you ever seen the Great Pacific Garbage Patch? It encompasses a floating island of plastic debris out in the Pacific Ocean the size of Texas, about 60 to 90 feet thick, 1,000 miles off San Francisco. It kills millions of marine creatures and avian life in our oceans across the world annually. Over 46,000 pieces of plastic float on every square mile of Earth’s oceans.

Part 2: Does the rest of life on Earth matter? Not to humans. Impacts of destructive population momentum, why the silence on population? The great backtrack.

Have you ever seen the Great Pacific Garbage Patch? It encompasses a floating island of plastic debris out in the Pacific Ocean the size of Texas, about 60 to 90 feet thick, 1,000 miles off San Francisco. It kills millions of marine creatures and avian life in our oceans across the world annually. Over 46,000 pieces of plastic float on every square mile of Earth’s oceans. (Source: Whitty) Humans created it, but humans refuse to enact simple 10 cent deposit-return laws to stop it. Some estimates show humans tossing 2.5 million more plastic containers into the world’s oceans every hour. 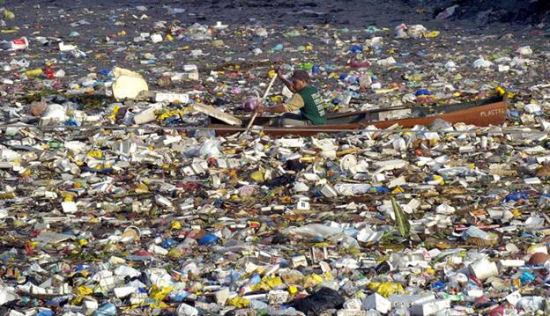 Such a gross contamination of the oceans continues unabated because humans refuse to clean up after themselves. It brings the question: does any of the other life on Earth matter to human beings?

In the end, do we even care about our own species as we explode our numbers across the planet? Even as 10 million children starve to death annually around the world, we gallop recklessly forward to adding 3.1 billion of ourselves within 38 years. (Source: World Health Organization)
Canadian Reid Westland said,


“There are some really unbelievable temperatures and fires in Australia with no let up in sight. Yet, no direct talk about global warming and no word on human numbers and behaviors contributing to it. We are going to have to be struck solidly between the eyes before any real concerted action is taken. Can you imagine the unrest when wheat hits $10.00 a bushel and corn holds a similar high, not to mention soybeans at $18.00 a bushel? Egypt is a hell hole now and they can't feed themselves. How are they going to buy food? On credit! If there is insufficient grain and credit dries up, they will consume what little is left of the "natural world". From 10 million elephants in 1900 to less than 470,000 in 2013, can you imagine as we eat and carve up the last of them for trinkets? We are at war with global warming and the enemy is us! We just refuse to face up to our actions and profligate numbers. We are at war with the natural world to keep our numbers growing! Wolves, grizzlies, mountain lions, deer, moose, elk and big horn sheep have lived in a dynamic state of equilibrium for eons. The great jungles and Serengeti's of the earth weren't denuded by any creature but man.” 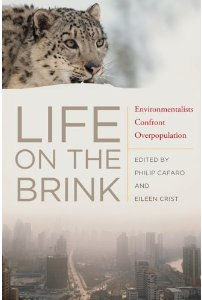 In Life on the Brink: Environmentalists Confront Overpopulation by Professor Philip Cafaro of Colorado State University and Professor Eileen Crist of Virginia Tech, we find the top authors and scientists in the world attempting to alert humanity to its impending future viability on this planet.

Apparently, we humans lack the common sense of a Canadian goose. We fail to act on our present realities of pollution, poisons, cancers, scarce water supplies and dwindling energy sources on our breakneck race to add another 1.1 billion of ourselves every 12 years.

“At this point, it’s almost certainly too late to manage a transition to sustainability on a global or national scale, even if the political will to attempt it existed, which it clearly does not. Our civilization is in the early stages of the same curve of decline and fall as so many others have followed before it. What likely lies in wait for us is a long, uneven decline into a new Dark Age from which, centuries from now, the civilizations of the future will gradually emerge.”

That quote does not warrant manifestation if we take action in 2013. It will certainly manifest if we fail to act.


“The explosion of humanity has decimated many animal and plant populations, extinguished species and sub-species, and caused collapsing ecologies and the shrinking and fragmentation of wild places. Ocean life has been reduced to food and by-catch; rainforests razed for meat and soybeans, boreal forests cut down for wood, mountains detonated for coals and natural gas and grasslands overgrazed and converted strictly into human breadbaskets while freshwaters are dammed, dumped into, overfished and channelized.”

All of these actions destroy animal habitat and reduce wildlife to penury on a scale that few understand or see. Both authors submit that humanity must change course and make radical changes in the human population equation.


“We have to make revolutionary changes in how we live on Earth—including limiting how many of us inhabit it.”

Less than 150 years ago, we humans counted a total of 1.5 billion of our numbers. Today, at 7.1 billion and adding 80 million net gain annually, 1 billion every 12 years—none of the other creatures on this planet stand a chance as we devour everything in sight—water, energy, land, food, resources and more.

This book will bring it home to you. It will prove one of the most important books of the 21st century. Let’s learn and let’s change course.

“We've poured our poisons into the world as though it were a bottomless pit…and we go on gobbling them up. It's hard to imagine how the world could survive another century of this abuse, but nobody's really doing anything about it. It's a problem our children will have to solve, or their children.” Daniel Quinn

At some point, the problem will become unsolvable and irreversible. Which means all life on Earth will suffer enormous consequences.

Part 3: Destructive momentum by Catton, Population growth by Bartlett, what we face if we fail to change

The author of this article, Frosty Wooldridge has bicycled across six continents - from the Arctic to the South Pole - as well as eight times across the USA, coast to coast and border to border. In 2005, he bicycled from the Arctic Circle, Norway to Athens, Greece. In 2012, he bicycled coast to coast across America. He presents "The Coming Population Crisis in America: and what you can do about it" to civic clubs, church groups, high schools and colleges. He speaks all over the United States on his latest book: How to Live a Life of Adventure: The Art of Exploring the World. Copies at 1 888 280 7715.

Human exposure to 1080 is very severely restricted by law, for obvious reasons. The same does not apply to other species in baited areas. The major animal welfare concern over the use of 1080 relates to its extreme cruelty and its lack of an antidote. The major environmental concern relates to its effects on non target animals, either through ingestion of baits or by secondary poisoning.

1080, sodium fluoracetate, is all bad news

1080, sodium fluoracetate- for which there is no antidote, is cheap and easy to use, but a cruel solution. 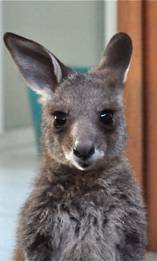 “The wallaby does not know the carrots will poison and kill her...they are laced with 1080; she will die and her joey will starve! There is no antidote to the progressively slow and agonising death...as her functions fail...” Photo: Brett Clifton “When ingested, wallabies, possums, wedge-tailed eagles that feed on smaller prey are progressively debilitated and die a slow, agonizing death as its systems fail. Death may ultimately result from a variety of causes ranging from heart failure to suffocation. There is no antidote to 1080 poisoning”.

For these reasons, human exposure to 1080 is very severely restricted by law. The same does not apply to other species in baited areas. The major animal welfare concern over the use of 1080 relates to its extreme cruelty and its lack of an antidote. The major environmental concern relates to its effects on non target animals, either through ingestion of baits or by secondary poisoning... the toxic chemical that slowly kills.

Secondary poisoning occurs when animals, such as birds of prey, eat poisoned mammals. Falcons and eagles are a case in point. Many of these animals are increasingly rare:

"Australia and its territories host 35 species of birds of prey: 24 diurnal raptors and 11 owls, many of which are endemic. Nine species and as many subspecies are listed as threatened nationally and/or regionally....

As predators at the top of food chains they are vulnerable to secondary poisoning and the accumulation of persistent pesticides, and subject to persecution." Source: http://www.birdlife.org.au/documents/OTHPUB-Raptors.pdf

Pets and domestic animals victims of 1080

Dogs and even horses are at serious risk. Here is a case in New Zealand: 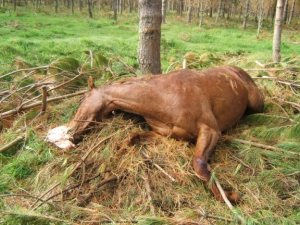 "The land treated could easily have been treated for possum control by safer alternative methods, ie. trapping and ferratox in bait stations, as it is NOT REMOTE, NOT INNACCESSIBLE, and NOT RUGGED TERRAIN.

It is obvious from the position of the animal, the damage to its leg, the vomited lungs and the distended veins, that this animal died a horrible and cruel death. Deer have been observed to have tried to rip open their own bellies in their agony, and have inflicted similar and worse damage to their bodies while under the effects of 1080. Dogs are driven insane by the excruciating pain inflicted upon them before succombing to a cruel death. Poisoned possums can travel several kms and may take up to 18 hours to die." Source: http://emigratetonewzealand.wordpress.com/2008/09/05/1080-3/

Dingos are a better idea than 1080

The alternative idea of supporting the return of terrestrial predators adapted to Australian conditions has recently been the subject of serious discussion, most recently and fascinatingly in this article by scientists, Corey Bradshaw and Euan Ritchie: "Can Australia afford the dingo fence?" The authors write:

"...Why do we invest billions of dollars in feral animal control and the subsequent recovery plans for endangered wildlife using the same techniques for decades, when a more proactive and natural alternative exists? It’s a solution mired in controversy because it involves yet another “introduced” predator – the dingo.

...And poisoning is not the answer either. In addition to killing non-target native species, baiting dingoes might in fact result in increased dingo densities due to social breakdown of the pack, resulting in increasing attacks on stock, not to mention a higher likelihood of hybridisation with feral dogs. Baiting also leads to more juvenile dingoes."