Geoff at Aussiebushtreks writes, "This is very urgent. Please watch Corine Fisher's video. [Inside article]" Then Email upper house pollies without delay. There is still a chance to stop O`Farrells dreadful destructive Planning Law. If you go to http://betterplanningnetwork.good.do/nsw/email-upper-house-mps/ your email will automatically go to Upper House Parliamentarians. Don't dilly dally!

The film tells about the Better Planning Network, which has 115 groups involved, with their numbers rising.

Unlike in the Lower House of Parliament, the NSW Government does not have the majority in the Upper House. Therefore, to ensure that its Planning Bills get through the Upper House, the Government needs the vote of either: Labor; and/or the Greens; and/or the Christian Democrats and the Shooters and Fishers.

The Upper House debate of the Planning Bills could occur as soon as 12 November. It is therefore vital to email Upper House MPs NOW and voice your concerns about the Government's Disgraceful, corrupt and Destructive Planning Bills.

Please write an email in your own words. Some key points you may wish to make are:

The Government's Planning Bills go against its election promise to return planning powers to the local community.
The Government's Planning Bills will not deliver certainty or transparency for communities.
The principle of Ecologically Sustainable Development must be the overarching driver of the legislation.
The ease with which developers will be able to override local councils' planning controls to get their rezoning requests approved by the State, by the issuing of Strategic Compatibility Certificates (a green light to a spot rezoning) goes against the very concept of strategic planning. These provisions must be removed from the Bill.
The restriction of code-assessable development to 'nominated growth areas' will create 2 classes of residents: the first, in low-density suburbs, will have the right to comment on most developments in their neighbourhood; the second, in growth areas, will not.
The Government's Planning Bills do not provide any simpler or more user-friendly a system that the one we already have.
There is no evidence that the Government's Planning Bills will improve housing affordability simply by increasing housing supply. This is because the drivers of housing affordability are complex and include tax (eg. negative gearing) and welfare policies which the Planning Bills will not address.[1]
No amount of tweaking can fix the Bills and it's best to scrap the Bills and work with all stakeholders to draft new legislation.

[1] Candobetter Ed.: Less complex but poorly known by the general public is that State governments in Australia drive population growth upward to benefit developers. They do this by encouraging business immigration and family reunion via State websites inviting immigrants. Australia's federal government is in charge of setting a ceiling on total immigration but, since 2009, Australia's population growth has come 60 per cent from extremely high mass immigration. We are talking hundreds of thousands here. See http://candobetter.net/?q=taxonomy/term/5149

Park Rangers in NSW Public Service Association will take industrial action to show their lack of confidence in NSW Premier's backroom deal with shooters party to give them hunting access in our National Parks. This seems the right thing to do. The current government attitude to New South Wales's beautiful parks and indigenous animals seems unAustralian and somehow blasphemous, for these are our icons and Mother Nature's home. This foreshadowed desecration of our national parks is linked to deals to privatise NSW electricity. See also "Barry O'Farrell, NSW electricity privatisation and shooting in National Parks Australia"

The NSW Public Service Association, which represents park rangers, has directed its members not to assist with any activity involved with establishing recreational hunting in national parks in NSW.

Members will also be asked to withhold information and their expert advice from Minister for the Environment Robyn Parker and other members of the NSW Coalition Government. 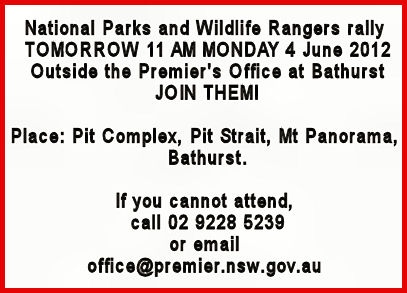 “Opening the gate for recreational hunting in 79 national parks and other conservation areas in NSW poses a serious risk to the safety of park rangers, visitors, wildlife and the environment.

“Our park rangers should not have to work in fear for their own safety. Our members have expressed serious concerns about the danger to themselves and the community when shooting is allowed in bushland popular with walkers and picnickers.

“Our members have been working very hard to control and manage feral animals in parks. Recreational shooting will compromise the professional and scientifically proven feral animal control programs run by national parks staff, placing native plants and animals at risk.

“This move is another shot across the bow of our national parks, with the Shooters and other vested interest groups clamouring for greater access at the expense of the environment and the people who look after them.

“Industrial action like this is not a decision we take lightly but we simply cannot let the State Government’s compromise of our National Parks to go ahead,” Mr Cahill said.

For decades now state governments have been withdrawing support from Australia's national and regional parks. These rangers' numbers have been whittled down. They have been forced to submit to arcane bean-counting exercises and to focus on attracting tourists rather than protecting and studying the wildlife and vegetation in these wild spaces. They risk their livelihoods by expressing these educated views in a system that simply does not play fair with rank and file workers, especially when they are isolated from each other. Natural science has so much to enrich our society but it is a victim of corrupt political processes in our society where land-use is increasingly dominated by a growth lobby that knows the price of everything but the value of nothing, and has no respect for democracy.

Electricity privatisation continues to cause bizarre consequences as yet another State Premier will apparently do anything to push it through, despite almost total lack of electoral support. See our history of attempts to privatise electricity in NSW. It reads like a war on democracy. Now that war is against the State's wildlife. During his first week in government, the NSW Premier, Barry O`Farrell, made a strong promise to environment groups and the people of NSW that he would not allow shooting in National Parks. Now he has done a deal with the Shooters and Fishers Party so that they will support his electricity privatisation bill. Shame on Barry, Shame on the Shooters and Fishers who many see as just another front for the Libs in NSW, posing as another party.

The Premier of NSW has today broken a pre-election promise to keep recreational shooting out of our National Parks. He has announced that the government will be opening up 34 National Parks, 31 Nature Reserves and 14 State Conservation Areas across the state to recreational hunters.

During his first week in government, the Premier made a strong promise to environment groups and the people of NSW that he would not allow shooting in National Parks. Now he has done a deal with the Shooters and Fishers Party so that they will support his electricity privatisation bill.

National Parks are for the protection of nature and for the enjoyment of the NSW public, not for blood sport. This decision by the government shows complete disregard for public safety and for the purpose of our National Park system.

The government is ‘greenwashing’ this deal as a way of managing feral animals, but control of feral animals is best achieved by professionals, not by sporting hunters.

If you are as horrified about this as we are, please take a few quick actions:

1) Give your local member a call today and tell them how you feel about this appalling decision. You can follow this link to look up your local MP's contact details.

2) Visit the SMH website and vote in their poll against shooting in national parks. (Poll closes at midnight 31 May.)

3) If you have time, please write a letter to editor (either of your local paper or one of the State-wide papers), and/or make a call to talkback radio about this issue.

The National Parks Association of New South Wales (NPA) has a number of key concerns about this decision:

1) The purpose of National Parks is to protect the environment and allow the quiet enjoyment of nature, not for blood sports.

2) This decision poses a huge risk to the safety of the public, who just want to bushwalk, have a picnic or enjoy nature with their families.

3) Control of feral animals should be left to the professionals. Recreational hunting is not an efficient or cost-effective tool for feral animal control in National Parks, and may have serious impacts on our native wildlife.

4) This is a major betrayal of the public by the Premier, who has consistently promised that there will be no recreational hunting in National Parks. It is completely unacceptable for our protected areas to be used as a pawn in a political trade-off.

See below for a list of parks that the government proposes to open up for shooting.

The website of the Invasive Species Council has more information about why so called 'conservation hunting' by amateur hunters is not an effective means of controlling feral animals.


"The NSW and Victorian governments have been funding recreational hunting and opening access to public lands on the basis that hunters can control feral animals.

But evidence (including the failure of numerous bounties) shows that, at best, hunters can supplement more effective methods of feral animal control or provide control in small, accessible areas.

Funding recreational hunting as a primary method of control is a waste of taxpayers’ money. There is also the risk that opening up public lands to hunting creates an incentive for maverick hunters to shift feral animals into new areas – as has occurred particularly with pigs and deer.

The Invasive Species Council has been working with other environment groups to oppose the NSW Shooters Party legislation to expand hunting into national parks, allow private hunting reserves, and permit the release of exotic birds rated as a serious or extreme pest threat by Australian governments."

The government is proposing to immediately consider opening the following National Parks, Nature Reserves and State Conservation Areas up for shooting.