With her 1962 book, Silent Spring, Rachel Carson got DDT and other synthetic pesticides banned and saved bird life. Today it is humans who are directly threatened by technologies designed to extract the maximum profit at the lowest private cost and the maximum social cost from natural resources. Once abundant clean water has become a scarce resource. Yet, in the US ground water and surface water are being polluted and made unusable by mountain top removal mining, fracking and other such "new technologies. Ranchers in eastern Montana, for example, are being forced out of ranching by polluted water. 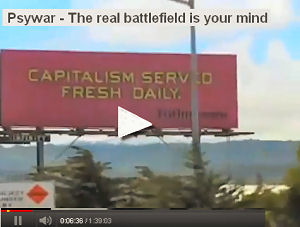 Nuclear power plants are thoughtlessly built in earthquake and tsunami zones. Spent fuel rods are stored within the plants, a practice that adds their destructive potential to a catastrophic accident or act of nature.

The newest threat comes from genetically modified seeds that produce crops resistant to herbicides. The active ingredient in Monsanto's Roundup herbicide is glyphosate, a toxic element that now contaminates groundwater in Spain and according to the US Geological Survey is now "commonly found in rain and streams in the Mississippi River Basin.

In 2011 Don Huber, a plant pathologist and soil microbiologist, wrote to the US Secretary of Agriculture about the unexpected consequences of GMOs and the accompanying herbicides. He cited adverse effects on critical micronutrients, soil fertility, and the nutritional value of foods. He cited the impairment of metabolic pathways that prevents plants from accumulating and storing minerals, such as iron, manganese, and zinc, minerals important for liver function and immune response in animals and people. He cited toxic effects on the microorganisms in the soil that have disrupted nature's balance and resulted in large increases in plant diseases. He cited livestock deaths from botulism, premature animal aging, and an increase in animal and human infertility.

In an interview, Huber said that the power of agri-business has made it almost impossible to do research on GMOs and that regulatory agencies with the responsibility of protecting the public are dependent on the industry's own self-serving studies and have no independent objective science on which to base a regulatory decision.

In short, in order to secure bumper crops for several years, we are destroying the fertility of soil, animal and human life.

Mankind has been destroying the world for a long time. In his fascinating book, 1493, Charles C. Mann describes the adverse effects on the environment, people, and civilizations of the globalism unleashed by Christopher Columbus. These include the international transfer of human and plant diseases, deforestation, destructions of peoples and empires, and the impact on distant China of Spanish new world silver.

Mann provides a history lesson in unintended and unexpected consequences resulting from the actions of elites and of those that elites dominated. The Chinese government fixed taxation in terms of the quantity of silver, but the importation of Spanish silver inflated prices (decreased the value of a given quantity of silver) and left the government without sufficient revenues.

A successor government or dynasty evicted Chinese from the coast in order to deprive pirates of resources. The displaced millions of people deforested mountainsides in order to sustain themselves with terrace agriculture. The result of deforestation was floods that not only washed away the terraces but also the crops in the fertile valleys below. Consequently, floods became one of China's greatest challenges to its food supply.

Mann points out that the lowly mosquito had a large impact on American history. The Mason-Dixon Line roughly splits the East Coast into two zones, the South in which disease carrying mosquitoes were an endemic threat, and the north in which malaria was not a threat. In the South, a person who survived childhood and grew into an adult had acquired immunity. Northerners had no such protection.

This had enormous consequences when Northern armies invaded the South. Mann reports that "disease killed twice as many Union troops as Confederate bullets or shells. Between the summers of 1863 and 1864, the official annual infection rate for what was called "intermittent fevers was 233 percent. The average northern soldier was felled more than twice. In one year 361,968 troops were infected. Most of the deaths from malaria were indirect. The disease so badly weakened the troops that they died from dysentery, measles or strep infection.

The mosquito was the South's most powerful ally and so prolonged the war, despite the vast numerical superiority of the Union force, that Lincoln was forced to take action that he opposed and declare emancipation of slaves. Thus, Mann writes, it is not farfetched to conclude that blacks were freed by the very malaria mosquito that had caused blacks to be the preferred workforce.

Mann shows that long before the birth of capitalism, greed drove men to barbarous treatment of their fellows. He also shows that policies, whether driven by greed or by well-intended socio-political design, inevitably had unexpected consequences. His multi-faceted history well illustrates the old adage, "the well laid plans of mice and men often go awry.

The old world's colonization of the new world devastated new world peoples, but the new world bit back with the spread of the potato blight to Europe and Spanish and European inflation.

Environmental destruction resulted mainly from deforestation and soils washed away by consequent floods. Prior to modern technology and toxic chemicals, the planet survived mankind.

Today the prospects for the planet are different. The human population is vast compared to earlier times, putting far more pressure on resources, and the disastrous consequences of new technologies are unknown at the time that they are employed, when the focus is on the expected benefits. Moreover, these costs are external to the business, corporation, or economic unit. The costs are inflicted on the environment and on other humans and other animal life. The costs are not included when the business calculates its profit and return on its investment. The external costs of fracking, mountain top removal mining, chemical farming, and GMOs could exceed the value of the marketable products.

Businesses have no incentive to take these costs into account, because to do so reduces their profits and could indicate that the full cost of production exceeds the value of the output. Governments have proven to be largely ineffective in controlling external costs, because of the ability of private interests to influence the decisions of government. Even if one country were to confront these costs, other countries would take advantage of the situation. Companies that externalize some of their costs can undersell companies that internalize all of the costs of their production. Thus, the planet can be destroyed by the short-term profit and convenience interests of one generation.

The main lesson that emerges from Mann's highly readable book is that people today have no better grasp of the consequences of their actions than superstitious and unscientific people centuries ago. Modern technological man is just as easily bamboozled by propaganda as ancient man was by superstition and ignorance.

If you doubt that the peoples of Western civilization live in an artificial reality created by propaganda, watch the documentary on psyops at 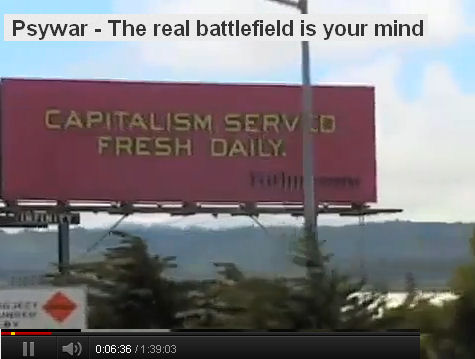 http : / / www . youtube.com/watch?v=lZiAV6fU2NM&feature=player_embedded#! The documentary does a good job despite wandering off into a couple of side issues on which it takes one-sided positions. It is a bit heavy on blaming the rich, and overlooks that Stalin, for example, had plenty of propaganda and wasn't looking to make himself a billionaire. Not all the rich are against the people. Billionaires Roger Milliken and Sir James Goldsmith fought against jobs offshoring and globalism, which increases the powerlessness of the people vis-a-vis the elites. Both spoke for the people to no avail.

US Propaganda and Terrorism laws

The documentary also blames the Constitution for limiting the participation of the mass of the people in governing themselves without acknowledging that the Constitution restricted the power of government and guaranteed civil liberty by making law a shield of the people instead of a weapon in the hands of the government. It is not the Constitution's fault, or the fault of Founding Father James Madison, that the American people succumbed to propaganda by Bush and Obama and gave up their civil liberty in order to be "safe from "Muslim terrorists."

The documentary shows that propaganda is a form of mind control, and controlled minds are indeed the American predicament.

In 1962 Rachel Carson caught Monsanto off guard and thus gained an audience. Today she would not get the same attention. Ready and waiting psyops would go into operation to discredit her. I just read an article by an economist who wrote that economists have decided that environmentalism is a religion, in other words, an unscientific belief system that preaches "religious values. This demonstrates what little importance economists attribute to external costs and the ability of externalized costs to destroy the productive power of the planet. Thus, the question, "silent spring for us? is not merely rhetorical. It is real.

Dr. Roberts' latest book is Economies in Collapse: The Failure of Globalism, published in Europe, June, 2012.