It is great to see two politically engaged women speak out about Syria. On the one hand we have Syrian Girl Partisan, who has reported in around 20 home-made films. Now a Catholic nun based in Syria has stood up and denounced Western reporting on events there. What she and others seek in Syria is “reform, no violence, no foreign intervention.” She hopes for “a new, third way, a new social pact where the right to autodetermination without outside interference” would be respected.

This article with the video is republished from Global research TV 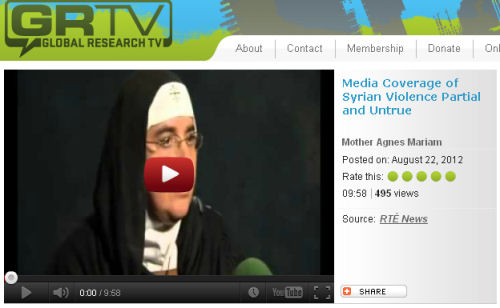 Media Coverage of Syrian Violence Partial and Untrue
by grtv

As posted on theIrish Times by Patsy McGarry:

A NUN who has been superior at a Syrian monastery for the past 18 years has warned that media coverage of ongoing violence in that country has been “partial and untrue”. It is “a fake”, Mother Agnes Mariam said, which “hides atrocities committed in the name of liberty and democracy”.

Superior of the Melkite Greek Catholic monastery of St James the Mutilated in Qara, in Syria’s diocese of Homs, which is in full communion with Rome, she left Ireland yesterday after a three-day visit during which she met representatives of the Irish Catholic Bishops’ Conference in Maynooth.

She told The Irish Times she was in Ireland “not to advocate for the (Assad) regime but for the facts”. Most news reports from Syria were “forged, with only one side emphasised”, she said. This also applied to the UN, whose reports were “one-sided and not worthy of that organisation”.

UN observers in Syria had been “moderate with the rebels and covered for them in taking back positions after the withdrawal of heavy equipment, as seen so tragically in Homs”, she said.

When it was put to her this suggested the whole world was out of step except for Syria, Russia and China, she protested: “No, no, there are 20 countries, including some in Latin America” of the same view.

The reason the media was being denied easy access to Syria currently was because in the Libyan conflict journalists placed electronic devices for Nato in rooms used at press conferences in that country, she said. “So Syria didn’t want journalists,” she said.

Christians make up about 10 per cent of Syria’s population, dispersed throughout the country, she said. The Assad regime “does not favour Christians”, she said. “It is a secular regime based on equality for all, even though in the constitution it says the Koran is the source of legislation.”

But “Christians are less put aside [in Syria] than in other Islamic countries, for example Saudi Arabia,” she said. “The social fabric of Syria is very diverse, so Christians live in peace.”

The “Arab insurrection” under way in that country included “sectarian factions which promote fundamentalist Islam, which is not genuine Islam”, she said.

The majority of Muslims in Syria are moderate and open to other cultural and interfaith elements, she said. “Wahhabism (a fundamentalist branch of Islam) is not open,” she added.

Christians in Syria were “doubtful about the future if the project to topple the regime succeeded”. The alternative was “a religious sectarian state where all minorities would feel threatened and discriminated against”, she said.

There was “a need to end the violence”, she said. “The West and Gulf states must not give finance to armed insurrectionists who are sectarian terrorists, most of whom are from al-Qaeda, according to a report presented to the German parliament,” she said.

“We don’t want to be invaded, as in Aleppo, by mercenaries, some of whom think they are fighting Israel. They bring terror, destruction, fear and nobody protects the civilians,” she said. There were “very few Syrians among the rebels”, she said. “Mercenaries should go home,” she said.

What she and others sought in Syria was “reform, no violence, no foreign intervention.” She hoped for “a new, third way, a new social pact where the right to autodetermination without outside interference” would be respected. (Source: Irish Times)