Tim Murray opines on free lunches, Canada as an international flophouse, the Republican manufacture and marketing of moral hallucinogens, and the notion of manifest destiny in the light of the laws of thermodynamics [you can't have your cake and eat it], as he listens to the US GOP (Republican) Convention. 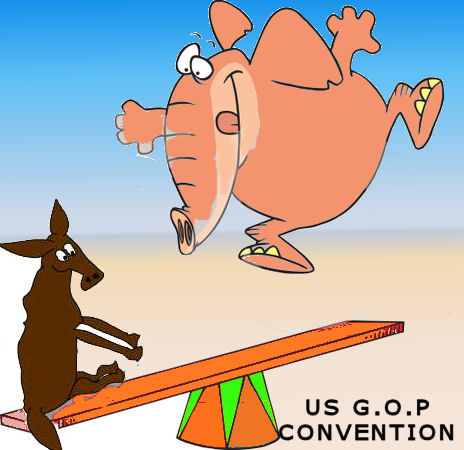 It was a miracle!I Heard the speeches but didn't vomit

Having had to abandon email traffic this week to meet the demands of a pressing home reno project, I nevertheless could not resist pausing between hammer blows to listen to the live coverage of the GOP convention. I heard the speeches of Rand Paul, Paul Ryan, Rubio and Romney, and managed, somehow, to avoid ejecting my stomach contents in the process.

Don't get me wrong. I am not a "liberal", or a Keynesian, or a socialist. In fact, I guess you might even call me a radical small c "conservative". It took me four decades to get there, having been dragged by reality kicking and screaming but alas, I reluctantly realized that Milton was right after all--- there is no free lunch. You don't need to go to Greece or Spain to realize that---just look at our much vaunted Canadian 'socialized' medical system and you'll get the picture. Like I always say, Canadian Medicare consists of "free" and universal access to a six month waiting list. And the more money we throw at it, the longer the wait lists seem to get. I truly hope that one day Michael Moore finds himself on a Canadian surgery list awaiting hip replacement. If he comes up here, he should be advised to keep to the right side of the road however. Otherwise he will be run over by the 46,000 Canadians who travel south each year to get timely medical treatment in the United States. Who knows, maybe Canadian money will keep Obamacare from Code Blue for a while. Like maybe another day or two.

I believe that government is at best a blunt and clumsy instrument, that the small business sector is the engine of job creation, and the crony capitalism of Obama--- and let's face it--- of most governments in the world, is corrupt, colossally wasteful and dangerous. So I admit, a lot of the rhetoric I heard from that convention struck a chord with me---until I realized that it was rooted in bullshit.

The statement that best encapsulated the nonsense spouted in Tampa Bay was made by VP nominee Ryan. Something to the effect that while the Democrats wanted to grow the government, the Republicans wanted to grow the economy. The truth is, both have habitually grown the size of government, and both habitually will try to grow the economy. Trouble is, continuing economic growth is physically impossible. Except in their world. According to Rice and Romney, "we", that is Americans, can achieve "North American energy self-sufficiency". How interesting that American politicians don't even bother to grant Canada the courtesy of a mention. They are no Canadian resources anymore, they’re North American resources. Americans assume that Canada is just a goblet to be drained. The worst part of it is that they’re right.

Canada as a flophouse

I am actually thinking of trying to find the text of the four speeches I heard and mine them for quotable quotes and one-liners that scored a hit with the crowd. I think they pretty well sum up North American mythology. I say "North American" because most of things these politicians said about the "American dream" could be said with equivalent truth about "the Canadian dream". In Canada, we also measure our worth in terms of how many people the world over would kill to live here. It flatters us. It is if, as a slum landlord, the mere fact that there are so many destitute people who want to rent my cockroach-infested tenement is proof that well, my shit-hole is not so bad after all, and I am not that bad of a landlord either. Another way of putting is that because we have not yet finished the task of blanketing the landscape with strip malls, highways and suburbs and consuming all of our low-hanging fruit, this is still a great place to live because, relative to the rest of the world, it is. Since everyone else on UN Street has overbooked their hotel by a factor of a hundred, then ours is relatively vacant since we are only overbooked by a factor of 10. Or so goes the logic.

I think Republican strategists have really honed in on our weaknesses. Paul, Ryan, Rubio, Romney--and so I hear---Rice, all used a formula that is a proven hallucinogen. Their speeches were like a date-rape drug slipped into our drinks while we were looking the other way. It sure made me whoozy at times---those "right wing" shibboleths really do it for me---especially when they talk about getting tough with Iran. Seriously . Even Clint Eastwood's pathetic performance sent chills up my spine. He made my day. As far as I could discern, the major ingredients to the Republican elixir went something like this: 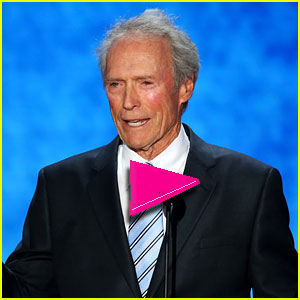 1. Exploit our love for the human interest story. Forget analysis, talk about the people in your life. Talk about your Mom, or your parents, or your wife, or the Cambodian family in your neighbourhood that works all night to make donuts to go with your morning coffee. And of course, all of their kids are now in medical school.
2. Use the "immigrant-makes-good" story as a backdrop to illustrate how you began from humble beginnings, and why America is an exceptional country full of exceptional people whose dreams were realized through the legacy they left children because only in America are you judged by what you do, and not by who you are or where you came from. If your inspiring portrait of America does not suffice to impress, then run down somebody else's country. Especially the one that your parents, or grandparents or neighbours ran away from. How brave it was for Rubio to stand at podium in Florida and talk about the absence of freedom in Castro's Cuba. He is dead right of course, but then, I suspect that freedom of enterprise was the freedom that concerned him most. Batista's Cuba was not a haven of democracy either.
3. Make the humble owner of a small business the iconic hero of American society. The government didn't get up at 5 am to open the doors to my mom's shop. The government didn't work 12 hour days to keep her business alive. The government didn't take on the risks she incurred and worry about how she was going to meet her payroll. The government didn't build her business---SHE did!
4. And after you tell the audience ---over and over and over again----that "we"---that is the real Americans, the industrious, enterprising businessmen and women--- BUILT that---you end your speech by saying that Americans owe everything to the Lord Whose Light Shines In All Of Us. In other words, GOD BUILT THAT!

And that, perhaps, in a sense, is where Republican sloganeering inadvertently bumped into reality. For if you are a deist, then presumably, you believe that it was God who provided the exceptional bounty of natural non-renewable resources that our parents or grandparents--- or in my case--- great grandparents, stumbled upon.

So we really aren't the "exceptional" people after all. We're the goddamn LUCKY people--- as Catton and Clugston have tried to tell us.

Somehow, though, I think our luck has peaked, don’t you?

[1] GOP stands for "Grand Old Party", the ancient nickname given to the Republicans, the party of Abraham Lincoln, the party that freed the slaves, etc.