Queensland clearing laws could kill over 400 million native animalsl The Commonwealth must act to stop the destruction.

More about the upcoming 2013 environmental exhibition containing this painting, at end of this article under "Notes".

“With the passage of legislation through the Queensland Parliament this week allowing farmers to clear potentially large areas of threatened wildlife habitats and graze cattle in National Parks, and news confirming that an incoming Coalition Government would devolve the Commonwealth’s national environment powers to the states and territories, a national environmental disaster is looming.”


“Under the amendments to Queensland’s Vegetation Management Act, approximately 2,000,000 hectares (5,000,000 acres) of wildlife habitats are at-risk of clearing*. Extrapolating from a scientific report** on the numbers of animals killed during land clearing operations in Queensland during the late 90s, it can be estimated that if all land clearing options were taken up by Queensland farmers, in the region of 455 million native animals could be killed as a result. And even if only a quarter of this land total was cleared, we are still talking about killing over 100 million animals.”

The Commonwealth’s Environment Protection & Biodiversity Conservation Act (EPBC Act) also protects 14 threatened ecological communities.*** in Queensland, highly endangered habitats that require the Federal Environment Minister’s permission before any development can occur that may significantly affect them. It is estimated* that 169,000 hectares of mature bushland and 366,000 hectares of important regrowth habitats of these threatened ecological communities are now at risk from clearing, presenting Minister Burke with clear reasons for intervening in Queensland.

Cattle grazing is also highly destructive on the natural environment, spreading weeds, significantly damaging waterways and having the potential to destroy critical habitats and native ground-dwelling species. Giving a few private individuals access to a highly valuable public asset, due to their continuing incompetence, is a public policy travesty. Calls by the RSPCA in Queensland to allow cattle to graze in National Parks are chronically misguided, and do not address the root cause of the plight of the animals – greed and prolonged environmental and livestock mismanagement.

***HSI prepared scientific listing proposals for 8 of these threatened communities

Re image, "Apocalypse". From the original site at http://www.cantonart.org/20"This touring art exhibition confronts environmental issues facing human, plant and wildlife species in our time, from land development to natural resource depletion, and seeks to heighten public awareness through the power of art. The show is curated by Dr. David J. Wagner, author of the reference book, American Wildlife Art, and curator/tour director of an impressive list of exhibitions including The Art of Robert Bateman, The Sea of Cortez, and Endangered Species: Flora and Fauna in Peril which toured to the U.S. Department of Interior in Washington, D.C. The exhibition features iconic works such Still Not Listening, a poem and sculpture of the same title by Leo Osborne, an elegy to victims of the Exxon Valdez oil spill in Alaska. (Image: Apocalypse, Walter Ferguson)"

David Attenborough and other renowned conservation figures have urged PM Gillard to retain National Environment Powers. At the moment changes devolving major decision making to our growth-mad developer states are imminent. The writers of a letter to the Primeminister say that their concern arises particularly due to Australia being "one of a very few biologically mega-diverse developed countries on the face of this Earth. The array of natural ecosystems and their component species is simply breathtaking, making Australia one of the most important and exciting places in the world for the long-term conservation of biological diversity." See also this article which contains links to petitions etc. 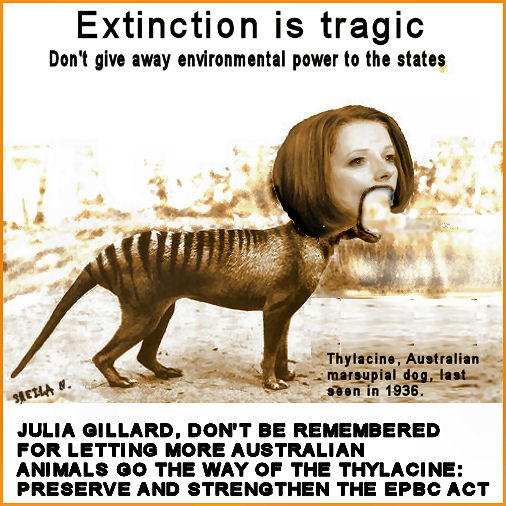 Today, 23 November, 2012, 33 United Nations Environment Program Global 500 Laureates (elected to the UNEP Global 500 Roll of Honour in recognition of outstanding practical achievement in the protection of the environment) delivered Prime Minister Gillard a letter urging her not to abandon national environmental protection and devolve powers to state and territory Governments.

Among the signatories are Sir David Attenborough and five of the world’s most influential conservation biologists: Drs Paul and Anne Ehrlich from Stanford University, Dr Peter Raven, President Emeritus of the Missouri Botanical Gardens, Professor Tom Lovejoy from George Mason University in Washington DC, and Professor Norman Myers from Green College, Oxford University. These are the men and women - the pioneer whistle blowers, who told of the massive loss of species and habitats facing the planet, and of the threat of climate change - going back nearly 40 years.

In their letter the Global 500 Laureates state: “We have been concerned to hear however that there are proposals in train to weaken the EPBC Act and to allow the states and territories to approve developments affecting Matters of National Environment Significance without any Commonwealth oversight. We believe this would be a retrograde step in relation to the development of environmental law in Australia, with significant and negative implications for the conservation of biological diversity and achieving ecologically sustainable development”.

The letter, organised by Humane Society International (HSI) Director and Global 500 Laureate, Verna Simpson, has been presented to the Prime Minister just weeks before the Council of Australian Governments (COAG) meets in early December, to discuss the ongoing administrative process for handing over Commonwealth environmental powers, which has a March 2013 deadline. The Government appears not to be listening to Australia’s professional environmental community, but this letter clearly indicates the global concern for the potential deterioration of effective national environmental regulation in Australia.

The Global 500 Laureates concluded: “The individual and organisational UNEP Global 500 Laureates below would like to offer our support for a continuation of your Government’s efforts to develop best possible policies and practices for the conservation of biological diversity through the maintenance of the current powers contained within the EPBC Act, and to avoid, at all costs, the devolution of such powers”.

See also this article which contains links to petitions etc.

This article was based on a press release from the Humane Society International (HSI).
HSI concentrates on the preservation of endangered animals and ecosystems and works to ensure quality of life for all animals, both domestic and wild. HSI is the largest animal protection not-for-profit organisation in the world, with over 10 million supporters globally and has been established in Australia since 1994.