For over 200 years Tasmanian wildlife were spared the devastating presence of foxes. A few years ago foxes made it onto the island. Now the effort to stop the irreversible spread of foxes in Tasmania is at a critical stage with many native species at risk of extinction, according to research in the British Ecological Society’s Journal of Applied Ecology. 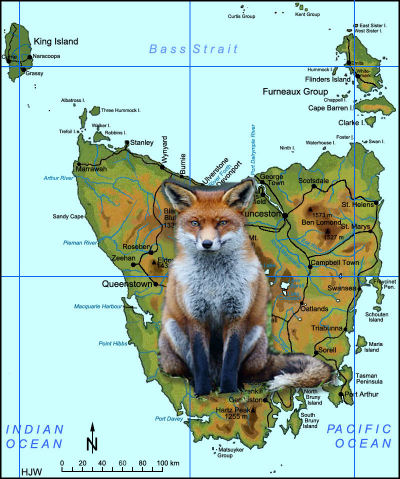 Using DNA detection techniques, University of Canberra ecologists and collaborators mapped the presence of foxes in Tasmania, predicted their spread and developed a model of their likely distribution as a blueprint for fox eradication. The results suggested that swift and decisive action is needed.

Team leader, Stephen Sarre, University of Canberra professor in wildlife genetics, found that foxes are widespread in northern and eastern Tasmania and the model developed by his team forecasts they will spread even further with likely devastating consequences for the island’s wildlife.

‘If we allow them to establish themselves we could see a catastrophic wave of extinction across the island,’ Professor Sarre said.

‘This research shows foxes are on the verge of becoming irreversibly present in Tasmania,’ he said. ‘Their apparent widespread distribution indicates that the eradication effort is at a critical point and that there is no time to lose.’

Professor Sarre and colleagues used forensic DNA tests combined with collections of fox scats to detect and map the distribution of the predator in Tasmania.

Their detective work, in partnership with Tasmania’s Fox Eradication Program, represents one of the largest surveys of its kind worldwide and provides the first systematic examination of the distribution of foxes in the island, following evidence and allegations that indicate a long history of isolated introductions.

According to Professor Sarre, the widespread nature of the predator distribution in Tasmania reveals that targeting only fox activity hotspots for eradication is unlikely to be successful.

‘The recently adopted plan of baiting all highly suitable fox habitats is the right one given the widespread fox distribution that we’ve found. 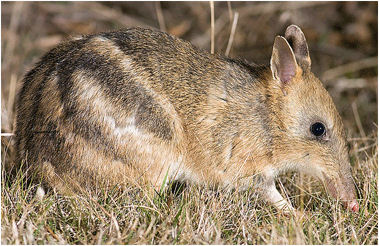 The Eastern Barred Bandicoot (Perameles gunnii) in Tasmania is one of the species at risk from the spread of foxes in the island state.
Credit: JJ Harrison under Creative Commons CC BY-SA 3.0 licence

‘The present situation could be as serious a threat to the pristine Tasmanian environment as the previous extinction wave was to Australia’s mainland fauna, following the arrival of Europeans and which has so far wiped out more than 20 species.

‘We suggest an increased effort and an even more focused approach to maximise the chances of a successful eradication. Otherwise, Australia stands on the precipice of another major episode of mammalian extinctions.’