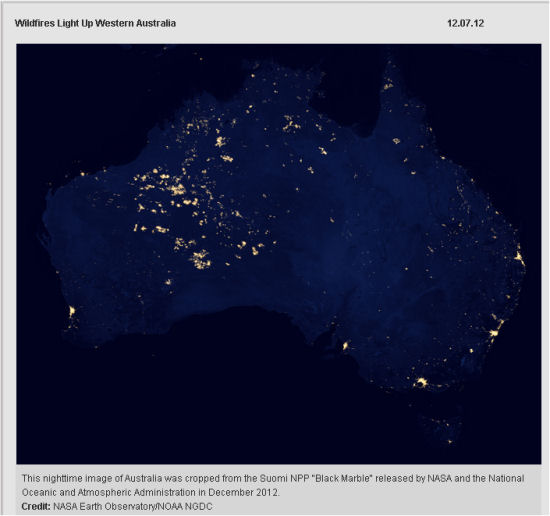 "Careful observers of the new "Black Marble" images of Earth at night released this week by NASA and the National Oceanic and Atmospheric Administration have noticed bright areas in the western part of Australia that are largely uninhabited. Why is this area so lit up, many have asked?

Away from the cities, much of the night light observed by the NASA-NOAA Suomi NPP satellite in these images comes from wildfires. In the bright areas of western Australia, there are no nearby cities or industrial sites but, scientists have confirmed, there were fires in the area when Suomi NPP made passes over the region. This has been confirmed by other data collected by the satellite.

The extent of the night lights in this area is also a function of composite imaging. These new images were assembled from data acquired over nine days in April 2012 and 13 days in October 2012. This means fires and other lighting (such as ships) could have been detected on any one day and integrated into the composite picture, despite being temporary phenomena.

Because different areas burned at different times when the satellite passed over, the cumulative result in the composite view gives the appearance of a massive blaze. These fires are temporary features, in contrast to cities which are always there.

Other features appearing in uninhabited areas in these images could include fishing boats, gas flaring, lightning, oil drilling, or mining operations, which can show up as points of light."Source: NASA December 12, 2012

Australian Agricultural Scientist Jane O'Sullivan comments, "Most of these would be fuel-reduction burns (being in April and October). Not a snapshot of current fires. However, it is remarkable how the energy released by fires over these few days of compilation appears to outweigh the energy released by lighting in built-up areas. This may also be an artifact of the compilation method: probably taking the brightest reading on each compiled image rather than averaging them. (That would explain the shipping channel images they also feature)."

What does this tell us about our land?

The distribution of these fires that are mostly unnoticed by the human inhabitants of Australia tells us something about this land of ours, which is reinforced by the map. Firstly, it gets very very hot and dry away from the sea and the only major mountain chain (which is on the East coast of Australia). Secondly, the desert vegetation is burning. (This is happening more and more often and some of the vegetation may not return due to this.) Thirdly, almost nobody notices because humans cannot easily survive in those regions. If you scroll down to the satellite and desert maps below the NASA image, you will realise why having more and more people come to Australia is a bad idea. We are using up a very thin fringe of green; it is getting hotter, and the desert is expanding into the inhabited areas, preceded by high temperatures and fire.


"Virtually all of Australia burns fairly regularly (though with frequencies that vary from annually in Kakadu grasslands to well over a century in some or most forests, but these images imply there may now be very short intervals between the burnings. Perhaps too short for many of the major desert bushes/plants to mature and set seed before they are burnt." 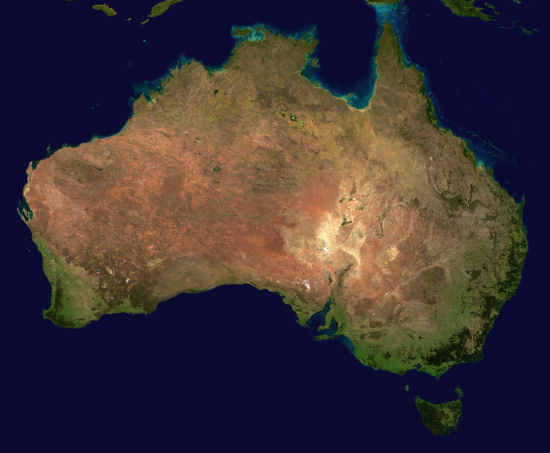 The Ten Deserts of Australia 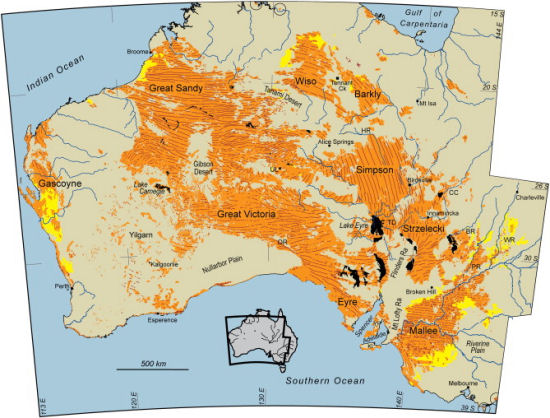 "Australian deserts [...] make up about 18% of this continent, but a full 35% of Australia receives so little rainfall, it is classified as desert. 70% of the country is classified as arid or semi-arid, which means it gets less than 500 mm of rain a year. That makes Australia the driest inhabited continent on Earth. Only Antarctica is drier. Only 3% of the Australian population live in those dry 70% of the continent, the rest of our people is concentrated on the coasts.

Hot moist air rises at the equator. It cools as it moves north or south, the moisture condenses and falls as abundant rain onto the tropical regions. Finally the now dry air sinks over the subtropical regions, warming as it sinks, which encourages evaporation, and voila: you get more evaporation than rain, perfect conditions for the formation of a desert. Source: Outback Australia Travel Guide

Some more information about the nature of Australia's desert interior comes from the abstract accompanying the desert map above:

"Independent dating evidence and dune morphology indicate great stability of the Australian dunefields. Most dunefields have seen only minor superficial modification since they were formed, up to 1 million years ago, despite quite large changes in climate conditions. This stability may be partly due to the relatively dense vegetation cover on Australian dunes under the marginally arid climate. But new studies, supported by many older observations, suggest that ‘sticky’ dunes (where sand grains are bonded or cemented) may form under a broader range of wind climates than widely thought and have greater resistance to reworking. New mapping of the Australian continental dunefields from satellite imagery shows a previously unrecognised diversity of dune morphologies. Dune orientation, continuity, connectedness, crest planform, crest sharpness, spacing and setting all show patterns of variation over the continent. These are consistent with the overall low sand supply and variable wind climate that contribute to the dominance of longitudinal dunes but also with only superficial modification of the dunes after their initial formation. The longevity of the dunes is likely also partly due to the stabilisation of dune sand by pedogenesis: the bonding of sand by pedogenic calcium carbonate, gypsum, silica and translocated clays. The extremely low mobility of the sand dunes has led to preservation of dunes of great age, with stacked accretionary units and multiple palaeosols."