Here comes an ATV -- second time today
Everybody scatters and hopes it goes away
How much sensitive habitat have they've murdered only God can say
If I had a rocket launcher...I'd make somebody pay (with apologizes to Bruce Cockburn) 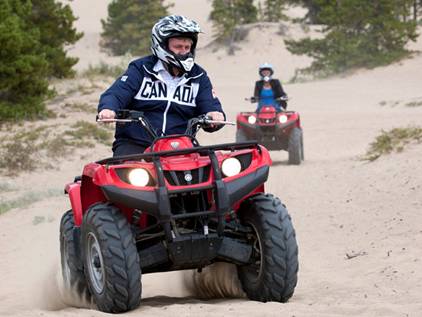 As you are a busy man, you may or may not recall a long conversation I had with you regarding the increasing menace of off-pavement “wreck”-creational vehicles on Quadra Island and elsewhere in this province.

While I am sympathetic to your predicament---- victimized as you are by savage staff level cut-backs by this disasterous Provincial government, an inability to comprehensively monitor or police the woods, inadequate legislation to deal with reckless use of off road vehicles, and the growth of a powerful off-road vehicle lobby----I nevertheless find your Ministry’s proposed solutions woefully unsatisfactory. Requiring these vehicles to display licence plates is of little benefit if the people who drive them are passing you at high speed, and who are typically hostile to anyone who would attempt to stop them for a closer look. And continuing to give over vast tracks of land to these “responsible” groups to further compromise an already beleaguered ecosystem is simply outrageous. (Outrageous, but politically smart. It is sad to reflect that while in 1968, Canadians were awed by a Prime Minister who showed off his passion for hiking, camping, canoeing and fishing, in 2013 we have a Prime Minister who in a photo op in the Yukon last August, willingly offered himself as a gleeful ATV rider to prove that he was a fun-loving guy just like the rest of us. Some fun. Some role model. But a symbol of our times. Instead of Aldo Leopold we get a pathetic Evil Kneivel-wanna be who should be advised to pick a hobby that burns calories.) http://news.nationalpost.com/2012/08/23/stephen-harpers-atv-arctic-photo-op-backfires/

Rather than repeat the arguments I made to you last summer, I thought it best to refer you to the nine page analysis made by my friend and ally, veteran ecologist, wildlife scientist and retired professor from the University of Calgary, Dr. Brian L. Horejsi. (attached “BC Parks in Jeopardy: Doors opening to vehicles on Trails” February 2013). While Dr. Horejsi's focus in this paper is on mountain bikers, his arguments apply with equal force to "motorized" offroad vehicles, which he has targeted in some of his other writings.

Among the many incisive comments that Dr. Horejsi makes, this is one is of particular relevance to forestry and park “management” in BC:

“The pathological premise that continued human and industrial consumption of the biocapacity of public lands (by for example, mountain bikes and bikers) can be “managed” at the impact end (on the trail) as opposed to the decision making “end” (before it starts) threatens dramatic interference with the ecological function of Provincial Parks as we know them today.”

Mr. MacTavish, I know that you are not responsible for Provincial government policy or Ministry directives. You are a harried public sector servant (as I once was) trying to use what powers and influence you have to mitigate what we both think is a serious challenge. I simply want you to read Dr. Horejsi’s analysis, think about it, and pass it on. Perhaps with a change in government in Victoria this coming May, these ideas will find a more receptive audience in the cabinet room and in the upper echelons of the appropriate Ministries than they have in the past dozen years.

On the other hand, even the Official Opposition---presumably the “government-in-waiting”---operates in the prevailing culture. A boorish, hedonistic, self-centered commercial culture where largely young, male thrill-seekers with a “a deep-seated attitude of denial, entitlement and disrespect” have successfully organized to displace hikers and walkers who look to escape from machines to find solace and solitude in the quiet pleasures that nature once allowed. Many of the people who will vote for this victorious party are themselves captive to this addiction to reckless speed, noise and aggression. It is a mentality that I cannot abide, and will oppose to my dying day. But my expectations of any government in this environment are few.

In other words, I will not hold my breath. Bring on $200/barrel oil.