The House of Representatives Standing Committee on the Environment has commenced an inquiry into the efficacy of past and current vegetation and land management policy, practice and legislation and their effect on the intensity and frequency of bushfires and subsequent risk to property, life and the environment. Submission deadline 28 February 2020

On launching the inquiry, Chair of the Committee, Mr Ted O’Brien MP, said that ‘many communities across Australia had experienced or were still in the grip of a bushfire crisis’.

‘We are currently experiencing a difficult, dangerous and potentially prolonged bushfire season’, he said.

‘We feel for our fellow Australians both impacted by, and trying to control, these devastating fires.

‘The new inquiry provides an opportunity to better understand the practices relating to vegetation and land management, legislative frameworks, economic impact, mitigation strategies and the engagement of emergency services.

‘The Committee understands people will have very passionate views about this, particularly in light of the current bushfire season. We look forward to hearing all views and accessing all the evidence put before us.’

The Committee’s inquiry is in response to Minister for Natural Disaster and Emergency Management David Littleproud. It will have particular regard to matters including:
past and current practices of land and vegetation management;
the impact of current legislation and regulatory responses for landholders;
the scientific basis behind relevant bushfire management activities;
legislative capability at the local, state and federal levels requiring landholders to reduce fire risk on properties;
the economic impact of severe fires in urban, regional, rural and remote areas;
the progress and implementation of various state reviews over the last decade; and
the engagement of emergency services with land management officials in managing fire risk.
If you would like to contribute to the inquiry, you can make a submission. Submissions to the inquiry will be accepted until 28 February 2020. The Committee intends to hold public hearings at various locations, which will be announced in due course on the inquiry website.

Submissions must address the inquiry’s terms of reference, which are available along with details on how to make a submission on the inquiry website.

For background information:
House of Representatives Standing Committee on the Environment and Energy
(02) 6277 4580
[email protected]

Interested members of the public may wish to track the committee via its website. Click on the blue ‘Track Committee’ button in the bottom right hand corner and use the forms to login to My Parliament or to register for a My Parliament account.

There is a breeding colony of grey headed flying foxes at Bairnsdale in poplar trees along the bank of the Mitchell River in Bairnsdale. It is now threatened by the East Gippsland Shire. This article, by Bob McDonald, contains a fascinating history of flying fox colonies in early Victoria, as well as some keen scientific observations. (Photos also by Bob McDonald.)

This letter is first to request submission to the federal process. http://www.environment.gov.au/cgi-bin/epbc/epbc_ap.pl?name=current_referral_detail&proposal_id=5017 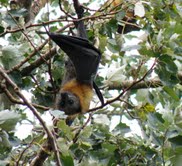 The grey-headed flying fox summer nursery colony has been on the Mitchell River Bank for 10 years.  This species, despite what DSE and some zoologists say - has been present in Victoria continuously.  The removal of colonies from Sale and elsewhere last century, accompanied by the removal of vegetation they require for a summer breeding colonies had seen these colonies lost to the south of the state. The creation of a rainforest in the Melbourne Botanical Gardens and later, around 2002-03 the growth of poplars with a dense weedy understory at Bairnsdale, has enabled them to establish two summer breeding colonies. The one from the Botanical Gardens was forcibly evicted and the grey headed flying foxes moved to red gums on the banks of the Yarra River where they suffer a significantly increased mortality rate.

The East Gippsland Shire, in response to resident’s complaints, established a process to fell the poplars in stages and replace them with native vegetation - continuing 'revegetation program'. Unfortunately designing these plantings no consideration has been given to the basic physical requirements of the grey - headed flying foxes nursery area.  From past experience vegetation will have to be least 2-30 years of age or even much older before it can provide the physical structure - especially shelter from sun - required.

The properties affected - 2-5 - have a legitimate grievance - but no steps have been taken to mitigate the impact of grey-headed flying foxes on these properties. The noise volumes experienced by residents and frequency has not been measured and proximity of the flying foxes to the properties has not been mapped. The proposal of the Shire here; http://www.eastgippsland.vic.gov.au/Your_Say/Draft_Grey-headed_Flying-fox_Roost_Site_Management_and_Action is actually illegal under the EBPC Act 1999.  By running their consultative process at the same time as the one for the federal review there has been a large degree of confusion.

I have attached an article that I wrote in last weeks (Bairnsdale) Advertiser and basic internet searches will reveal both that Grey-headed flying foxes are likely primates http://www.batcon.org/index.php/media-and-info/bats-archives.html?task=viewArticle&magArticleID=259  and their threatened status, nationally and internationally.

I am doing what I can but I would really appreciate any help and assistance that any of you could generate. Submissions for the federal process (see below) close on the 15th of February. The council date for closure of submissions finishes on the same day - but Kate Nelson of the East Gippsland Shire indicated on local ABC Radio yesterday that the council will be clearing the poplars out over 18 months.  This will lead to the death of grey-headed flying foxes, especially the young, and the loss of the breeding colony and apparently pre-empts the process established by the shire.

The alternative approach is outlined in the letter below and involves continuing the rainforest revegetation on all available public land, developing tourism potential and only removing the poplars in two or three decades time when the grey headed flying foxes move on.

Before the council takes any further action it must;

1. Abide by the Australian Federal Law

2. Actually evaluate the nuisance caused to a few residents by the fruit bats and undertake measures to reduce their impact

3. Pay for or jointly fund research to determine what the physical parameters are for this nursery colony,

a. the temperature range within the colony,

b. the current mortality rate of young and adult grey-headed flying foxes and the cause of that mortality

c. collate all the known counts of animals in this colony and undertake a monitoring the numbers of adults and young

4. Measure the noise nuisance caused to residents and undertake research to determine what mitigation measures are required and install those that do not impact grey-headed flying foxes such as sound barriers etc.

The point Bob is trying to get across is for people to send submissions to: Department of Sustainability, Environment, Water, Population and Communities
GPO Box 787
Canberra ACT 2601

Send copies to the East Gippsland Shire and The Department of Sustainability, Environment, Water etc.

Email correspondence can be sent to [email protected]