Yesterday, in Cyprus, ordinary citizens turned up to take money out of their accounts via EFTPOS and could not access their cash! This has actually happened. Overnight sums of money have been levied directly on every bank account in a country, apparently with the authority of the IMF and the European Union. There is nothing to say now that any bank account in the world is safe from similar action. This is a new bad era. The rules have been smashed. 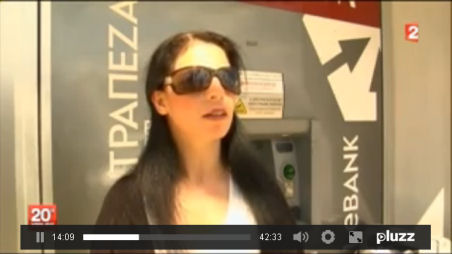 Whilst the US borrows to continue spending, it imposes, with the IMF, austerity measures on Europe. This is grossly unfair on Europeans when one considers that Europe's financial problems largely result from international banks stupidly and greedily investing in the United States Sub Prime and Housing bubbles.

An 'austerity rescue plan' negotiated in Brussels has just authorised an exceptional tax on individual bank accounts in Cyprus. Money has been deducted electronically on with the authority of the EU and the International Monetary Foundation (IMF) without consultation with account holders. 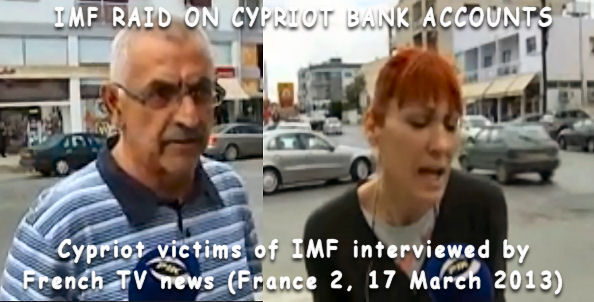 Yesterday, in Cyprus, ordinary citizens turned up to take money out of their accounts via EFTPOS and could not access their cash!

This has actually happened. Overnight sums of money have been levied directly on every account in a particular country.

This is the first time such a thing has ever happened.

Until now the security of deposits had never been questioned.

Cyrprus is a tiny little economy, forming 0.02% of Europe's but it has an enormous banking sector. Cyprus is an offshore tax haven.

Russian capital there amounts of tens of billions of euros.

The intention of the European Union and the IMF was purportedly to take tax-haven money from where it was being protected in Cyprus, but - astoundingly, shockingly - the bank accounts of all Cypriot citizens were included in this extreme net!


"The President of the European Parliament asked that the tax not be made on accounts with less than 25,000 Euros, but he had little chance of being heard."

Obviously people must now fear more of the same in other countries. One thinks of Greece nearby.

Will people start taking all their money out for fear of it being taken from their accounts?

"Today a taboo has been smashed and confidence in bank accounts has been broken,"

The very foundations of banking have been smashed. Sociopaths are running the system.

What are people to do? This is an aggression by the banks, in cooperation with the International Monetary Foundation on citizens, potentially on citizens throughout the world. Anyone with a bank account should be banging on the door of their local parliamentarian tomorrow morning and insisting that his or her party do something to stop this happening now. The perpetrators must be punished and imprisoned. How can the European Parliament have permitted this?

It must not be allowed to stand. The IMF must reimburse the citizens of Cyprus.