Mornington Peninsula[1] The writer of an article about ecosystem need for top predators claims that "Observations on trees and experience with possum guards by the author indicate that possums are the major cause of tree decline on the Mornington Peninsula ..." 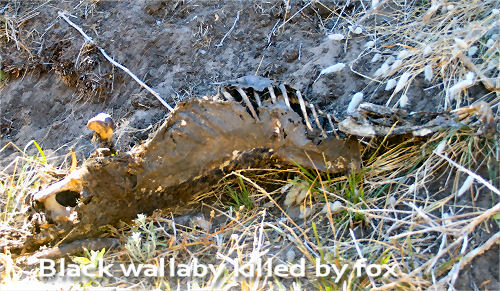 Hans Brunner: I am somewhat alarmed that a highly respected ecologist, Dr. Jeff Yugovic, can declare that possums on the peninsula are in plague proportions (published in the journal Indigenous, “Do Ecosystems need top predators?”) and that this was supported by Carol Shelton on behalf of Mt Eliza Association for Environment in form of a press release. There are probably many other people who would agree with Yugovic and Shelton merely because they don’t like possums jumping about on their roofs during the night.

I myself believe in scientific evidence.

Where are the regular spotlight counts that establish the real numbers of possums compared to the number of trees available to them in a given area?

Where are the true numbers of trees that actually die from possum browsing compared with trees dying from the many other reasons?

I have inspected lots of sick-looking trees without finding possum droppings under them and no signs of browsing. I can find more possum droppings in built-up areas under power-lines used by possums than under trees and in those areas all the trees look healthy.

The assumption that there is a plague of possums on the Mornington Peninsula resulting in the destruction of the tree canopy is in my view only a hypothetical observation and is definitely not based on rigorous scientific and unbiased research.

Over the last three years Victoria has experienced each year one or two severe heat waves. As a result, thousands of possums died in those years from heat exhaustion. So, where now is this “plague” of them?

With more heat-waves predicted in the future they may even become endangered.

The suggestion that we overdo predator control and that, on the contrary, we need more foxes, cats and dogs to reduce possums is totally irresponsible.

Because of these predators - foxes, cats and dogs - on our Peninsula, nine (9) native mammalian species have already become extinct, five (5) species have become extremely rare and another two (2) are endangered. And this is just mammals!

This same ratio or worse applies to species of birds, reptiles and amphibians.

While I think, and hopefully all of us agree, that in large natural environmental ecosystems a balance between predator and prey species is essential, here on the Peninsula the situation is very, very different.

The expectation that an increase of predators may reduce a few possums would surely be badly out-weighed by the risk of losing proportionally even more of our rare, native wildlife species.

Putting flexible plastic sheets around the trunk of trees, to be effective, would require being done to every tree on the Peninsula, because if possums can’t go up one tree they would soon find another one. Even if this were possible, practical, or desirable, the risk is that it will also exclude koalas, sugar gliders, marsupial mice and reptiles accessing these trees in the same manner as possums.

So, please don’t make possums the scapegoat and declare war on them!

[1] The Mornington Peninsula is in Victoria, Australia.
Comment by Candobetter.net editor: It was declared part of the UN Biosphere series a few years ago, in one of many attempts to save its biodiversity and considerable natural ammenity, but despite this, it is sadly being covered in roads and housing by successive troglodyte Victorian governments.