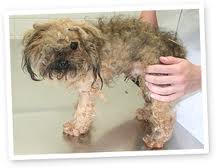 Back in 2010, the Victorian Government made a pre-election promise to increase penalties for breeders found committing acts of cruelty and to eliminate illegal and/or poorly run puppy farms. Considering this, it is appalling that the Government is recommended "revisions" to its Code of Practice for the Operation of Breeding and Rearing Businesses. This code sets out the minimum standards of accommodation, management and care required by breeding and rearing establishments. This revision would legalise some of the abhorrent conditions and practices regularly seen by RSPCA Inspectors at puppy factories.
(images are the property of Oscar's Law) 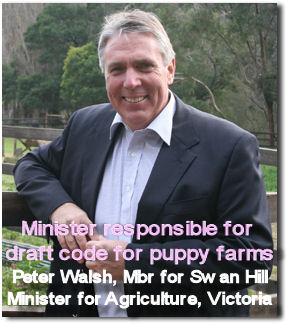 I and many of the caring members of the public, would like to see the end of intensive breeding of dogs and cats for domestic sales.  Why, when we have shelters overloaded and excessive numbers of animals being dumped and on death row, should these "businesses" operate anyway?

Companion animals should be that - companions.  It shouldn't be an industry.  More people are moving into units and apartment and animals are banned.  Shelters and rescue organisations/charities end up picking up the pieces, the high numbers of animals discarded by society because of over breeding.

Downgraded and inhumane conditions for the benefit of the industry

Under the revisions, staffed ‘business hours’ for breeding and rearing establishments have reduced from 12 to eight hours a day.  How are the animals meant to be cared for and their social/environmental needs met?

Litters need care and attention and mother dogs should be nurtured and protected.  Long periods of isolation and non-attendance is not acceptable.  They don't need to provide any warm bedding and there's no cap to the amount of litters that dog can have, so it can be legally bred for birth to death.

Puppy factory dogs are viewed only for their ability to make their owners’ money. Puppies are often confined in crowded cages with no room to move.   The mortality rate of the puppies is quite high because veterinary care is scarcely provided. Puppies that do survive and are sold often suffer from ongoing health issues that the new owners have to pay for.

Vet checks to ensure animals are fit for breeding are no longer required before animals are bred from.  How are any standards of "animal welfare" to be improved?  Breeders will be able to declare an animal fit for sale – rather than vets.   How will they be qualified?

The recommendations allow for ‘any method’ of euthanasia as long as it is humane. Humane is not defined and ‘any method’ could, in theory, include shooting or blunt trauma, causing incredible suffering.  How is "humane" meant to be defined?  We can't feel the animals' pain.  This could mean animals are open to horrific attacks, and it's called "euthanasia".

There must be 24 hour per day veterinary access for the animals if they are sick or injured.  "Any method" is far from being acceptable and chillingly callous.

There would be no maximum breeding age or period that an animal could be bred from, meaning these animals can potentially spend their entire lifetime confined to breeding establishments.  Dogs and cats would be condemned as breeding machines, and valued for nothing more than producing litters.  How is this "animal welfare"?  This is commercial breeding, and all the evils associated with it.

Under the recommendations, some categories of puppies must not be left without food for more than 12 hours.  The feeding of raw offal is now permitted in conjunction with a complete worming program.  Standards of animal care are being weakened to cave into the industry's political and commercial powers.

A blight on our society

Puppy factories must end.  There's no way to soften and make acceptable the fact that they are inhumane and a blight on our society.

If animals are to be adopted, first and foremost the potential buyers should go to one of the many shelters and homes for dogs and cats.  There are many needing homes.  Otherwise, they should go to a breeder and get expert advice.  Puppy factories operate in secret, and they can't be contacted. They are not transparent to the public.

These callous breeding facilities are producing animals for mass markets, without accountability.  Australians should be enlightened and our society should be walking and working towards more humane animal welfare systems, not in the retrograde darkness of lost and unwanted dogs and cats, and "businesses" breeding animals in cages for profits.  They are cruel and unjustified, and are producing litters of animals for an already saturated market.

Pet shops should be linked to shelters and registered breeders, and not be allowed to sell the products from puppy factories.

Puppy factories must be banned

The Victorian government should ban puppy factories, not trying to weaken standards and loosen controls for the benefit of a few owners of these shameful establishments.  These dark places can't be justified by money or profits. The government should be setting high standards, not caving into profit-making through the use of small and defenceless social animals.

We can all help fight the genocide in Australia's pounds, promote rescue organisations and shelters as the first option to adopting, and change the way Australians gets their pets. Adoption is the intelligent alternative to impulse buying. No puppy factory whether it is 'clean', 'model', 'state of the art' or otherwise is the answer for mans best friend.

Oscars Law is an organisation committed to "We no longer want the pet industry to mislead us about what is acceptable for our animals”.

Oscar was one of a number of dogs who were rescued from a puppy factory in central Victoria where they had been neglected to the point they required urgent veterinary care.

The list of ailments the dogs suffered was extensive, including:

Severe matting — the dogs had to be sedated in order to shave their painful matted fur away from their skin; ear infections; gum disease; and rotten teeth. Once their matted fur was shaved it was evident that painful grass seed abscesses covered their bodies. The dogs were so severely malnourished their irritated skin was like paper and they were grossly underweight.

Days later and recovering from surgery, Oscar was returned by authorities to the very people who failed to provide veterinary care and neglected all their dogs including Oscar. They have never been charged with cruelty and Oscar remains in the puppy factory.

Oscar’s Law Campaign is in memory of all the ‘Oscars’ hidden away on factory farms treated as breeding machines to supply the pet industry.

Make a submission to the DEPI

Submissions may be emailed to [email protected] or posted to