In an Australian regime that is determined to repress environmentalism, we should all be aware of what is happening in this case. Jonathan Moylan, 26, will appear before the Supreme Court in Sydney for sentencing this Friday 11 July, supporters will be outside court from 9am. In January 2013 Moylan issued a press release on ANZ letterhead saying the bank had withdrawn its $1.2 billion loan facility from Whitehaven’s Maules Creek Coal Project on environmental and ethical grounds. The mines threaten koala habitat. Whitehaven’s share price temporarily fell before quickly recovering. Moylan is charged under section 1041E of the Corporations Act, pertaining to the making of false or misleading statements, and faces ten years in prison and a $765,000 fine.

When: Friday 11 July, supporters will gather outside the Supreme Court of NSW from 9am.

Media Contact: Rick Laird, Maules Creek farmer, is available for comment. Call Nicola Paris on 0422 990 040 to arrange an interview and for further information.

Rick Laird is a farmer from Maules Creek. His family has been farming in the district for more than 150 years, but the future of their farms is now under threat from Whitehaven’s ANZ-funded Maules Creek coal mine. Rick will travel from Maules Creek with his brothers, also farmers from Maules Creek, to support Jonathan Moylan at court on Friday.

Jonathan Moylan will not be available for comment before sentencing. His availability to comment after sentencing is dependent upon the sentence handed down.

Leard State Forest is located between Narrabri and Boggabri, it includes the most extensive and intact stands of the nationally-listed and critically endangered Box-Gum Woodland remaining on the Australian continent. The forest is home to 396 species of plants and animals and includes habitat for 34 threatened species and several endangered ecological communities.

The Maules Creek Coal Project is approved to extract up to 13 million tonnes of coal annually and is estimated to produce 30 million tonnes of CO2 equivalent per year. The mine is expected to operate for more than 30 years. The coal will be railed from the mine in north west NSW to the port of Newcastle for export. The coal mine project boundary is approximately 5 kilometres from the Maules Creek township.

Maules Creek farmer Rick Laird speaking in support of Jonathan Moylan at a court hearing last year told media: “We’ve been fighting these mines for years, and people are finally starting to hear about it. You’re only given limited ways to challenge mine proposals, and they get approved anyway, even if it means the end of a community. If these mines go ahead, it’s the end of our livelihoods. We won’t be able to farm the land and we worry about the impact of coal dust on our health. The Maules Creek community stands with Jono.”

Today, June 4, 2014 there was a Snap rally to protest at Mining giant Whitehaven Coal is sending an army of bulldozers to flatten the ancient Leard Forest located in the North West of New South Wales. The rally took place at midday at Governor Phillip Tower, 1 Farrer Place, Sydney. Dozens of protesters at Whitehaven Coal's Maules Creek Mine have been arrested. A total of 82 protesters have been arrested and removed from Leard State Forest.

Leard Blockade: Police move in on protesters at Whitehaven Coal's Maules Creek mine

Dozens of protesters have been arrested at Whitehaven Coal's Maules Creek mine, near Boggabri in north-west New South Wales.

Police confirmed they entered the Leard State Forest this morning and occupied trucks, scrapers and road rollers to stop mine workers from clearing the land.

Click here for Videos of past Leard Forest blockade actions

A total of 82 protesters were arrested and removed from the site.

Police say the charges relate to hindering the working of mining equipment, entering and remaining on enclosed lands without reasonable excuse, and resisting arrest.

Melbourne protester Phil Evans from the Leard Forest Alliance says police moved in about 10:00am (AEDT).

"The police have come along and we've had some folks, especially some of the older folks in our crew sitting down on the ground on chairs and they've actually been arrested, including our oldest member, 92-year-old Bill Ryan, who is a World War II Kokoda veteran," he said. 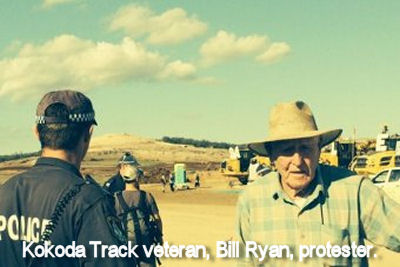 "I'm actually about four metres up off the ground on top of a machine at the moment.

"I would say there's probably around 20-25 police on site and I can actually see nine vehicles along with a very large police van obviously for transporting multiple people."

The protesters say the mine employees remain on site but no work has been done today.

However a Whitehaven spokesman says the protest has not disrupted work on the mine.

The protesters say on top of the arrests there have been 10 to 12 personal infringement notices issued which carry a fine of $350 each.

Those arrested have been issued with court attendance notices for the 29th of April. 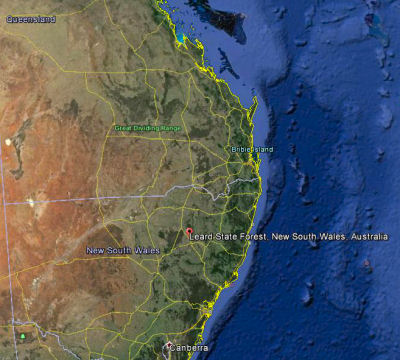 Photo: Protesters occupying vehicles at the Maules Creek mine, owned by Whitehaven Coal, near Boggabri in northern New South Wales.

The video here is from an earlier protest in October 2013.

25 year old, coal-mine activist, Jonathan Moylan has made his first appearance in the Supreme Court of New South Wales today, where he entered a plea of not guilty. The ongoing case was moved from the Downing Centre Local Court to the Supreme Court on the request of the prosecution. Supporters stood out the front of court holding placards and banners showing their support for Jonathan and his actions. Mr Moylan was also supported by his parents, and his twin sister.

Maules Creek local farmer Rick Laird, whose property is threatened by Whitehaven’s proposed mine, also attended court with Mr Moylan. The Laird family has owned property in the area for 150 years and are the namesake of the Leard State Forest, two thirds of which will be destroyed if the proposed mines in the area go ahead.

“We’ve been fighting these mines for years, and people are finally starting to hear about it. You’re only given limited ways to challenge mine proposals, and they get approved anyway, even if it means the end of a community. If these mines go ahead, its the end of our livelihoods. We won’t be able to farm the land and we worry about the impact of coal dust on our health,” said Mr Laird.

“The Maules Creek community stands with Jono,” said Mr Laird, out the front of the court house where a large contingent of people from the Gomeroi nation, also joined the vigil. 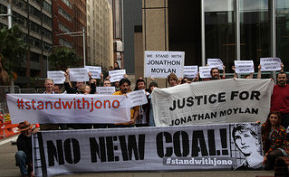 An international campaign has also been growing with Jonathan receiving support from prominent figures such as Noam Chomsky, Bill McKibben and David Suzuki. In recent days there has been coverage in several European papers.

“It is an honor to stand with Jono, to support him in his dedicated and courageous actions to defend all of us against the scourge of coal mining that is destroying the prospects for decent survival, and to protest, vigorously, the harsh sentence for actions that merit praise, respect, and thanks,” said Mr Chomsky.

David Suzuki has recorded a video message, which will be released in coming weeks and says, "Do I support Jonathan Moylan? You bet I do. He's a hero."

Author, environmentalist and founder of 350.org, Bill McKibben said, "Harshly punishing nonviolent action against the coal barons is not just spiteful and mean, it's stupid. Mr Moylan clearly speaks for the future."

In a campaign video that has been widely circulated high profile barrister Brian Walters SC stated, “Jonathan served ANZ shareholders by making them aware their resources are being used unethically."

In January this year, Mr Moylan sent a press release on ANZ letterhead to the ASX stating that the bank would withdraw financial support from Whitehaven’s Maules Creek open cut coal mine on ethical grounds.

Mr Moylan is being prosecuted by the Australian Securities and Investments Commission (ASIC) under section 1041E of the Corporations Act, pertaining to the making of false or misleading statements. He is the first individual to be charged under that section of the Act.

More background here and in the video released by the campaign. You can download a high resolution version here or view on the website: www.standwithjono.org