Jill Quirk of Sustainable Population Australia (SPA), Victorian and Tasmanian Branch, writes about the many problems of Plan Melbourne. Indeed there are so many problems that it is crazy to go ahead. But most of us realize that the Planners and Ministers behind Plan Melbourne intend to just go on driving bulldozers until something bigger stops them or they run out of oil. There is no plan B and so no room to listen to comment. This is a real problem for the rest of us because we live here. 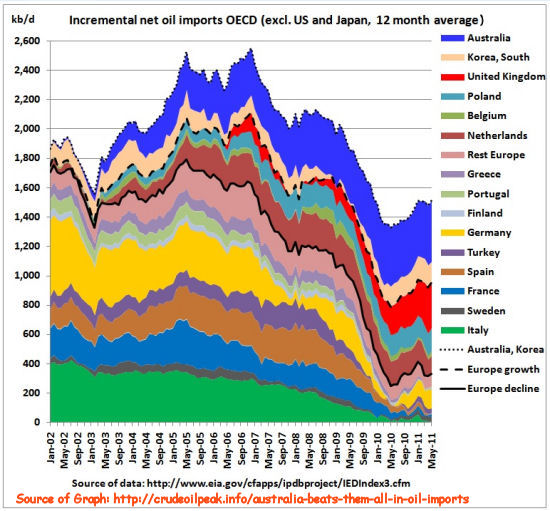 This graph comes from a website maintained by Sydneysider, Matt Mushalik. The title of the page is Australia beats them all in oil imports. Matt's graphs show that Australia is consuming oil at a profligate rate in the light of our need to import the stuff and compared to the rate of many other countries with larger populations and sophisticated economies. In an illustration at the bottom of the page he links this unwise consumption pattern to avoidable building of new infrastructure. He writes in 2011 but the current government is just as bad.

Plan Melbourne is a strategic plan to accommodate very high population growth to the middle of the century, a mere 34 years away. A major flaw in this narrowly based document is that it is working on a projected population for Melbourne of 6.5 million, yet at current growth-rates, the population would actually be 8 million in 34 years time. By the end of this century these current trends would give a population for Melbourne in the order 20million plus – the size of Beijing now.

What is really needed is a vision for beyond 2050 and the sense to change direction before it is too late.

It should be the responsibility of the government through Plan Melbourne to paint the picture with graphic accuracy of what sort of future we face – and the lack of choices entailed - if population growth does in fact continue at the rate it has been in recent years.

These are drastic changes in population density and numbers. Melbourne will be very crowded. There will be very little choice in how most people live or survive. In fact these levels of population increase will make many parts of Melbourne quite unrecognizable. Virtually no link will remain to the past. It is known that rapid change in surroundings depresses and disorients people. This level of growth is so huge that it can’t fail to do this.

No good government should risk our lives like this

One elephant in the room that cannot be ignored is that growth does not stop in 2050. Unless measures are taken to reduce overseas immigration, the wheels are now set in motion for the ever-increasing population growth trajectory to intersect with ever decreasing fossil fuel resources, rising sea-levels and weather extremes. This is like bungee-jumping today’s and future generations on the end of the same frayed old rope over an increasingly shallow pond. No good government should risk our lives like this.

Our current rate of population growth however doubles this requirement.

Property value ‘uplifts’ a drain on productivity and real wealth

It is mentioned in the document that with new infrastructure residents get the benefit of “Property value uplift.” This is of absolutely no consequence unless the person is selling a house to live somewhere else lacking infrastructure and which has not had a “value uplift” from new infrastructure. “To make this clearer; If I only have one house and sell it for a high price, I still have to buy another house to live in and both prices will probably be inflated, with further costs in conveyancing.”

Furthermore such ‘value uplifts’ inflate costs of living and doing business for buyers and renters. Australia’s extreme rent, land and housing prices erode profit margins, raise cost of living, and cause upwards pressure on wages. Whilst workers may want higher wages, this is a drag on productivity if those wages simply go in paying rent and mortgages. The only people who benefit from high housing prices are those with more than one house, including professional developers. These people are not in the majority and, in another system, their activities would be construed – accurately - as a cost to the community.

The document talks about providing “certainty” to businesses and residents about where development should be. In the context of never ending population growth, infrastructure expansion and layering, the concept of certainty is Orwellian for citizens. The only certainty for residents in a situation of explosive continuous population growth is uncertainty. This is a very poor substitute for local roots and empowerment in a stable and tranquil environment.

Certainty has more positive connotations for those who are professionally invested in the “pipeline of infrastructure projects”. Plan Melbourne will, it seems improve certainty for the companies who specialize in the industries that make, deploy and market infrastructure.

It seems like a never ending process of population growth and added infrastructure. It wouldn’t be so bad even with the costs to the population if “infrastructure” did not involve heavy losses of nature, livability, space, and peace whenever they go ahead.

Peninsula LinkTake for instance the Peninsular Link which decimated the pre-settlement property of Westerfield. This is a huge loss to the people of Victoria into future generations. It can never be restored.

East-West LinkThe other infrastructure project which is encountering substantial opposition from the community, especially those living in the area, is the East-West Link. This piece of road necessitates demolishing people’s houses, destroying the wetlands of Royal Park and bisecting the park especially during construction. All this pain, despite the fact that any planned relief of congestion will soon be overtaken by more population growth.

The East-West Link will remove a large proportion of a public asset from the public forever. Furthermore, this asset was a crucial part of the original forward thinking design of the Melbourne settlement, which sought to ensure open natural spaces for the general public. It was also a major corroboree site. Its historical significance seems to have been completely overlooked. Adding insult to injury, we who are to be deprived of it will be made to pay for our loss.

In the document the “challenge” of providing water (for an endlessly growing population) was mentioned. This is not a challenge but a depressing consequence. The Sugarloaf pipeline was a piece of infrastructure which also encountered huge opposition in the area from which water was to be taken. What would one expect? Such projects displace and dispossess stable communities which, in the line of right to self-government, ought to have more say, and the possibility of veto, in the matter of population engineering that results in this social and environmental disorganization and damage.

The construction of the Wonthaggi desal plant, removed part of Victoria’s natural heritage, causing huge destruction, protests, tears, and anguish.What more blights on our landscape are in the infrastructure pipeline?

Only economists could pretend that oil depletion is not a problem

Returning to the notion of “vision.” Australia’s economy in the living memory of all of us has been fueled by cheap oil. This has reached or is reaching the peak in its production, globally. The document cites oil reserves in Gippsland, but Australia is a net importer of oil. Whatever is found in Gippsland should be treated as rare and precious and something we should bequeath to future generations.

The Victorian short term government should lengthen its horizon. Thirty seven years is not a long time really. It should try to see at least to the end of the current century.

With falling availability of cheap oil, road networks will be outdated and redundant. The inevitable loss of arable land around Melbourne with continuing population growth and consequent infrastructure development, will put an unprepared and unsuspecting relatively newly arrived urbanized population in serious peril with respect to food.

Plan Melbourne treats high population growth as though it were inevitable. It is not. 60% of our population growth is from overseas migration. The Victorian government, rather than reassuring the Federal government that it can accommodate whatever level of growth is dictated by immigration levels, should tell it how it is, that people are suffering and will suffer more.

This is also where local government should play a role. Local government is closer to the locality and the local community (by definition) and is in a better position to respond directly and democratically to local feedback and capacity. It is unfortunate that the state has largely overshadowed the power and role of local government because people are maintained now at a distance and not listened to or taken seriously, with market principles (Coasian economic principles and Pareto superiority ideology) overtaking self-government, social responsibility and environmental connectedness.

It is quite telling that the document talks of protected areas within municipalities and those destined for more development and densification. It seems from reading the document that these latter are actually not protected. Don’t the people living in these areas deserve protection from loss of their amenity, from overcrowding, noise etc.? If fifty per cent of Melbourne will be “Neighbourhood residential” that means that fifty per cent will be unprotected!

The overall sense from Plan Melbourne is that it expects the future to be similar to the past, except bigger. It seems to be working on the assumption of a supply of new arrivals and a supply of infrastructure projects without reference to resource depletion and environmental entropy. This is the Archilles heel of modern economics; the externalizing of environmental and social costs – that is, pretending that they are not there. The document for submissions minimizes input on all political, social and environmental matters and on the most significant of all – the upwards social engineering of population growth.

Whether or not the government wants to hear about them, there are environmental and social costs and it is the duty of government to listen to the people on these matters.

The 2013 State of the Environment report states that greenhouse indicators are up, the condition of fresh water aquatic systems is deteriorating as is the fate of threatened species and native vegetations. Of 30 indicators covered by the report, 16 were poor, five were unknown and two were unassessed. The previous SOE report put down to population pressure most of its devastating findings. We are ruining our natural environment with population growth, but we could stabilise our population this century if we tried. If Plan Melbourne goes ahead, we will not stabilise our population this century, but instead will be like a contemporary third world overpopulated country. Plan Melbourne facilitates this dystopia.

Based on a submission by Jill Quirk, President Sustainable Population Australia, Victorian and Tasmanian Branch