"If Oregon can shut down highway construction adjacent to its zoo for four months over concern with the health of one pregnant elephant, what are the ongoing risks to the animals at Melbourne Zoo? These are amongst the questions that need answers before any contract is awarded." Michael Petit 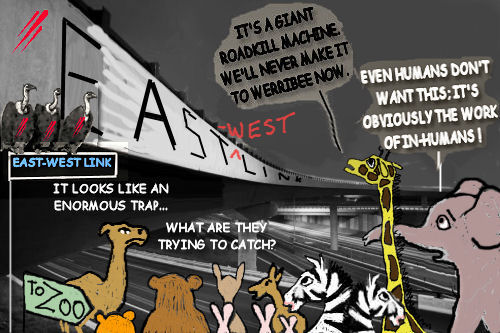 Candobetter.net has been forwarded an important communication written by Michael Petit on "the need to get the Melbourne Zoo or State Government to commission a detailed study on the serious health risks to vulnerable animals at the Melbourne Zoo prior to the signing of a contract for the East West Toll Road and Tunnel." [Headings added by candobetter.net editor]

"An examination of the Linking Melbourne Authority (LMA) Comprehensive Impact Statement (CIS), video and media comments makes it clear that any detailed examination of the noise, vibration and lighting from the Toll Road and Tunnel that comes within 100 metres of the Melbourne Zoo will not occur until after the contract is signed. This would be a huge mistake.

Throughout LMA's documents and statements it reveals no detail whatsoever on anticipated levels of noise and vibration but simply says that the project will (quote) "meet international standards."

However, the noise levels sanctioned by VicRoads for new major toll roads including the East West Toll Tunnel are at levels that according to two Reports from the World Health Organization sanction levels that cause adverse health effects on people and by reasonable extension to vulnerable zoo animals. Tolerable noise levels are critical at night when species such as elephants and rhinos that will be within 100 to 150 metres of the project and, like people, need a good night's sleep.

However, VicRoads permits noise levels of 63 dB(A) for new toll roads and 68 dB(A) for old ones so its multiple claims in its Comprehensive Impact Statement documents that they 'meet international standards' is simply not the case."

The World Health Organization comparable standard for Europe is 55 dB(A) as is the 55 dB(A) set by the New South Wales road authority including works on the Northern Pacific Highway. It is an even a lower 45 dB(A) for applicable road works in Hong Kong. These are the real international standards.

[... T]he State Government is fond to cite the tunnel under the Oregon Zoo as an argument for its East West project. But there are some very significant differences.

The tunnel was 79 metres below the surface in Oregon but will emerge or start at ground level and burrow 30 or 40 metres underground directly outside the Melbourne Zoo. It was already at 79 metres depth when it passed under the Oregon Zoo. Also, the elephant area at the Oregon Zoo is between 200 and 300 metres from the major Sunset Highway US 26 compared to 100 to 150 metres in Melbourne. More than twice the distance in depth and distance. And, in Oregon, the Department of Transportation suspended works on US 26 for four months to avoid any risk of miscarriage for one of the elephants at Oregon Zoo.

"We should therefore not only be concerned with vibration and noise during construction but on an ongoing basis as thousands of trucks from Port Melbourne stream through the tunnel hour after hour, day after day. This raises a number of interesting questions such as whether there are animals that may have to be relocated during and/or after construction and why is the Zoo not asking more questions! And, as the gestation period for elephants is 22 months, are there any pregnant elephants at Melbourne Zoo or likely to be over the next five years proposed for construction of this toll road and tunnel project?

If Oregon can shut down highway construction adjacent to its zoo for four months over concern with the health of one pregnant elephant, what are the ongoing risks to the animals at Melbourne Zoo? Will some have to be relocated?

These are amongst the questions that need answers before any contract is awarded.