The other day whilst walking on a quiet bush track with a friend, we came across a magpie standing on some grass surveying the scene, including the pair of us. My friend said rather scornfully "I don't like those birds!" People who would never dream of vilifying a group of people on the basis of their race seem to have no compunction in vilifying members of an entire species often on the basis of nothing. Comments may seem harmless enough at first but on further reflection one realises they can be an incitement to harm. Is there a moral difference between racism and "species-ism"? 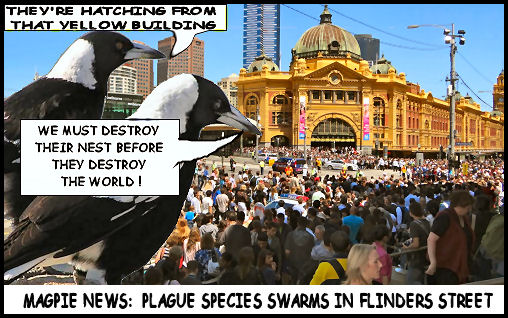 The other day whilst walking on a quiet bush track with a friend, we came across a magpie standing on some grass surveying the scene, including the pair of us. My friend said rather scornfully "I don't like those birds!" I felt anger rising and I asked her why she didn't like them. She said "because they are big. I like little birds" Then she added "They're everywhere!" (We had seen 4 in about half an hour.) I felt really troubled. Someone who says this about a creature and all the other members of the species will shoo the birds from her garden with impunity. I felt that her dislike threatened the birds. I tried to educate her, alerting her to the magpie song, telling her who it belonged to as we heard it amongst numerous bird calls. She was not interested. She was looking for a rare wildflower, not s creature that was "everywhere". I was annoyed and worried by her prejudice.

...and the wattle birds!

Similarly I feel very irritated when I hear people saying that they don't like wattle birds because of the sound, one which is hard to describe but which I hear only rarely where i live. I would love to have wattle birds in the garden and have tried to grow flowering native plants without much success due to insufficient sunlight.

..and the black swans!

Strolling in the Melbourne Botanic Gardens recently I could not see any of gardens' signature black swans. Instead I saw punts on the lake with people aboard. The gardens were extremely busy with functions, picnic-ers and a new kind of sport looking a bit like croquet with square hoops embedded in the lawn. I said to the people I was with "Can't see any swans!" "No" one of them said "perhaps they've got rid of them" adding,as if to justify what may have happened "They can be aggressive!" Once again my blood boiled. I have been visiting the Botanic Gardens since I was a child and the swans have always been there. Sometimes they are on the water and sometimes they stand on the grassy banks of the pond. I have never seen a swan attack a person. Maybe someone's unsupervised child teased a swan and it defended itself or its young, not knowing that the small aggressor was someone's precious offspring? I felt affronted at the swans being described as "aggressive". To attribute them thus justifies any measures that humans may take against them.

Kangaroos are another species that get bad press. Their supposed "crimes " are that "they jump out in front of cars" (thus committing suicide - just to annoy motorists I suppose), and they are accused of being in "plague proportions" ! When an animal is accused of being over plentiful, it is in grave danger, and the kangaroo is. They are just slaughtered, for a mixture of "reasons" - "for their own good as they are eating themselves out of house and home," "there are too many of them," "they are competing with farm animals for pasture," "they are a good healthy source of of protein and can form an export industry". These animals now live a hazardous life on the fringes of golf courses taking their lives in their paws as the white missiles fly off the gold clubs or they inhabit the edges of the ever growing city as their habitat is swallowed up with roads and housing.

I'm sure the Thylacine had similar bad press up until it was too late to save the species. Of course the Thylacine committed the added sin of being a predator . Now people so want to see a Thylacine that they imagine they have detected those hallmark stripes flashing past in the under- storey of the Tasmanian forests. Discrimination against an animal on the basis of its species is in my opinion a prejudice which I will call "species-ism" , surely a displacement attitude to the forbidden attitude "racism".

Motivations and origins of attitudes

What motivates species-ism and what motivates racism? What do these attitudes have in common? The first motivation that comes to mind is the desire for the loathed group to be anihilated. Why would we want a people or members of s species to be annihilated? The obvious answer is that they are in the way. If you want to take over their land you put them in an inferior or undesirable category, or a category where they and their welfare don't count, where it is pragmatic for them to be dismissed as a consideration. On having gained the upper hand and having taken over, further excuse to keep killing or marginalising is so that the takeover can continue and expand with no real challenge. Just as racism is unfair and really dangerous for members of its target group, species-ism is unfair and dangerous for members of the target species. Racism and species-ism both serve to vilify a group or groups and making their members not matter. Both come from the same place in the human psyche. The objects of their enmity are innocent.

The news that the Copenhagen Zoo has carried out the execution of the resident young male giraffe, and cut his body up in front of onlookers, feeding him to the resident lions also in front of a young audience is macabre, insensitive and devoid of judgment and empathy... 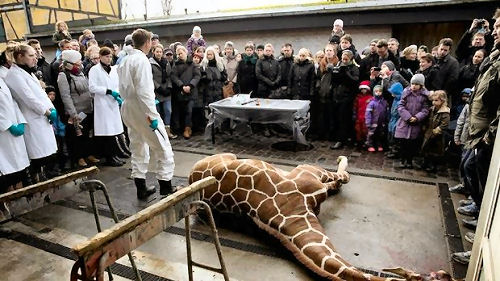 We all know that lions eat meat and that in the wild they hunt and eat giraffes. In captivity, lions must be fed meat but it is a very far cry from feeding a captive animal “meat’ to feeding it the identifiable body parts of a named personality in the zoo , one who has died at the hands of the zoo authorizes for no crime whatsoever but for the very dubious reason that it’s genes were too like those of the other giraffes in the zoo.

We are supposed to think that this is OK! It is not OK ! Apart from being a crime against the animal who was in the care of the Copenhagen Zoo, to deliberately show the feeding of Marius to the lions to children is try to desensitize them to what was really a ruthless killing and amounts to a sort of pornography.

We all need to come to terms with our own omnivore /carnivore natures in the industrialized urban society many of us live in, divorced from nature but to commit this act, to show it to children and to expect them to understand is for want of a better word – sick.

I know a child can take in that a farm animal becomes meat on the table, but this incident in Copenhagen is ... gratuitous flaunting of the horror of zoo life. Are the children supposed to mull this over and conclude that it is OK because the respected zoo did it? It’s not OK! I wonder if Princess Mary's children were treated to this display.
In a way, for utter disregard of other creatures this possibly even beats the systemic mismanagement, cruelty and neglect of animals in the Surabaya Zoo. (Indonesia)

This planned and premeditated exercise in Copenhagen was carried with chilling efficiency and horrifies me as much as Surabaya Zoo's apparent careless neglect.

As with any such story, the killing of Marius the giraffe is ten times as distressing on knowing that it is common practice to kill healthy animals in zoos if the genes match too well.