According to this author's research, Malcolm Fraser contributed policies which would assist the dismantling of Australia's then growing democracy and aid and abet this colony's overpopulation and overshoot of its own resources. These actions should not be forgotten, despite any subsequent helpful comments on foreign policy, a long time later. After the Whitlam government was sacked, and during high unemployment, the Fraser Liberal/National Party government (November 1975- March 1983) reinstituted economic policies that were dependent on rapid population growth - through high immigration - and high energy consumption. [1]

Whitlam's concept and attempts to create a system of feedback loops from population to housing were dismantled or under-financed. Prime Minister Fraser abolished DURD very early in his government, under which Federal funding for urban and regional development declined by 86 per cent. [2] He also began to liberalise the foreign investment rules, with the Foreign Takeovers Act (1975). [3] 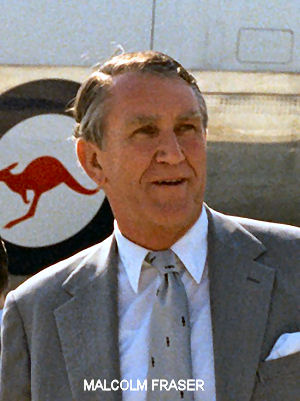 In Whitlam's time foreign investment had been less than 10%, but it increased steadily after 1975. Between 1980 and 1981 there was the "highest capital inflow on record." Much of this was for loans to State governments for infrastructure projects, but after 1980 more and more was borrowed by private firms with an ever greater part going to property development. By 1985-86 services, tourism, real-estate and property development were responsible for over fifty per cent of incoming capital and real-estate was the biggest borrower. [4]

The Australian housing industry continued speculative land development and reliance on high immigration to feed population growth and thus demand, with little central planning. As the economy was opened up to the ideology of free market forces, speculation and housing price inflation increased. However, from 1974-1986 economic recession affected the housing industry. [5]

Government policies assisting home ownership were identified as an impediment to economic growth by, among others, a group that included the Australian Treasury, [6] over which Federal Treasurer Philip Lynch had presided until 1977, when he was sacked for involvement in Victorian land speculation scandals. Land scandals were not confined to Victoria, however. An example of political corruption and land speculation, with the demise of DURD and the Whitlam Government, occurred when the Liberal West Australian Minister for Industrial Development, Sir Charles Court, bailed out property developer, Alan Bond [7] by purchasing a property that Bond had been trying for years to get rezoned but which had been destined, with the co-operation of the previous WA Labor Government, under the Federal department, DURD, to remain a green corridor. Instead of leaving Bond with his unrezoned rural property, Court used DURD funds to purchase the property from Bond. Bond subsequently donated $20,000 to the Liberals' 1977 election campaign. Soon after Sir Charles Court raised $250,000 in a syndicate to finance Bond's America's Cup venture. [8]

The ALP West Australian Government that followed on from the Liberal one was no better. It formed a corrupt network with WA land speculators which was subsequently to be known as "WA Inc." The Premier involved in this was Brian Burke and he was later imprisoned for corruption. [9]

The members of the Australian Treasury group wanted a reduction in all forms of housing assistance. They also called for the freeing up of the housing market to market forces, without interference from subsidies or regulated industry rates. They blamed government regulation for keeping the cost of home ownership unrealistically low, inflating ownership expectations and leading to people owning too many houses. [10]

In response to lobbying, [11] immigration began to climb again from 1979 and remained high until 1982.

As well as dismantling Whitlam's urban and rural development system, the Fraser Government commenced the first of a long series of steps to dismantle the free tertiary education system. It thereby reduced that avenue for Australia to increase its skilled and tertiary educated workforce, leaving industry few options but to import new skilled workers. The structure and finance of the industry meant that support for developing a local system to provide skilled tradesmen remained weak and unorganised. Thus the industry continued its strong reliance on imported skilled labour. As the economy was opened up to the ideology of free market forces, speculation and housing price inflation increased, with strong encouragement from the Australian Treasury.

The section in The Growth Lobby and its Absence on Australia's return to a populationist development and housing policy under the Fraser government illustrates my argument that in countries where a highly profitable property development and residential construction industry dominates, individual firms may be more inclined than government assisted housing systems to access international loans in order to finance continued expansion. Furthermore a deregulated financial environment will assist the strategy of borrowing to finance expansion.

In the end of Chapter 7 and in Chapter 8 of The Growth Lobby and its Absence, I examined evidence for the hypothesis that Australia had followed a cornucopian route and France a Malthusian one after the oil crash. My evidence consisted largely of indicators of policy and practice related to per capita and industrial energy consumption, principally in the building industry and the production of dwellings. I situated these indicators within the context of the different land development and housing systems in Australia and France and showed how the first relied on immigration but the latter did not. I gave evidence that both countries had temporarily reduced immigration at the time of the first oil shock for energy saving and economic reasons, but that the fall of the Whitlam government had brought an end to these politics in Australia and ushered in a high conventional energy using expansionist period with fast population growth. I attributed this growthist course in Australia largely to a populationist lobby in which property developers and residential construction companies were important actors. I explained the ability of France to consolidate its population and energy use to the absence of such a lobby.

There are, however, other possible additional explanations for the difference between immigration policies in France and Australia that have resulted in a higher migration intake in Australia. For example there is, arguably, a stronger ethnic lobby in Australia than in France and this lobby is able to press for extended family reunion. Because Australia has an active immigrant recruitment intake, it is difficult to justify a small humanitarian intake. A multiculturalist approach to new settlers, rather than an integrationist approach may favour the development of ethnic lobbies and the establishment of distinct communities with a variety of motives for expansion. These explanations were not explored in my thesis but that is not to say that they and others have no value. Nevertheless, the evidence pointing to a very important role for the property development lobby in driving immigration was strong in 1998 when I began my thesis, stronger in 2002 when I completed it, and overwhelming in 2014 as I update this excerpt.

Malcolm Fraser’s policies furthered the interests of the Australian property lobby and undermined the capacity of the Australian people to resist it and to self-govern. It seems likely to me that there was interference, in the form of a ‘shock doctrine’ type program that could well have been pushed onto Australia by the CIA, as the Christopher Boyce interview seems to point to and as John Pilger argued in A Secret Country, Vintage, 1992.

This article is based on research and a modified excerpt from Sheila Newman The Growth Lobby and its absence (longer title, The Growth Lobby in Australia and its Absence in France), Swinburne University Research thesis in Environmental Sociology, 2002.
[1] Sandercock, Property, Politics and Urban Planning, Transaction publishers, 1990, p.17.
[2] Ian Manning , “Policies: Past and Present”, Chapter 2, pp10-32, Eds. Ruth Fincher and John Nieuwenhuysen, Australian Poverty: Then and Now, MUP, 1998, p.14 and Whitlam, The Whitlam Government, Viking, 1985, p.404; Leonie Sandercock, Property, Politics and Urban Planning, op.cit., p. 16.
[3] Later to be renamed the Foreign Acquisitions and Takeovers Act (1975)
[4] R.H. Fagan, "Foreign Investment" in Australian Encyclopaedia, Terry Hills, NSW, Australian Geographic, Pty. Ltd, 1995, pp. 1393-1394.
[5] Trevor Sykes describes a wave of property crashes in June 1974 and at the start of 1977 in Trevor Sykes, The Bold Riders, Allen and Unwin, St. Leonards, New South Wales, Australia, 1996 edition, printed 2000, p.267. David Hayward, "The Reluctant Landlord", in Urban Policy and Research, Vol. 14., No.1, 1996, p.23, describes the property recession as lasting from 1975-1986. There were however also small peaks in 1976 and 1982 which coincided with relative peaks in immigration. See my figure 8.1, Chapter 8 and the discussion below it.
[6] Terry Burke, Peter W. Newton, and Mary Ann Wulff, "Australia", International Handbook of Housing Policies and Practices, Ed. Willem van Vliet, Greenwood Press, Connecticut, 1990., pp.722-762: p.728 &732, citing Stone 1979.
[7] Alan Bond migrated to Perth, Australia as a child with his English parents. He began business by property speculation which relied on land rezoning and although he finished up having many other kinds of investments, the basis of his business remained property. He wheeled and dealed for three decades, generally using time payment to deal with huge loans, including one that he floated with Kumagai Gumi. He won the America's cup in 1983, thus earning great popularity for Australia and the public approval of Prime Minister Hawke. He became a multi-millionaire, increasing his fortunes greatly during the 1987-89 period, but underlying this was a 20 fold rise in debt over the last five years and, in 1989 Bond Corporation announced a loss of 980 million, which was the largest in Australia's history to that date. Bond eventually went to prison, but not for very many years. Source: Trevor Sykes, The Bold Riders, op.cit., Chapter Six.
[8] Trevor Sykes, The Bold Riders, op.cit., pp.57-58.
[9] Ibid., pp.58-141.
[10] "The push of the group [Stone writes about], including the Australian Treasury, was for a reduction in assistance for housing generally and an opening up of the housing market to market forces unfettered by subsidies or regulated interest rates that artificially lower the cost of home ownership, raise ownership expectations, and encourage overconsumption of housing." Terry Burke, Peter W. Newton, and Mary Ann Wulff, "Australia", International Handbook of Housing Policies and Practices, op.cit., pp.722-762: p.728 &732, citing Stone 1979.
[11] Birrell and Birrell, An Issue of People, Longman Cheshire, 1987, pp.236-237. Criteria for skilled immigrants were made easier to meet in unilateral decisions made by the Department of Immigration without consulting the Department of Employment. Birrell and Birrell describe the Department of Immigration as actively supporting the immigration lobby. They describe this lobby as being made up of "well-organized, financed, and articulate industry associations and companies, and vocal ethnic associations who can claim to represent and perhaps to influence the voting intentions of significant numbers of citizens."