I don’t have kids but I am disturbed about the Heart Foundation’s Active Healthy Kids very poor report card for Australian children last week. It said that Australian children are largely unfit because of a lack of exercise and that this deterioration has happened in the last couple of decades. Natasha Schranz author of the Foundation's inaugural report has graded Australian children at a disgraceful D minus. Contributing to this terrble score was a D for "active transport", meaning not nearly enough walking or bicycle riding to and from school. 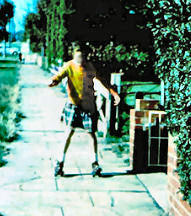 Prisoners of chair and screen

81 % of Australian children do not get the required 60 minutes of physical exercise per day. 26% are not involved in organised sport, 71% are too sedentary, Discussion in the media focused on the seduction of screens such as tablets, computers television and phones. As an adult , I know how screen activities can sap the time in which one could be outside in the sunshine exercising, however there is more to this than the wonders and availability of very attractive technology.

Deprived of open space and adventure

A generation ago and before that, there was a lot more open space which enticed children outdoors when they were not in school. Incidental activity, exploring interesting places in nature or in the local neighbourhood is not just beneficial but essential to children in developing their imaginations, experiencing and dealing with unpredictable situations without rules and the directions and supervision of an adult. This used to be easy to access in the street, in vacant land, parks and the private backyard and friends backyards. There was plenty of space to explore in the suburbs.

There is a huge difference between sitting on the couch in front of a screen from 4- 6.30pm and actively playing in the local environment. It is not necessary to have a strenuous game of basketball for the body and mind to register a level of exercise and a 3 dimensional experience . Furthermore sitting is supposed be the most unhealthy thing to do for hours on end and it makes you fat! For that reason I will not make this a very long article.

The push to make our cities more crowded by increasing the population very fast, densifying suburbs and removing private space including backyards is not going to help this terrible situation with the health of Australia’s children. It has to make it worse. Our politicians show no care at all for the welfare of Australia’s citizens. I understand that many of Melbourne’s’ private schools have built all over their playing fields and now have to bus their students to public areas to play sport. I suppose the children just sit during lunch hour because with no sports areas they could not spontaneously start a ball game.

It’s unnatural, anyway for children to sit all day at desks listening to teachers and severing all their avenues of expressing themselves physically adds insult to injury.

A child living in an apartment, will naturally turn to his/her tablet or phone for entertainment if the only outside alternative is a concrete balcony. A trompe l'eouil on the back wall of the 2x3 metre couryard, however far it backons cannot acccommodate the need of a child to run. We have not made Australia better over the past 50 years. The "age of entitlement is over" and for what? What really have we gained as a society?

Two generations ago, we had a nation very well represented in international sport partly because, I believe most children had a chance at participating even if it was just making a “100 in the backyard at Mum’s” or hitting a tennis ball on a broken -down asphalt court, but now it seems we have a generation of unfit young people unlikely to live as long as their parents. The social engineers and economists are always complaining about the aging population but if people start dying younger, the achievement of longer life expectancy will be just a nostalgic memory.