A frank discussion about the consequences of Merkel's open borders on Denmark, with a number of references to the Australian system for processing refugees. Note, however, that refugees do not usually achieve permanent resettlement in Europe, whereas they usually do in Australia. When European governments talk about taking in refugees, they are talking about a temporary situation. In this interview Oksana Boyko of RT asks Ft. Anders Vistisen about the Danish plan to confiscate valuables from refugee applicants to pay for their costs and how many more refugees can Denmark accept. Why is Denmark moving refugees to rural camps? Won't that detract from their integration?

You stay, you pay Ft. Anders Vistisen, Danish member of the European Parliament

"As spring approaches, refugee flows from the Middle East into Europe are expected to intensify, putting Europe in a race against time to get a handle on the refugee challenge. Is a collective solution still possible or will EU members have to go their separate ways? To discuss that, Oksana is joined by Anders Vistisen, a Danish member of the European Parliament." (Introduction to program.)

Fourteen activists from the hardline animal rights group Sea Shepherd, including an Australian, were arrested in Denmark’s Faroe Islands while trying to halt a dolphin "hunt".

Rather than a "hunt", the animals were help captive and were callously slaughtered without escape. They were arrested on the island of Sandoy while attempting to save a pod of 33 pilot whales — members of the dolphin family — which were being driven toward shore to be slaughtered. Islanders drive pilot whales and other dolphins into shallow bays, where the animals are butchered to the cheers of locals watching from shore. This is justified coldly as "tradition"!

Among them was Krystal Keynes, from Western Australia.

Faroese whalers support the atrocity of mass killings of whales by claiming that whaling in the Faroes stretches back to the earliest Norse settlements more than 1,000 years ago, and hunts date to at least the 16th century. The method of slaughter involves the whales being forced into a bay by flotillas of small boats before being hacked to death with hooks and knives! Many locals defend the hunt as a cultural right, but animal rights campaigners have denounced it as a "brutal and archaic mass slaughter".

Sea Shepherd has denounced the hunt as brutal and archaic, and this year brought celebrities to the North Atlantic islands to cast a spotlight on the practice. 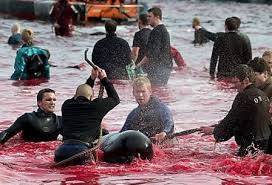 A tradition of atrocities does not justify them! Back in the past, animals were thought to have no value as they were soul-less. Our understanding of animal physiology and ecology has made us wiser and more knowledgeable in the 21st century.

Dog fighting, bear baiting, slavery, child prostitution and sending children down the mines are no longer part of Western culture because these practices offend our morals. However, in this case, sensitivities, empathy, awareness and morals have been brushed aside, and the activists - the whistle-blowers - have been arrested - for the cause of preserving "tradition"! What other Norse atrocities do the Danish continue to cherish because they were done in the past?

Hollywood star Charlie Sheen has criticised Danish authorities over the arrests of 14 anti-whaling activists, including an Australian, in the North Atlantic. He generously donated one of three inflatable boats used by Krystal Keynes and other Sea Shepherd members to try to save a pod of 33 pilot whales being driven toward hunters on the Faroe island of Sandoy.

18th Century Anglo-Irish statesman, author, orator, political theorist, and philosopher Edmund Burke said, “The only thing necessary for the triumph of evil is for good men to do nothing.” Sometimes evil proceeds anyway, because of hardened and cruel hearts!