What's wrong with the Canadian Environmental Movement? Why don't Canadian environmental organisations protest about the huge impact of successive government's policies to promote mass immigration to Canada? The six million more people imported to Canada since 1991 would account for four times as much GHG emissions as the Alberta tar sands project. Overpopulation is the number one issue that multiplies every other impact. Why is this message of the original promoter of Earth Day forgotten today? 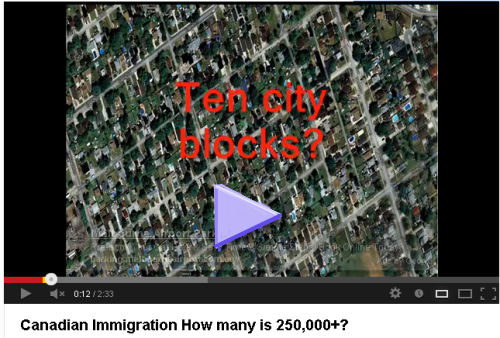 Questions for the environmental movement on Earth Day: Do you think adding these many people (250,000+) to Canada every year has no impact on the environment? Is that why you remain silent about it? Or is the money you get from corporations like RBC, TD Bank and the Van City mortgage empire (the latter two, donors to the BC Sierra Club)? More people, more home building, more loans, more cheap labour!

And the real influx is much higher than this, including those here on "temporary" visas who forget to leave. Real figure: somewhere between 4-500,000 per year. That is one Mississauga worth of consumers added to our numbers each year, year after year after year. Mind-boggling.

1991 - Kyoto and the start of Mulroney/McDougal mass immigration push

1991 was the year that the Kyoto accord was signed. It was also the year that Brian Mulroney and his Immigration Minister, Barbara McDougall, began the era of hyper-immigration so that, according to McDougall's reasoning, the Conservatives could lure ethnic voters away from the Liberal Party (Hey, it finally worked!). Since then, Canada has gained more than 6 million extra people that otherwise would not be here. Those six million people have been responsible for FOUR times as much GHG emissions as the Alberta tar sands project and FOUR times as much land despoilation. Not boreal forest, but largely prime Class 1 farmland. Mass immigration has been the biggest ecological disaster of the last twenty years of Canadian history. More than any pipeline, more than any mining project, and certainly more than our nuclear industry, the most inflated of all boogeymen on the landscape. Mass immigration is definitely not, as Elizabeth May said, a 'trivial' issue.

About Immigration, not Immigrants ...

This is about immigration, not immigrants. "While immigrants did not invent our profligate lifestyle, they nevertheless aspire to it, as our parents, grandparents or great grandparents once did in coming here. Improving one’s lot is, after all, is the major and fully understandable motive for those who choose to settle here. The point is not to blame immigrants but to cite immigration as the major driver of population growth, which, contrary to green perceptions, has a demonstrably negative impact on our environment. " http://candobetter.net/node/2254 Each of us are part of the problem, but increasing our numbers cannot be a solution. In fact, radically reducing our existing population level is essential to our survival. Ask the scientists. Ask Canadian scientists like Dr. Michael Healey, or Dr. David Schindler, or Dr. David Hughes of Cortes Island. We should aim for a national population level of half, or less than half, of what we presently have. We must return immigration intakes to sane levels, stop rewarding people for having children, encourage adoption and discourage IVF treatments. Instead, we are growing leaps and bounds while the environmental movement stands mute.

A second question therefore arises. Why hasn't the environmental movement demanded an environmental review panel process for the policy of mass immigration? Why are there not people lined up at the microphone in hearings across the country demanding that an environmental assessment be done for a policy that has made Canada the leader in population growth among G8 countries? Why? Why? Why?

Is it political correctness? Cowardice? Wilful blindness? Stupidity? Or a mercenary quest to keep corporate funding, funding which Big Green Inc. is careful to try to hide from its grassroots membership? Why do the members of these corrupt behemoths lack the diligence and the integrity to scrutinize the books of their beloved green champions and ask the appropriate questions? Question like "Why is my organization accepting money from big corporations and big banks? What do we have do in return for that money? What does RBC, the TD Bank and Encana Corp, for example, want from Big Green? Why is the grass roots membership content to rely upon the filtered information of their trusted Club representatives rather than do their own research? How can they remain ignorant of the foundational formula of the environmental movement, the IPAT equation?

(1) Earth Day was founded by the late Gaylord Nelson in 1970. Nelson was a U.S. Democratic Senator and Wisconsin Governor.

(3) He was the author of the U.S. Wilderness Act, numerous other environmental bills, and an inspiration for many more. He was a forceful leader in attempting to convince environmental organizations that they could never achieve their long-term goals unless the US achieved population stabilization through immigration reduction.

(4) On Earth Day’s 30th anniversary in 2000, Nelson said : “Population, global warming and sustainability would be my suggestions for the three most urgent environmental challenges…. Stabilizing U.S. population is a challenge that could be resolved in a relatively short period resulting in significant economic and environmental benefits. At the current rate of population growth, the population of the US will (rise)… to some 530 million within the next 65 to 70 years. If that happens, the negative consequences will be substantial if not, indeed, disastrous. To stabilize our population would require a dramatic reduction in our immigration rate….

(5) “The hard fact is that while the population is booming here and round the world, the resource base that sustains the economy is rapidly dwindling. It is not just a problem in faraway lands, it is an urgent, indeed, a critical problem here at home right now. We are talking about deforestation, aquifer depletion, air pollution, water pollution, and depletion of fisheries, urbanization of farmland, soil erosion and much more…

(6) “The bigger the population gets, the more serious the problems become…. We have to address the population issue. The United Nations, with the US supporting it, took the position in Cairo in 1994 that every country was responsible for stabilizing its own population. It can be done. But in this country, it’s phony to say ‘I’m for the environment but not for limiting immigration.’ “

(7) To those economists whose only concern is maximizing GDP, thereby disregarding environmental concerns, Nelson would thunder that, “These people refuse to recognize that the economy is the wholly owned subsidiary of the environment.” If the environment collapses, so will the economy which depends on it.

(8) Gaylord Nelson's name is largely ignored and his message has been downplayed and betrayed by most environmental organizations, our media and our governments. To many of these people, environmentalism has been trivialized to recycling toilet paper rolls while the roof of the world falls on their heads.
Dan Murray
April 22, 2013

I just saw Canadian Liberal Opposition Leader Stephan Dion in an interview extol his vision of carbon taxes that would shift the burden from income to those activities that were hurting the environment. He didn’t mention activities like being an MP who would vote for merely a freeze in the expansion of the tar sands developments in Alberta or in his words a plan to make it “green”. Nor did he mention activities like being an MP who would vote for a 38% increase in the number of immigrants who would enter this country and thereby dump more than 2 million extra metric tonnes of green house gasses into the atmosphere than Harper’s immigration totals have done. It is a dirty secret in Canadian discourse that each of us, on average, emits 23 metric tonnes of GHG, and that more of us that there are, the bigger problem we have. The environment doesn’t care about per capitas. Only totals.By all means let’s become more technologically efficient. But it doesn’t mean a damn thing if we keep growing. And those who boast the loudest about carbon taxes or scream murder the most about the tar sands are like the barkers at a carnival. They have a shell game going and they are trying to take our attention away from the fact that the immigration “pea” is not even on the table The catastrophic impact of immigration on climate change, biodiversity loss, the loss of prime farmland is not even on Mr. Dion’s radar screen, or indeed that of any Canadian politician. And the well documented negative economic consequences haven’t even dented their consciousness either. If the Economic Council of Canada, the C.D. Howe Institute, the Grubel report of 2002, and the former Director General of the Canadian Immigration Service, James Bissett, couldn’t make an impression, no one can. No one can argue with $24 billion of Albertan tar sands oil money or the money that demands a pool of cheap labour in this country. Money that has increased the labour pool by 13% from 1990 to 2006 while succeeding in driving the wages of educated workers down by 7% , according to Stats Can (May 07). Mission accomplished. As Samuel Gompers said almost a century ago, immigration is, fundamentally a labour issue. Unfortunately, its consequences are environmental and global in scope. Each immigrant to North America on his arrival, not counting his children, quadruples his greenhouse emissions. Opening our “heart” to him, is not only closing our heart to the workers whose wages he suppresses, but to the entire global population, which suffers an accelerated pace of global warming from our population increase. A “Carbon Tax” is a trivial fig leaf to disguise an open borders immigration policy that serves a globalist corporate agenda that will kill this planet or more accurately, 25% to 50% of the species that currently dwell in it. Including the one that is engineering it--us. It looks very much like, upon closer scrutiny, that Mr. Dion’s “GREEN SHIFT” is in reality at best a shift into neutral. Footnotes: 1. The Conservative Government accepted about 251,000 immigrants in 2007, but only 240,000 actually entered the country. The three opposition parties have all pledged to aim for a “1%” immigration target. That is, one percent of Canada’s current population. Currently that would be 330,000. Thus the Liberals would aim for 90,000 more than came last year, and even more if their Immigration critic is to be believed. Actually 429,000 residents settled in the country last year, when temporary visa entrants are counted. Most never leave. The gap between the parties is substantial. Each resident of Canada emits 23 metric tonnes of GHG on average (Stats Can). Therefore the opposition’s Greenhouse Hypocrisy Total is more 2 million metric tonnes of GHG above the Harper governments. Immigration has ecological consequences. 2. The Grubel Report can be found in the archive of the Fraser Institue. Dr. Herbert Grubel’s 12 year study of 1990-2002 concluded that immigration cost Canadian taxpayers $18.3 billion more in taxes than it recovered in tax revenue. 3. Estimates of the number of species who will succumb to global warming in the next four decades range between 25% to 50%, with more casualties occurring closer to the equator.