"I am Ukrainian Armed Forces Major General Aleksandr Kolomiyets. My latest posts are chief analyst of the Ukrainian armed forces, assistant to the Ukrainian defense minister," the man said at a news conference at the Donetsk news agency loyal to the self-proclaimed republic. Kolomiyets had also spent 19 years as the chief enlistment officer in the Donetsk region.

The speech in the 1:05 minute video above unfortunately, has no English text included.

"I am going to work for the good of the Donetsk People's Republic," Kolomiyets (not to be confused with oligarch Igor Kolomoysky) announced.

The defector says he took his family out of the Ukrainian capital, fearing repercussions from officials.

He also claims a lot of people in the Ukrainian military want to switch to the self-proclaimed republics' side, including officers. According to Kolomiyets, hundreds have already abandoned Kiev.

"Look at who is actually fighting. Only the volunteers from nationalist squads," the defector said at the news conference.

There is growing dissatisfaction with the commanders, Kolomiyets said. "Soon, there is going to be unrest within the military. They do not understand the orders they are given, to kill civilians. We are going to see that by autumn, everything will change."

He added that morale is very low in the Ukrainian army: "All the officers, the generals that understand the criminal nature of the authorities' actions, do not want to fight."

Meanwhile, the press secretary of Ukraine's General Staff has told Ukrainskaya Pravda newspaper that Kolomiyets was fired from the army in 2012 due to incompetence. "He could not handle the post of the army's top analyst," the newspaper quoted the press secretary as saying. "Besides, he traveled to Russia as a private [individual]. Military men are supposed to inform their commanders about such visits, but he broke the rules." 1 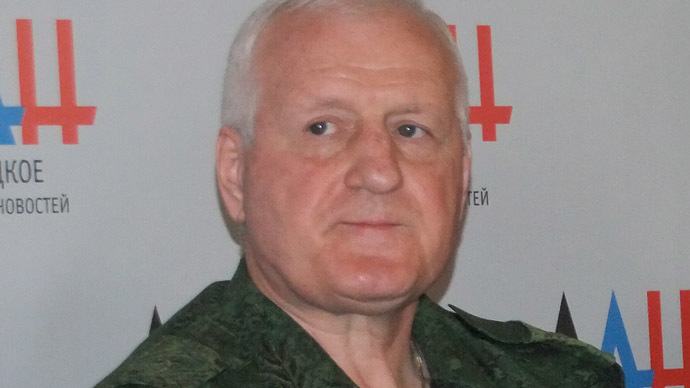 Aleksandr Kolomiyets, claiming to be a major general of the Ukrainian army, speaking
at a news conference at the Donetsk news agency. (RIA Novosti/Igor Maslov)

Kolomiyets, if it is him, is not the first Ukrainian official to have switched sides in the conflict that has been tearing the country apart for over a year now. Previous defections include the head of the Lugansk customs office, an officer of the Ukrainian foreign intelligence office and a member of staff of the Ukrainian embassy in France.

Footnote not in the original article.

#fn1" id="fn1">1.#txt1"> ↑  The quoted words of the press secretary of Ukraine's General Staff seem self-contradictory. If Aleksandr Kolomyets had been sacked in 2012, then he was a private individual when he travelled to Russia. How could they have expected him to "inform [his] commander about such [a] visit?"