I have had my car modified so that it cannot exceed 40kmh. The story that led up to my decision to cauterise my means of transport in this way is that I found I cannot afford to drive on Victorian roads unless I have some sort of protection against expensive fines for exceeding by a small margin often seemingly arbitrary speed limits. 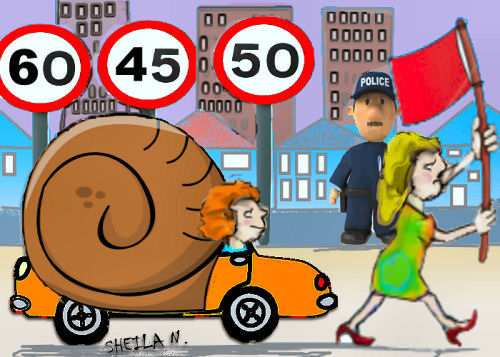 I consider that I drive normally around the streets and roads of Melbourne with the occasional sortie into the country. I am ever vigilant about speed signs and aware of cameras lurking, ready report any inadvertent misdemeanors to the money crunching accountant authorities, who are ever- ready to extract a day’s hard earned from my coffers.

In Melbourne the speed signs change at frequent intervals from 60kmh to 50kmh , 60kmh to 40kmh, 40kmh to 60kmh again etc. A frequently encountered speed sign is 40kmh around school during school times. One always has to reflect: Is it school holidays? Is it school hours? What time is it? All in a second or two.

I normally slow down anyway while these questions go through my mind. After the highlight of the school crossing, there is never any demarcation at the end of the 40kmh zone, so I drive at 40kmh until I see the next 60kmh sign. The cars behind me bank up but if the last sign I saw was 40kmh then surely I must go at 40kmh until I am instructed otherwise?

What really decided me on the major modification to the engine of my car which was capable of maybe 140kmh was the story of a friend who had gathered a few demerit points for minor speeding infringements- for 57kmh in a 50kmh or 46kmh in a 40kmh zone. She wasn’t actually driving fast! As we all know, even if one is using cruse control, the speed can vary according to the road surface. So despite your best efforts you can momentarily go above what you intended and if you are caught by a camera in that instant you pay the price. If traffic were policed by real police who did not have quotas to fill, then their discretion might bring about a fairer result in terms of making the punishment fit the crime.

The story is that my friend thought that the number of demerit points she had accumulated still allowed her to drive. She had no notification otherwise, but was recently pulled up by the police whilst driving and told she had exceeded the demerit points limit and was driving effectively un licensed. She tells me she also has a $6,000 fine for her efforts in mainly trying to get to work where $6000 would represent about 3 weeks’ work.

I’m pleased though that now I am permanently protected from the extortion of “speeding” fines and demerit points as I just can’t physically speed any more! It is a little inconvenient as I have to set out very early now for any assignation. In fact I had better stop writing this very soon as I have an appointment four suburbs away at 3.00pm and its getting on for 10.00a.m. I think of my car now, not so much as a means of transport but as I sort of shopping cart. I could really walk to most of the places I go faster than I could drive when all the obstacles as well as the speed are taken into account but it is good to be able to throw the shopping into the boot and carry wet weather gear in the back seat.

Melbourne was not always like this. Once you could more or less drive at what you considered a safe speed, most of the time and you would be right. With major, ongoing increases in population and traffic, regulations abound. I do not expect driving in Melbourne to be fun any more, but I’m pleased I’ve found a way to survive from the legal point of view on Melbourne’s roads.

I have seen speed limit sign of 30kmh on odd occasions, but I opted for the limit on my car ..er shopping cart to be 40kmh as I am actually a bit of a risk taker underneath it all.