(This article by Harrison Koehli was originally published at http://www.sott.net/article/300756-Russian-boots-on-the-ground-in-Syria-Middle-East-mayhem-intensifies on Fri, 28 Aug 2015.) Last month, in a task almost as difficult as Diogenes' search for one honest man, the U.S. allegedly found a staggering 60 'moderate rebels' in Syria to train in its interventionist program to oust Syrian president Bashar Al-Assad 'war against the Islamist terrorists'. This crack team of 'moderate' fighters, trained by the U.S. amid thousands of similarly-motivated terrorists of the Islamic State/al-Nusra/Free Syrian Army variety, demonstrated their valor by immediately refusing to fight Al-Qaeda-affiliated al-Nusra Front in Syria, a dangerous hesitation because they were subsequently attacked by al-Nusra fighters anyway. 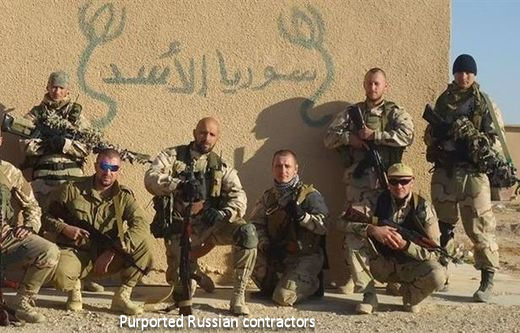 As news of the group's uselessness reached Washington at the beginning of August, Obama then pledged airstrikes in Syria to defend said 'rebels', even from 'attacks' carried out by the legitimate authorities in Syria. The airstrikes began a couple weeks ago, launched from NATO bases in Turkey, thus opening a second front of air raids against Syria from the north, following over a year of NATO airstrikes from Iraq 'against Islamic State targets' in both Iraq and Syria's southern flanks. The massive bomb attack in late July at a Kurdish political youth meeting in Suruc, southern Turkey - allegedly carried out by 'ISIS' from Syria - the day before the Turkish air force joined in US bombing raids against targets in northern Syria, is also extremely suspect. I think we can reasonably suggest that internal political opponents were targeted by Erdogan's neo-Ottomanist regime, and their deaths used to justify cross-border air raids against Kurds in northern Syria.

Turkey's perfidy in all this needs to be underscored. Syria-based analyst Thierry Meyssan reckons the Russian alternative gas pipeline route to Mediterranean Europe - 'Turkish Stream', signed between Putin and Erdogan last December - is dead in the water. Indeed, Gazprom suspended related construction contracts in early July, before halving the gas transit capacity slated in the original deal. Turkey's official stance regarding Crimea's secession to Russia is that it "will never recognize Russia's annexation." Ankara has also been dangling massive loans to the Kiev regime and hosting a Crimean Tatar lobby group convention, attended by Kiev's foreign minister, and calling for Russia to 'return Crimea to Ukraine'.

In a saner world, there would be no confusion as to what is going on in and around Syria because the military intervention there would be called what it is. When one country (and its allies) trains a group of fighters in another country under the pretext of preventing marauding terrorists in that country from spreading to other countries, but really to take down the government of said country, then it is an aggressive act by the forces of one state against another. Just because the U.S. says it is justified in 'self-defending' their foreign-trained subversive group from Syria's legitimate self-defense, does not make it so. To paraphrase John Kerry, you can't just attack a country's military on a trumped-up pretext... Well, actually, you can: the U.S. does it all the time.

With typically diplomatic understatement, Russian Foreign Minister Lavrov called Washington's plan "counterproductive." He reasonably pointed out the humanitarian disaster in Syria - caused by the US/NATO intervention - and called for "an immediate end to external intervention" in the crisis. In contrast, White House spokesman Josh Earnest, with typical American bluster and arrogance, said Syria "should not interfere" with the U.S.-trained 'rebel' operations, and threatened "additional steps" would be taken to "defend them".

Despite many months of airstrikes - ostensibly targeting ISIS in Iraq - the marauding bands of mercenaries are apparently as numerous as ever. Not only are the airstrikes killing hundreds of civilians, they are turning locals against the U.S., whom they see as acting with questionable motives. In other words, many are joining ISIS in response to yet more American atrocities in the region. The case can be made, of course, that that serves U.S. interests just fine. The more ISIS fighters they have to fight, the more justified their case for further military intervention; more airstrikes, more carnage, and the chance that maybe, just, maybe, they'll actually succeed in their plans to oust Assad and keep Iran and Hezbollah on a tight leash.

In the meantime, Russia continues doing what it does best: establishing mutually beneficial economic ties with other sovereign nations (instead of working to destabilize them through destruction and murder), attempting to solve problems with diplomacy, and proposing military strategies that respect said nations' sovereignty.

In 2007, Russia signed a deal with Iran to supply S-300 long-range, defensive, surface-to-air missile systems. In 2010, Russia reneged on the agreement, voluntarily embargoing the sale in line with an international (read: U.S.) ban on selling weapons to Iran. Iran filed a lawsuit in response, but the recent 'nuclear' deal, in which Russia played an integral role, has changed the situation. Russia and Iran have now ironed out all but minor technical details, and Iran should see delivery of the S-300s by the end of the year.

The net result of all the violence we've seen in the Middle East since 9/11 to contain Iran - and keep Russia out of the region - is that the two countries have gotten closer. The two nations' respective foreign ministers met recently and stated their united position regarding Syria, warning against any external attempts to dictate a 'resolution'. They also made plans to expand trade, including the possibility of Iran acquiring Russian-built nuclear reactors. 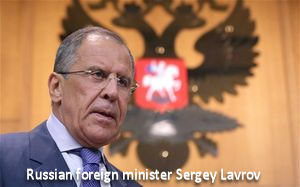 There is similar news out of Egypt: Putin's recent meeting with President al-Sisi saw the Egyptian government supporting Russia's plan to create a real anti-ISIS coalition made up of the forces actually fighting ISIS: the Iraqis, the Syrians, and the Kurds - who have all done a better job than the U.S.-trained 'rebels' and the ineffectual and counterproductive airstrikes (and airdrops). In addition, Egypt hopes to find itself included in the Eurasian Economic Union (EAEU) free trade zone in the near future, eschewing the high-and-mighty U.S. dollar by facilitating trade between Egypt and Russia in their respective currencies. The sanctions against Russia have benefited Egypt nicely, opening opportunities for increased food trade. Oh, and Egypt too is looking forward to some Russian-built nuclear power plants. The 'reality-creators' in Washington must be very pleased that their anti-Russian sanctions campaign has been so 'successful': it just keeps making Russia more friends, who then support policies that work toward results the anti-Russian sanctions were designed to prevent in the first place!

And now it looks like Russia is moving beyond diplomacy and trade deals to directly support Syria directly in its fight against foreign-backed terrorists destroying the country piece by piece. A Syrian newspaper, Al-Watan, said yesterday that many Russian "military advisors have reached Damascus" in recent weeks, and that Russia has begun supplying Damascus with satellite imagery. Rumor has it (from the opposition-linked Syria Forum's AlSouria.net) that "a Russian technical crew had been scrambled to the outskirts of Latakia ... to bolster the regime's defensive lines as the Islamist Army of Conquest in the nearby Al-Ghab plain threaten to advance on Alawite population centers," and that advisors have proposed to build a military base there.

Al-Watan also reported that the advisors "have set about gathering a large amount of information that will make it possible to study the potential deployment of international forces under the patronage of the United Nations," adding that the Kremlin "will study the potential launch of a separate Russian operation as well as another joint [operation] with the Collective Security Treaty Organization, which will convene in Tajikistan's [capital city] Dushanbe on September 15."

Shortly after the U.S. decision on August 4th to 'defend' its rebels by bombing Syria, the head of Russia's Airborne Troops, Colonel General Vladimir Shamanov, stated that he was willing to deploy elite counter-terror forces on missions in Syria. Dmitry Peskov, Putin's press secretary, denied that Damascus had asked for troops. Perhaps Col. Gen. Shamanov's statement was a message of Russia's willingness to comply should Damascus ask? After all, Russia has been supplying financial and diplomatic support to Damascus since the regime change operation started in 2011, and just recently signed an agreement to provide advanced MiG-29M and MiG-31 fighter jets to Syria's Air Force.

In an interview with Lebanese al-Manar TV last Tuesday, President al-Assad had this to say:

The President asserted that Russia doesn't support individuals or a specific president, saying that this would be unacceptable and would constitute interference in internal affairs; rather Russia supports specific principles, which are the sovereignty of state and people.

"We have great trust in the Russians, and they proved throughout this crisis since four years ago that they are honest and transparent with us in relations and that they are principled. These are important points. So, when they meet various sides, we don't feel concern that these sides might distort the true image for the Russians. The Russians have close relations with Syria and are capable of finding out about all that is happening accurately. We believe the goal of the Russians is to bring political sides towards dialogue to cut off calls for war.

"This is the goal, but in the end there won't be an agreement over anything unless we Syrians sit with each other and hold dialogue with each other. It won't be the Russians who impose any solution, so we encourage them to meet all forces and we are relieved when a Russian official meets any figure, without exception."

Whatever happens, it doesn't look like Russia will back down from its fidelity to the principles of sovereignty and international cooperation. Whatever hare-brained insanity the West comes up with - whether directly against Russia, or by proxy in Ukraine, or elsewhere in the Middle East, the Caucasus, or Central Asia - Russia has thus far responded elegantly and reasonably. Like a six-year-old trapped by its own contradictory set of lies, the West is in a bind when it comes to Syria and ISIS (not to mention Ukraine). They can't reasonably keep up the pretense that they want to destroy ISIS while denying Russia's proposal to create a real coalition of those nations actually suffering from ISIS's depravity. Something's gotta give.

Harrison Koehli hails from Edmonton, Alberta. A graduate of studies in music performance, Harrison is also an editor for Red Pill Press and has been interviewed on several North American radio shows in recognition of his contributions to advancing the study of ponerology. In addition to music and books, Harrison enjoys tobacco and bacon (often at the same time) and dislikes cell phones, vegetables, and fascists