The photograph to the left is of a young Syrian boy at his father's funeral. He saluted those present and gave a defiant and hope-filled speech in memory of his father, a soldier in the Syrian Arab Army. This article is composed of reports from two members of an international peace delegation led by Mairead McGuire, and hosted by Mother Agnes Mariam. This article is written by Shrikant Ramdas, one of the members of the delegation. 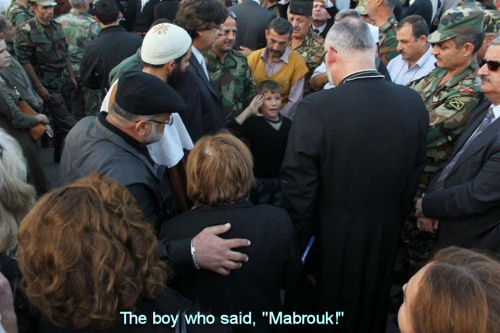 Andrew Ashdown, an Anglican priest who was also on the delegation to Syria, wrote about a soldier's funeral he attended in Tartous.

It is hard to describe the emotion of what happened in Tartous. We had planned to visit a hospital. We learned that 22 bodies of soldiers were being returned home. The corpses were those of [Syrian Arab Army] soldiers that died in the siege of the Kuwairis Airport, Eastern Aleppo, and were buried there because of the siege. Some volunteers were able to finally bring the bodies back to their families, which coincided with the time of our visit. Hundreds had gathered. There was intense emotion as the coffins were loaded off a lorry, to the piercing cries of grieving relatives. We joined the crowds giving condolences to families who seemed to genuinely appreciate our presence.

Suddenly a young boy of about 10, whose father's body was being returned, and was standing next to his crying mother and a Sheikh, stood to attention in front of us, saluted and with tears flowing, gave a deeply moving speech.

One of the monks with me told us that in what he said there was not one word of anger, hatred or violence. His words :

"My father is a blessing to this country. He has given his life so that we may live in peace. But he is not dead. He is a martyr. And I honour him. Mabrouk! Mabrouk! ! [1] He will live, and because of him Syria will have peace."

I stood to attention looking straight at him with the crowds around looking on and letting him finish. I then saluted him before giving him a short blessing, and a few moments later, a hug. The Sheikh next to him hugged me also. None of us could hold back our tears. It was an experience we shall never forget. The sheer courage, determination, hope and cry for peace in the midst of grief puts all those who bang the drums of war to shame…

It was by chance that I joined the international peace delegation led by Mairead McGuire, and hosted by Mother Agnes, to go to Syria in November 2015 during a most testing period for its people. As someone who is neither a journalist nor an activist, but rather an 'observer' with a deep desire for peace, it was saddening to see another country plunged into war by outside forces. We have seen this pattern repeatedly: Iraq, Afghanistan, Ukraine, Yemen even now, and countless other places, and I often felt helpless as a concerned and proud citizen of another country as to why this happens and what anyone can do. One option, a difficult one for most, is to see for oneself, and what I observed during my visit was too many emotions to adequately and justly describe what the people of Syria have been and are going through.

The people we met were across different faiths and walks of life. Few were under the illusion that their popularly elected and, indeed, generally popular leader, was perfect, yet most admired him. But even a smaller section of society who at one time may have opposed with genuine concerns had understood - this was a time to unite and defend their land and for this, they did come together to defend their little towns and cities, guarding their churches, their mosques, their schools, their children, their heritage. I developed a deep respect for them very quickly; I was sure if there was a Hindu or Buddhist or Jain temple or a Sikh Gurudwara, they would guard that too with their lives, such is their respect for humanity, such is their character.

During our visit, one of the many striking things even in their hardship and grief was how appreciative the average Syrian man, woman and child were for our presence. As a Hindu from India, I was touched by the sheer hospitality and the kind words they had for my land, even in these most trying of times. I too conveyed my deep appreciation and told them the world was awakening slowly, and hopefully more will, to their plight, their bravery, and this injustice. It is hard to pick a story among many worthy stories, but certainly "The Boy who said Mabrouk" [See at the beginning of this article] to his martyred father upon receipt of his remains, a father who may have prepared his child for this sad outcome, will never leave any of us.

I remember meeting young men and women not yet out of their teens, and telling them that I will return soon, just to check if they are ok, and that I expect they will have fulfilling lives and that they must keep the faith. The people of Syria are proud and beautiful representatives of the forces of good, and I will pray that they overcome the dark forces from outside and the few misled within who have turned yet another proud nation and people into a war-ground in the geo-political landscape controlled by the western global elite and their allies in the Middle East. To be overrun and to valiantly fight back, one can only salute not just the bravery but the resilience of the Syrian people. My biggest hope is that this ends soon, that the people of Syria survive and live in a way that many of us take for granted: a life of family, of love, of cooperation, in a society and land that had and hopefully will go back to what it was, a beautiful nation of many cultures living together in happiness and mutual respect. In my language, Syria or Sooriya as it is pronounced in Arabic, sounds similar to Surya, which means the sun, and my hope is this land will shine brightly, soon.

[1] "Mabrouk" is an arab term meaning, "Congratulations" or "Blessed".