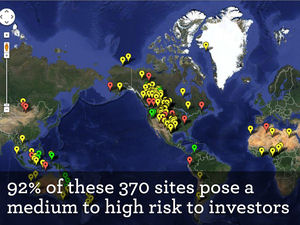 First Peoples Worldwide released its Indigenous Rights Risk Report at the The SRI Conference on Sustainable, Responsible, Impact Investing. The report analyzed 52 U.S.-based extractive companies listed on the Russell 1000® Index and assessed 370 oil, gas and mining sites located on or near Indigenous Peoples land. The results are eye opening. 92% of the sites posed a medium to high risk to shareholders. This is concerning given that only 5 of the 52 companies had an Indigenous Peoples policy for productively engaging Indigenous communities, leaving shareholders exposed to considerable risk. You can view the full report online at www.firstpeoples.org/indigenous-rights-risk-report.

One of the companies First Peoples assessed was Southwestern Energy, which on October 6, 2013, a stock analysts said: “looks like a great long-term investment” and “it is a low political risk company.” Less than two weeks later, on October 17th, the Royal Canadian Mounted Police (RCMP) arrested about 40 Elsipogtog and Mi’kmaq First Nations tribal members and activists, using rubber bullets and pepper spray. The protestors had been blockading the road to SWN Resources Canada, a subsidiary of Southwestern Energy, since June. Southwestern Energy had requested "a permanent injunction to prevent protests against its bid to explore for gas," claiming the blockade was costing them $60,000 a day. However, the injunction was denied on October 22nd. There is no timetable for when the blockade and Southwestern Energy's losses will end.

Given this rosy stock forecast in the face of these troubling events, are traditional approaches to assessing the risk of oil, gas, and mining operations located on or near Indigenous Peoples land relevant anymore? First Peoples does not think so and has proposed a new risk assessment tool in its new Indigenous Rights Risk Report.

In the report, First Peoples rated the above-mentioned Southwestern Energy site a "High" risk. "Traditional financial analysis is no longer enough to predict the risk of an oil, gas or mineral site that is on or near Indigenous land," says Nick Pelosi, First Peoples' Corporate Engagement Associate. "The risk of not respecting Indigenous Peoples' rights must be considered for an accurate risk assessment."

Southwestern Energy is not alone. Nearly all of the companies in the study had a medium to high-risk profile. Of the companies that had over ten sites operating on or near Indigenous land (25 percent of our sample), 92 percent had at least one high-risk site and 23 percent had over five high-risk sites. Take into consideration that only 5 of those companies have an Indigenous Peoples policy, the vast majority of companies are flying blind when it comes to operating on Indigenous land, thus exposing their investors and shareholders to incredible risk.

The risk of not respecting Indigenous Peoples' rights is only going to increase. First Peoples president and co-founder Rebecca Adamson forecasts a confluence of events that will make the extraction of oil, gas and minerals from Indigenous land riskier in the future. She says, "First, Indigenous Peoples have more rights enshrined at the international and national level, and are exercising them more effectively than ever before. Second, as extractive industries search the globe for oil, gas and minerals, they are finding them increasingly on or near Indigenous land. And third, digital media is allowing Indigenous Peoples and their allies to access and share information more easily, giving them the ability to tell their story and conduct advocacy campaigns on a global scale that can directly impact the profitability and value of a company."

Wednesday 5 April marked an historic development in the relationship between Australia’s First Peoples, our shared country and all our unique flora and fauna.

This day in Canberra, the Australian Alliance For Native Animal Survival (AAFNAS) was officially constituted at a meeting of Indigenous representatives from around the country.

‘Today is the beginning of a new era of consultation between the original guardians of our land and government and institutional decision makers. The formation of AAFNAS will provide us with the opportunity to influence future policy for Australia’s unique flora and fauna.’

The concept of AAFNAS was born in Canberra on 10th November 2008 in response to the continuing massacres of landlocked kangaroos in the ACT without consultation with the Indigenous/Aboriginal peoples and local communities, and the arrest and prosecution of six Aboriginal people who were performing a smoking and healing ceremony. Since European arrival in 1788 far too many species of mammals, birds and plants have become extinct. This destruction of animals and land continues at a relentless speed.

The aims of AAFNAS are:

• To educate the Australian and international communities about our unique native flora and fauna. This includes the Aboriginal concepts of caring for country, natural resources and all life past, present and future.

• To link Indigenous and non-Indigenous Australians and international supporters to work together to help native species and their carers both locally and nationally.
• To tap into the ancient and intimate knowledge held by the Aboriginal people and build a grass roots national organisation.
• To re-establish land rights and allocate the resources necessary to establish carers’ centres/safe tracts of land for native species along the dreaming tracks.

Eric Craigie concluded by inviting other Indigenous groups to join with AAFNAS and become a unified voice for our land and our future.

There is nothing innocent about Peru! People in the world imagine Peru and think of Incas and Machu Picchu and its noble past civilisations. However, this era is well and truly over! Peru is still under the thumb of Colonialism, just the names have changed! Corruption is rife, and so is crime and human rights abuses. Mining companies are making a small minority mightily rich, and the indigenous and rightful owners of the land are suffering torture, death and death threats, loss of land, water pollution and loss of food. This is the 21st century, but all there is from the world is silence! Where is justice? This country is being raped, polluted and people are being abused, all quite "legally".

Many people in Australia are ignorant of what is really happening in Peru. They are still in the agony of Colonialism, despite "independence" since 1821! Only the names of the conquistador thugs have changed! Mining protesters are supposed to be in a democratic country, but the voices of the people are being violently crushed while their land is being confiscated, polluted and raped!

The mining company, Minera Majaz, subsidiary of the English Montericco Metals, is operating illegally on their territories. The license the company is operating with is illegal. The Chinese mining company, Xiamen Zijin Tongguan Development Consortium, since 1989 have 9% of their shares. The national coordinator of human rights has produced stunning pictures of assaults in 29 community sites of Minera Majaz.

27 men and 2 women unarmed protestors, representing the 29 communities from Ayabaca and Huancabamba, have been undefended by police or the legal system since being attacked and left in hell for three days before being released in August 3rd, 2005. Pictures speak a thousand words! They were simply exercising their right to protest.

The photographic records show how these peasants were attacked and tortured. One of them, Melanio Garcia, was killed. They were kidnapped and forced to walk barefoot on the steep paths towards the mining camp. They were tied up and sprayed with toxic substances that inhibited their breathing. Most of them were stripped, or left nearly bare, thus making them vulnerable to low temperatures and attacks. They were threatened with incarceration in Rio Seco prison with terrorists and drug traffickers and never to return home.

Senesi Jiménez Peña, the head of one community of Yanta, was struck repeatedly on the floor. Jiménez Peña was on the floor face down with his hands tied back. Fear gripped the majority.

They heard a desperate "Help me, God." And police in a mocking tone repeated that there is no God except the police.
The aggression and violence did not stop for three days. Exactly how Melanio Garcia died on August 2nd 2005 is a mystery, but the photos should reveal the extent of the violence and the possible circumstances.

There are now 300 leading environmental protestors facing prosecution in Piura and Cajamarca for “terrorist offences”. They include riot, conspiracy, theft and damage! However, they were simply protesting against environmental destruction of their homes and land and exercising an assumed basic democratic right to protect what is legally theirs!

According to spokesman and coordinator for Vicarate for the Environment, Nicanor Alvaradez Carrasco, the Upper Amazons are very rich in resources and are part of their heritage. Most of the Amazons are being overtaken by foreign companies who exploit them in non-environmentally friendly ways. Some exploit them illegally, like Minera Majaz.

Companies, like Monterrico Metals are contaminating their land, killing peasant leaders, and torturing those active in opposing Minera Majaz. The global community needs to know that these atrocities are going on!

Benefits from the mining are not being shared to the communities in northern Peru. Buckets of gold and copper are being extracted from Peruvian soil each day, but are being transformed overseas. The benefits for their country are very small. Communities are not receiving benefits, and there are no environmentally sound methods being followed. Foreigners are getting richer, while the inhabitants and the land are becoming poorer!

Minera Majaz, like other mining companies, is a threat to the environment, and is unsustainable.
According to Carrasco, after 15 or 20 years, there will be nothing left of the Amazons, or of the culture of the people or the biodiversity of the region. “Two peasant community leaders have been murdered. 50 cases of torture have been reported. 200 of us are being pursued legally and will be imprisoned in the next few months."

Alan Garcia’s government, who recently hosted Kevin Rudd and other world leaders who visited Peru in December for the APEC conference to discuss free-trade, is explicitly and implicitly supporting the mining. This corrupt government is making money and all the land of the Upper Amazons has been requisitioned by foreign countries.

"What is scandalous is that last week, military troops were sent into the region of Yanta, one of the areas belonging to the Minera Majaz concessions. These elite forces were sent there with the intention of opening a pathway for the Montericco Metals company, who had not been let in by the regions’ inhabitants in previous attempts. These peasant communities have radically opposed the mining company and have never let them enter their territories, even when it was the exploratory phase of the project. Now, the military is forcing its way in, which means that in the next few days we can expect the death of hundreds of the active peasant opponents."

There is no justice, and we in Australia should not be supporting APEC or supporting a corrupt and evil government under President Alan Garcia.