The absurdity of Australian news reporting on Syria would be funny if it were not for the disastrous consequences of such reporting for the people of Syria. I happened to see the end of a report from Matt Brown on 7.30 Report on the subject of chemical weapons in Syria. If it depresses me, think how the Syrians feel about our mindless repetition of war-crimes propaganda against Syria's army when that army is the only thing protecting most Syrians from foreign-backed terrorists. 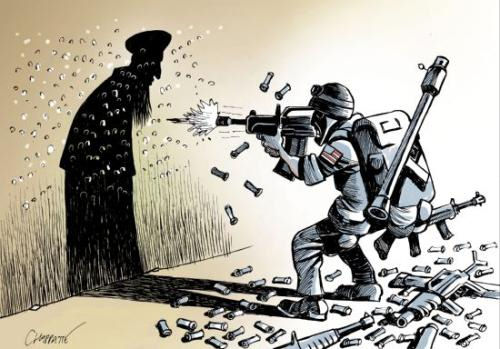 There was hardly a second in Brown’s dramatic production that was true or real. Even the supposed results of the Organisation for the Prohibition of Chemical Weapons (OPCW) investigation into Ghouta were misrepresented.

I’ve been shocked recently by the failure of the ABC, on radio at least, to even mention Syria other than briefly in news bulletins. I only watch SBS world news, which is of course just as bad. Instead of Sophie McNeill and Matt Brown, and Anne Barker, SBS has Nastasya Tay, whose propaganda wrap-ups are just stunning.

On October 23, for instance, reporting about the humanitarian pause in Aleppo, she showed the buses waiting to take residents from East Aleppo, but said, with what seemed like a sort of pleasure, that no-one took them, and that the Syrian army had fired on people trying to leave! Yet what happened was that the ‘rebels’ refused to give in, and fired on the relief route, forcing the buses to drive off at speed. Meanwhile they showed photos of people in the streets dancing and holding up Free Syrian Army (FSA) flags, and shopping at stalls of vegetables.

At the same time, over in Mosul, in Iraq, the boot is on the other foot, while the US claims to do just the same thing the Syrian Arab Army (SAA) is doing in Aleppo, with a slight difference. To be clear, in Iraq the US claims to be fighting terrorists in order to defend the Iraqi government, but in Syria it is defending terrorists (which it calls 'moderate rebels') in order to fight the Syrian government. Meanwhile, it isn't stopping ISIL from fleeing Mosul into Syria.

It’s the silence on what is really happening that drives me crazy! Did you hear any interviews with politicians about whether Australia supports more sanctions against Russia, or supports the Turkish army killing Kurds, or supports the Iranians fighting to liberate Mosul for Iraq – or anything!

Even when it was happening it wasn’t happening...

Once upon a time I would have tried to have put the ABC right, but to be honest, I think it has gone past the point of thoughtful analysis, with Brown’s propaganda, and that of Human Rights Watch (HRW) and the ‘doctors’ in Istanbul (!)

The fact is that the stories about ‘barrel bombs’ with chlorine are total fabrications, not because the Syrian Arab Army (SAA) didn’t use them, but because they would have absolutely no reason to use such a stupid weapon as ‘Chlorine’. After all, there is almost no evidence that Sarin was actually present and used in Ghouta, and I know of no evidence at all of Chlorine use other than some silly photos showing a cloud of Nitrogen oxides from a fertiliser bomb.

Note that in all such footage there are White Helmets present – so we may assume that these films are not true. President Bashar al Assad noted that the White Helmets are ‘Al Qaeda with a facelift’ in his interview on Swiss TV on the 19th of October, 2016..

Today, (22 October 2016) as the UNHRC report is released that claims proof Syria used Chlorine in March last year, the abandonment of any impartiality in this conflict by the UN is now complete.

Not only was the supposed use of Chlorine in an attack on Sarmin south of Idlib never established as fact with any real evidence, but its timing was completely suspect. It occurred just before or just after the launching by Saudi Arabia and Turkey of a force of thousands of militant jihadists, under the banner of the Army of Conquest – Jaish al Fatah – who swept south towards Lattakia and Hama and killed thousands of soldiers and civilians before they were finally fought all the way back by the Syrian Arab Army and Russian forces six months later.

So while our media carried on about this stupid story, in which supposedly a ‘grandmother’ and three children died, they completely ignored the rampages of the army of terrorists, for instance in their truck bomb assault on Jisr al Shughour hospital. This is just a pre-echo of what is happening now with Aleppo – that while the UN and Western leaders talk about the ‘slaughterhouse of Aleppo’ in the most extreme terms, the terrorists are on the rampage south of Idlib with their US supplied weapons, fighting the Syrian army and its allies.
If Matt Brown wants to see what ‘our allies’ are doing in Syria, like he does in Mosul, why doesn’t he get embedded with ‘Jabat Fatah al Sham’ – al Qaeda, south of Idlib?

And if Sophie McNeill is interested in the problems for children’s schooling in refugee camps in Erbil (reported on last night’s Lateline), why doesn’t she go to visit some suburbs of Lattakia or Damascus and see how all the refugees from the terrorists are managing there?

Not that the Syrian government would ever give her a visa...

I don’t know what to do about the ABC. When I hear their reports I get furious and think of phoning, but then I remember the last time and the time before, and how they have only got worse...