The two videos inside this article are Parts 1 and 2 of a seminar on "The Right of Blasphemy - No to Medieval Trials" which took place in Rome, Italy, on Sunday, October 30, 2016. The seminar aimed at raising awareness of the fierce campaign against the enlightening intellectuals in the Arab world. From assassinating the writer and intellectual; Nahed Hattar in Jordan, imprisoning the Islamic researcher; Islam Behery In Egypt, and the liberal blogger; Raif Badawi in Saudi Arabia, to sentencing the journalist; Mohamed Sheikh Walad Amkheter to death, to other, endless examples. “Blasphemy”is always a prefabricated accusation of anyone who tries to discuss or think differently. Of additional interest is the fact that the president of the secularist ADHOC organisation that held this very open-minded seminar was Syrian-born Randa Kassis, who recently met with Donald Trump Jr at the French 'think tank' the Center of Political and Foreign Affairs, headed by her husband, Fabien Baussart, to discuss US-Russian cooperation. (See "Hope for Syria! Trump's son at Randa Kassis pro-Syrian French think tank in October."

DR NADIA OWEIDAT: "I have felt personally in my entire ten years of being an analyst in Washington [...] that I am constantly accused of being not authentic enough because I'm not an Islamist.

So there's somebody has decided that if you from the region and it doesn't matter like I come from the biggest tribe in Jordan - my tribe goes back to the time of the Pharaohs - [...] but that doesn't make me authentic because I'm not religious. I'm not Islamist. Not just not really, just I'm not Islamist.

So I've had this accusation and its really irritating who has decided that unless an Islamist I'm not an authentic voice from the Middle East. [...]

We have to fight this because this sympathy is really costing the entire world, because it's a huge imbalance in siding with Islamist as authentic. [...]

Political Islamist parties have proven over and over that they are very authoritarian and there's enough of us in the Middle East that are really sick and tired of authoritarianism. We would like to see real human rights, would like to see real engagement. We want to play a role in building our countries and were excluded from from that engagement. [...] Islam is like returning regimes exclude everybody [...] who doesn't carry their vision. It's not even vision their narrow-minded ideology. So this really needs to be tackled [...]" (Dr. Nadia Oweidat: Modern Islamic thought professor.)

It has been very difficult to discover the list of participants and all their names. Below is a list advertised on the International Humanist and Ethical Union, IHEU site in England.

Whilst one can obtain an automated transcript of the speeches via you tube's transcript function, the accuracy is poor. I have tried to transcribe parts of the first and the second speeches and may put these up later.

Thirty people, including Donald Trump Jr., attended an event on October 11, 2016 at the Paris Ritz. The event was hosted by a French think tank, founded by Fabien Baussart,and his wife, Randa Kassis. Ms Kassis is Syrian born and the organisation has been trying, with Russia, to end the war in Syria. Baussart has described as "absurd" the political stance on Syria of the US and some countries in Europe.This meeting occurred prior to Donald Trump Sr.'s election to President of the United States. It gives support to many hopes that President Elect Trump meant business when he talked of cooperating with the Syrian Government and Russia to end the war in Syria over which he rightly accused the Hillary Clinton and Obama regime of incompetence. Unfortunately, Australia has assiduously followed the Clinton-Obama regime line, with the shameful support of most Australian mainstream media. 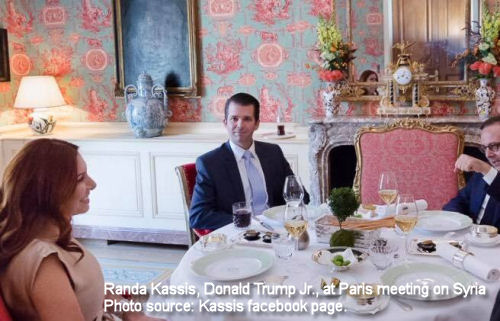 Kassis wrote on her facebook page, "Syria's opposition got hope that political process will move forward and Russia and the United States will reach accord on the issue of the Syrian crisis, because of Trump's victory. Such hope and belief is the result of my personal meeting with Donald Trump junior in Paris in October… I succeeded to pass Trump, through the talks with his son, the idea of how we can cooperate together to reach the agreement between Russia and the United States on Syria."

She was also quoted by Sputnik, saying, "I think Donald Trump’s vision of the Syrian settlement will be close to Russia’s approach. I think the conflict will stop. I hope that in practice this will happen as soon as Syrian radical Islamist groups are cut off from their financing sources."

As the next US president, Donald Trump could show support for Moscow's approach to the Syrian settlement. His team includes people who are ready for dialogue with Russia, French analyst Fabien Baussart told Sputnik.

Sputnik also reports that Baussart said, "State Secretary John Kerry permanently told lies to his Russia colleagues, which created obstacles for a constructive dialogue." Sputnik says that Bausart noted that Trump’s team consists of "people who can launch constructive cooperation with Russia." It adds that "Baussart underscored that the "fight against radical Islamism serves the interests not only of Russia and the US, but also of Europe and Muslims peacefully practicing their religion." "However, Britain, France and even Germany embrace an absurd closed stance on any proposals on the Syrian crisis." Read more: https://sputniknews.com/world/201611141047422760-trump-russia-syria/