During the US presidential inauguration ceremonies Trump's elegant and disciplined clan members appeared brave in the face of multiple violent threats, fanned by a jilted mainstream press, for example, CNN's, "Disaster could put Obama cabinet member in oval office." Beside their chubbier leader, beaming like John Candy, the females of the Trump clan, with their gazelle-like legs and long hair, flawless skin and physiques, seemed like avatars from another world.

A correspondent commented to me this morning on her perception that the Age and the ABC underreported aspects of President Trump's inauguration. "Melania really did look stunning, but there was a lack of positive comment re Melania’s dress, a lack of any sympathetic camera work on her. This was in contrast to the gushing over Michelle Obama eight years ago. It is to do with the level of warmth. I felt that, with the Trumps, the commentary and footage were overly cold and objective compared with the same event eight years ago. In fact, I found this article, which bore out my feelings: #10;http://fashionista.com/2016/11/melania-trump-fashion"> "How we plan on covering (or not covering) Melania Trump's fashion choices". It shows that there has even been a politicisation of reporting on fashion with regard to the Trumps."

Indeed, the New York Times, which does gives some quite interesting fashion details on who dresses the Trump entourage and the semiotics of their costumes, also reports in the embedded video, on how a number of fashion publications have snubbed the Trumps because of a perception that Donald Trump is racist. This is based on his attitude to protecting jobs for Americans, illegal immigrated violent offenders and immigration from source countries for ISIS - all defensible positions even if you don't happen to agree with them. They do not make Trump racist.

But the fight is really nationalist vs globalist. The globalist open-borders exiting US regime pursued the most racist of wars in the Middle East and now it is going after Trump, the anti-Soros. The out-going regime and the press that supports them are heavily sponsored by Soros who also has succeeded in diverting many organisations from their original agendas and getting them to push for open borders, an agenda that runs against civil rights and assists globalisation. We can see this in the Women's marches today, 22 January 2017, where feminism has apparently been coopted to incoherently support globalism as well as protest more reasonably on behalf of abortion-rights. (See "George Soros big loser in US elections funds hi-jacking of feminism for globalist agenda." 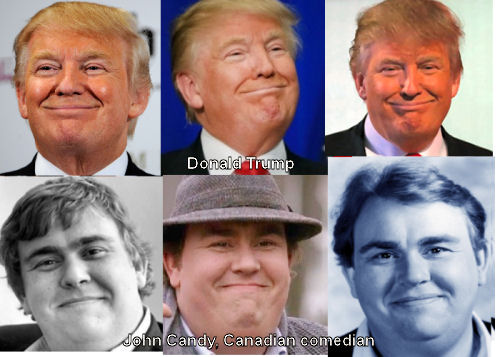 Am I the only one whom Trump's goofy smile reminds of John Candy, the charming Canadian comedian who died in March 1994 and who played many eccentric characters? There is something in the eyes and the mouth and a way of moving, but perhaps it is mostly that Trump appears larger than life and is funny and outrageous, like Candy. "If I was elected, you would be in jail, Hillary!"[1]

Admittedly, if you don't think there is anything funny about politics, and particularly about Donald Trump, you might not see the humour and you might hate the charisma, but you still might agree that the 2017 US election had elements of a National Lampoon comedy that Candy might have played in. The statuesque wife, who looks half her age, the lanky daughters displayed on stage like two legged-giraffes in designer gowns and the pizza-gate-lolita-island scandals surrounding the departing US regime and Donald, larger than life, prevailing, assisted by his unforgettable hair.

[1] Second Presidential debate dialogue:
HILLARY CLINTON: “It’s just awfully good that someone with the temperament of Donald Trump is not in charge of the law in our country,” Mrs. Clinton observed.
TRUMP: “Because you’d be in jail.”