Is Trump just falling in line with the evil establishment and going for more 'regime change' in Syria like Obama who preceded him? Is this another illegal invasion of Syria by the United States and NATO? Probably not, because the Syrian President would have complained, but has said nothing. Neither has Russia. Nor has Turkey. Something new is going on in Syria and it may actually be good. Could the end of this terrible war inflicted by US-NATO upon Syria finally be in sight? 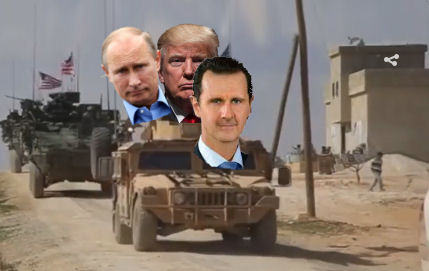 Despite Trump's formal disapproval of Iran, Iranian television has once again risen above the situation in delivering a superbly objective inquiry or debate about what Trump's 400 new troops might be doing in Syria. You can watch it here http://presstv.ir/Detail/2017/03/09/513707/US-military-Marines-Syria and it will probably soon appear on Press TV's you-tube channel. This episode of Press TV's 'The Debate', canvasses the opinion of Jim W. Dean, the managing editor of Veterans Today, from Atlanta, and James Jatras, a former US diplomat, from Washington, on the deployment of hundreds of US Marines to Syria. As usual interviewer Kaveh Taghvai's questions are right on the nose.

On RT a day or two ago, probably 8 March Russian time, Catherine Shakdam (Middle East commentator) also argued that during the recent talks in Geneva, which the US attended, the US probably obtained Russia and Syria's permission to enter Syria and cooperate with the Syrian Army and Russian troops. There is no public confirmation of this and Trump has repeatedly said that he isn't going to give details of his military plans - and I don't think Russia or Syria would either.

We cannot help noticing that Putin has both Erdogan & Netanyahu in Moscow at the same time, ostensibly for individual talks with Putin... but it is interesting they're both there together, if we take into account their mutuality of interests.

In the meantime,Catherine Shakdam/s interview has been removed from the RT news record as far as I can see from searching, with a talking [male] head from UK being much more dour on Trump. Not that Shakdam is pro-Trump; she was also keen to portray him as trying to seize victory from the jaws of Syria and Russia for his own glory. For all the Soros/Clinton/Obama administration's conspiracy confabulation regarding RT, that online broadcasting channel, with its American channel based in Washington, D.C., was almost entirely anti-Trump before the US election and remains anti-Trump, with Watching the Hawks, The Big Picture and Redacted Tonight playing to the New York and Washington Left. In this it probably fails to reflect Putin's own preferences. Before the running up to the election The Big Picture was generally quite stimulating because of the wide-ranging politics of its invited panelists. As the election actually loomed, host Tom Hartman seemed to panic and dropped all his republican-sympathetic guests, delivering a kind of CNN program. Crosstalk and Going Underground seem to be the only relatively objective programs on the subject. Excellent and original female interviewers Oksana Boyko and Sophie Shevardnadze, who have their own programs, Worlds Apart and SophieCo respectively, are pretty even-handed, but Boyko has indicated a distrust for Trump's administration. Perhaps Boyko's opinion is a reflection of the new-class influence of post-graduate education in the United States. This does not stop her programs having breadth, however. Sophie Shevardnadze is an exceptional polyglot with a wide international education.