I have found that I and people I know are increasingly working longer and longer hours. And this with ever increasing demands on the job, as the demands for perfection increase, and the support to achieve it decreases. Especially the large organisations in which we are working appear as despotic, in that one has no say over what happens or what might happen, but instead is faced with a stream of orders and new demands being delivered constantly, yet randomly, through the impersonal medium of email. There is no discussing with this new invisible master - often the sender is not even a person with whom you can engage in conversation, but some impersonal departmental (i.e do-not-reply) email address. Then one finds that travel to anywhere is time consuming, and extremely stressful, as conditions are crowded and arrival on time is far less than certain - whether it be by train or car. With people arriving home late, exhausted we must prepare meals, often reply to a few still-unanswered work emails. All of which leaves us little spare time - and in such a state of mental exhaustion that we could not enjoy it anyway. Necessarily our weekends are often consumed with the other chores of life, maintaining houses, shopping, and preparing food and clothing for the next hectic week. This sad condition of modern people led me to reflect as to how we got into this state, and what has changed to make modern life so difficult. I wondered how we used to cope, and I recall as a child how the weekends were quiet, the shops were closed after midday Saturday, and there was hardly any traffic. Now, the busiest traffic times are on weekends, as is the busiest trading. And a major reason, I think is the fact that now both partners work, there is no-one with time to do shopping in the day, prepare meals for 6.00 pm (we often eat much later, even if we feed the children earlier, either my wife or I may find it is 9.00 pm before we have time for dinner). So why is modern life so crazy? 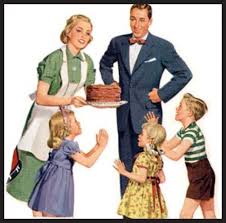 Chesterton, it appears, is someone who also reflected on and addressed many of our modern problems - that fact that he did this 100 years ago seems to make little difference to the relevance of what he had to say in his book What is Wrong with the World. Not suprisingly the issue of gender roles is one he addresses at length. But what is surprising, and in a sense enlightening, is that he argues that the traditional roles of men and women were not established to trap women, but rather to free them from the madness of industrial society. According to Chesterton, the gender arrangements in early industralism insulated women from the commercial pressures of having to be competitive at work - which Chesterton argues makes one a 'monomaniac'; necessarily too-focussed on work and its demands for specialisation to become a complete person. The traditional arrangements, Chesterton argues, were to keep some part of humanity free from these inhuman demands. To allow at least one half of humanity to be whole people, to allow them to develop as complete, to become good at many useful things rather than an expert at mostly one thing. To allow them to focus on and contemplate the broader issues and tasks that are so necessary to a sane and on-going human existence. This half of humanity, to be spared from the inhumanity of industrialism was, women. He explains this division was made because the natural role of women in relation to birth and child-rearing, but they need not be child-rearers to benefit from these freedoms. I guess with the freedom also came the ability to pursue study and careers if they wished - certainly many women did - C.S Lewis's mother was a Mathematics university graduate in the 1800's and Dr Maria Montessori a science graduate not long after that, and I am sure there were many others. Clearly they could also have careers if they chose; Florence Nightingale is an example here. Maybe this education and these roles were harder to get, but when you consider that they were up against people - mostly men - whose livelihood depended on them succeeding and devoting their all in the narrow specialisations demanded for most jobs, then it is perhaps no surprise that such positions were hotly contested and no more so by those who had the most to lose or gain from them i.e men who desperately needed a way to earn a living.

So then we come to the criticism of this 'patriarchal system' we are presented with the image of the despotic man, who because he is the breadwinner (and perhaps also because he himself is fully aware of his suffering from the absence of any real freedom, having to subject himself to the demands of an employer for the working week) demands that he has more rights and privileges in the household. Now there are at least two ways to see this: one as though the system is wrong and two, as though the man is wrong. The modern argument seems to commonly be that the system is wrong - that we should grant women equal power and opportunity. But this comes with two great risks. The first is that women lose their protection from the commercial world and are now subjected to the same evil forces of competition that men are. Secondly, there is an assumption that some, perhaps many, will not succumb to the same demand of special rights and privileges as men were accused of doing: becoming equal despots with the worst of men. Such a situation is rife for conflict with each party demanding special privileges and rights (i.e rights to disregard the rights of others) as a result of their sacrifices and as due their power and authority. And this is leaving aside all the problems that arise when humanity loses its generalist and all the benefits that came with this - more on this later perhaps.

The other view is that there is nothing wrong with the general family system, but rather there is something wrong with some individual men. Good men, endowed with such authority and whatever power comes from being the breadwinner, should endure the associated suffering with tolerance and kindness and not seek to be overbearing but rather be generous and as kindly as possible under the circumstances. Development of such magnanimity requires a good raising of boys to understand their roles, responsibilities and passing on the ideal of a 'good man' as having these attributes.

Unfortunately, with women and men now desperately caught in the worldly competitive fray that sucks nearly all their energy, thought and time, it is unlikely that many men, or women, will be taught and developed in such a way. So it seems we all degenerate into dog-eat-dog competitiveness and bickering over who has what rights and privileges. The situation is complicated by the fact that despite modern developments in the workplace, the old role expectations are still in place. Even though you may say that men can help with the housework, and perhaps even be stay-at-home dads, men still feel the expectation that if it comes to the crunch, they are the ones who must provide an income, so they carry the stress and burden of having to be on top of their game, as well as doing new chores that traditionally men did not. Even if ostensibly a man is a stay-at-home-dad if anything happens to their wife's position they must return to work, and that with the added difficulty of having been out of the workplace for a period. On the women's side, they appear to still feel the traditional obligation to maintain certain standards around the household, on top of their new duties. So on both sides there persist these stresses that are likely to lead to senses of injustice and the potential break out of arguments.

On top of this are all the additional modern stressors I mentioned above. Traditionally men had to give their all to their jobs for 8 - 10 hours a day maybe 5 and a half days a week. But at least back then the work stopped after hours. And married men didn't need to also shop for food, cook their own meals, clean the house, etc (just as many married women did not need to work in commercial ventures). Now the demands of work are increasingly, all day everyday, with many people working 60 hours or more, and that is not counting time spent answering emails after hours or contemplating work problems during the night or on weekends. Add to this the enormous amounts of time many spend travelling - another modern phenomena - and a significant stress for men and women.

I am sorry but I do not have any solutions to these problems, I can merely state the situation as it appears to me. But I can summarise this situation as being a kind of dilemma whereby we need to find a way to retain in people that magnanimity that I mentioned above - that the sense of sacrifice men probably mostly felt by being locked into mindless or demanding jobs, from which there was, and perhaps for many still is, no realistic escape - that this should be seen as a sacrifice of love and an opportunity for generosity of spirit. And it seems, given the modern situation of women, that many women perhaps also could take this view of the demands that they see as placed on them. Perhaps women have traditionally done this on the whole, but if so the need now for such an attitude is as a great as ever.