This article is the text of a speech by Sheila Newman about how Kennett Government policies pushed up population growth in Victoria and Australia. Whilst many people remained for a long time under the impression that immigration numbers were a Federal domain, he began the practise of using regional migration definitions to attract people to urban Melbourne. He also de-toothed Victorian industrial law, affecting wages, condition and enforcement. The new interpretation of regional migration was adapted by other States and territories. Kennett's attack on Victorian industrial laws would ultimately pave the way for Workchoices and a much less effective system for ensuring that imported workers were not paid less than Australians, creating a new pull-factor in Australia.

This is the text of a speech given to SPAVICTAS AGM 2015.

Way under the radar of the general public, the Kennett Government (1992-1999) began a practice of using the rural category of ‘region in need of migration’ to reclassify Melbourne itself.
Melbourne was thus reclassified a regional migration area by the Kennett Government in 1998, which meant it became a destination for people who traditionally migrated to country regions under softer entry rules. [1]

Regional migration categories permitted easier entry for immigrants. Rural employers could sponsor workers for positions they claimed they were unable to fill, with fewer tests than urban employers and immigrants coming in under classical federal schemes. They could also sponsor a wider range of family reunion, such as nephews, to work in family businesses. [2]
The trend that Kennett started was imitated by the other States. Over time all the other states also declared their CBDs in need of immigration under regional migration rules. This was the time of the rise of the internet. Before this time, immigration had been a long drawn out process that was hard for individuals to initiate or get approval for. Now Australian States started up state Immigration websites advertising state and private sponsorship of immigrant workers and their families. Currently, these include:

In Victoria, liveinvictoria.gov.com.au; Note that the Victorian government has just changed the name of their liveinvictoria.gov.au website to https://liveinmelbourne.vic.gov.au/. Probable reason is that they know people are onto the old site.
in WA www.migration.wa.gov.au;
South Australia, migration.sa.gov.au;
in Queensland, migration.qld.gov.au;
ACT, canberrayourfuture.com.au;
Northern Territory, australiasnorthernterritory.com.au; Tasmania, migration.tas.gov.au

Kennet was congratulated by people in favour of high Migration for having increased migration to the regions and reversed the long-term trend of migration out of Victoria, much of it to Queensland.

This perception was criticised because the so-called ‘regional migrants’ mostly ended up in urban Melbourne. [3]

Nonetheless, I would make the following case that these migration policies and several of Jeff Kennett’s other policies were a major factor in creating conditions which would set Australian on a terrible path to rapid and uncontrolled mass migration.

Before the Kennett government, most Victorian wage earners worked under state awards which prescribed minimum conditions and wages, including holidays, benefits and penalties for an extensive range of employment roles. Any employee could look these up or have them explained easily by the Victorian Industrial Relations Commission, through a hotline called Wageline – where I worked. But in 1993, the Kennett Government abolished the Victorian Industrial Relations Act, replacing it with the weaker and harder to enforce, and poorly staffed, Employee Relations Act. [4]

Other Australian states imitated this initiative.

Unions scrambled to cover employees by registering new awards under Federal law, under s.51(xxxv) of the Australian constitution. These awards, however, had to be negotiated between individual organisations and their employees. Their enforcement was very limited under the Federal constitution. They were mostly inaccessible and incomprehensible for individual employees.

This right-wing revolution in Victorian industrial law under Kennett in 1993 set the scene for Workchoices under the John Howard government, (11 March 1996 to 3 December 2007). The Howard Government, entering this weakened industrial law and industrial relations situation, went on to widen the use of the corporations clause in the Australian constitution, which exempted corporations from many employer obligations. [5]

Up until now Australian employers had not had much to gain by importing immigrant workers because they had been required to employ them under the same industrial awards as native born workers. That meant that there was not the same opportunity to import cheap labour as there was, notoriously, in the United States.

Today we are in a situation where the Australian labour market has been greatly deregulated and it is now possible to employ overseas immigrants according to individually tailored employment contracts where they have little or no bargaining power or recourse for legal protection.

Coupled with the deregulation of immigration, this has created local pull factors which the Australian growth lobby has been keen both to lobby for and to exploit.

Deregulation of housing market and Rise of the Internet as factors

- Deregulation of the Australian housing market to permit overseas purchase and investment
- The rise of the internet, which was exploited by state governments, private migration agents in conjunction with employers; universities seeking students; and property financiers, conveyancers, developers and real-estate agencies, to globalise Australian employment, public institutions, universities, and property.

Steve Bracks and John Brumby would continue Kennett’s big population campaign, despite the different brand presentations of their politics.

Was Kennett aware of his contribution to setting in motion Australia’s unfortunate population tsunami? He was a great population growth spruiker and had served formally as Minister for Housing, Immigration and Ethnic Affairs in 1981 under the Hamer government. He has made many public declarations on his perception that very high immigration is desirable.

In The Age in March 1998, the following businessmen and politician argued that population growth was desirable and inevitable: Tony Berg, then Chief Executive Officer of Boral Industries (building materials and components) and still, in 2001, director of numerous banking, insurance and property trust related groups and holdings, and the Midland Brick Company; Jeff Kennett, populationnist Premier of Victoria (who presided over a developmentalist Ministry for Planning and Infrastructure which decreased housing lot sizes under a code and administration largely unresponsive to public outrage), and Phil Ruthven, who again claimed that by the end of the 21st century Australia's population would be 150 million.

The theme of needing a big population in order to repel invaders remains popular. In "More Migrants, Pleads Kennett", by Christine Jackman in the Melbourne Herald Sun, 12/2/1999, Victorian Premier, Jeff Kennett was quoted telling "a New York business lunch" that "Australia's population was so low it would not even be able to defend Tasmania", attacking immigration levels as "almost negligible".... and underestimating them at "about 60,000 a year." (Source of quote is Sheila Newman, The Growth Lobby and its Absence, Chapter 6, http://tinyurl.com/p4ykwup) 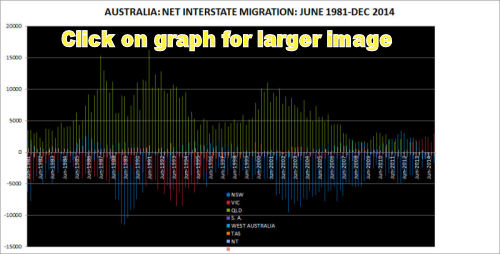 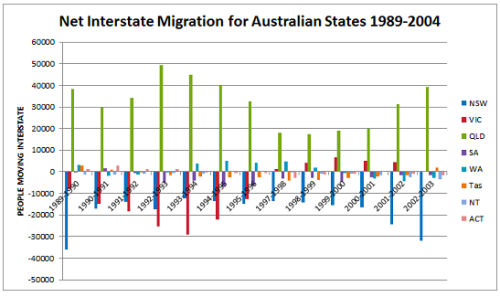 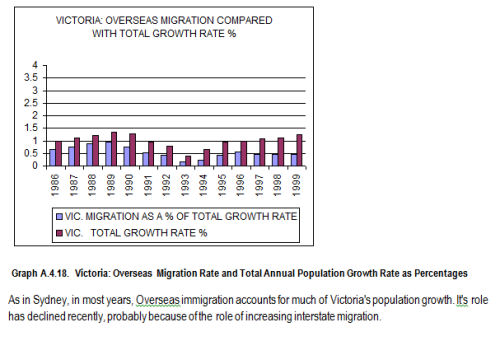 The Skilled Regional (489) visa is a provisional skilled migration visa that can provide a pathway to permanent residence. The visa is administered by the Commonwealth Government’s Department of Immigration and Border Protection (DIBP). Prior to applying for this visa you must be nominated by a state or territory government, or sponsored by an eligible relative living in Australia.
The Victorian Government offers state nomination under the Skilled Regional (489) visa for highly skilled and eligible professionals and tradespeople who want to work in regional Victoria. Source: . [Last accessed on 27 September 2015]. More general visas on that page : http://www.liveinvictoria.vic.gov.au/visas-and-immigrating/state-nomination#.Vd_lAys_i1Q .

[4] My reference is personal experience in the Victorian Department of Labor at the time, and, Richard Tracey, “Standing Fast, Federal Regulation of Industrial Relations in Victoria,” H.R. Nicholls Society, http://archive.hrnicholls.com.au/archives/vol14/vol14-3.php]

[5] https://en.wikipedia.org/wiki/WorkChoices: “Relying on the corporations power of Section 51(xx) of the Constitution, the Howard Government extended the coverage of the federal industrial relations system to an estimated 85% of Australian employees. All employees of "constitutional corporations" (i.e. trading, financial, and foreign corporations) became covered by the WorkChoices system. Other constitutional powers used by the Federal Government to extend the scope of the legislation included the territories power to cover the Australian territories, including the external territories of the Christmas and Cocos Islands, the external affairs power, the interstate and overseas trade and commerce power, and the powers of the Commonwealth to legislate for its own employees. Victoria voluntarily had referred its industrial relations powers to the Commonwealth in 1996, under Section 51(xxxvii) of the Constitution.”

[6] The Age, 16 March, 1999, "Kennett calls for big rise in migrant intake", Cited in Sheila Newman, The Growth Lobby and its Absence, Chapter 6, http://researchbank.swinburne.edu.au/vital/access/manager/Repository/swin:7395 (with appendices) or (without appendices) http://tinyurl.com/p4ykwup

[8] “Trevor Sykes, The Bold Riders, Allen and Unwin, St. Leonards, New South Wales, Second Edition, 1996, (Year 2000 reprint), p.337 mentions that Pratt controlled Regal Insurance and Occidental Insurance in the late 1980s and was one of the funders of a shelf company called Bacharach Pty Ltd, which corporate cowboy, Abe Goldberg, used to purchase Brick and Pipe Industries, which he believed to be an unrealised land bank. Additional information about business interests was obtained from the Business Who's Who of Australia, Dun and Bradstreet Marketing P/L, 35th Edition, 2001.” Cited in Sheila Newman, The Growth Lobby and its Absence, Chapter 6, http://researchbank.swinburne.edu.au/vital/access/manager/Repository/swin:7395 (with appendices) or (without appendices) http://tinyurl.com/p4ykwup