People are speaking out! A host of women in the entertainment industry have come out with a range of complaints about male colleagues, complaints which hark back many years. It has been a cascade of allegations and the sense one gets of the emotions of these women is as a type of catharsis They demand to be treated with respect in the workplace. The "Me Too" campaign has managed to organise and galvanise women in protest against named powerful figures in Hollywood and elsewhere in the entertainment industry in countries like Australia. Impassioned speeches were made at the Golden Globe Awards, notably by television identity Oprah Winfrey. (The media infers from Oprah's short speech that she may now run for President of the United States!) The issue of sexual harassment in the workplace in the entertainment industry has erupted since accusations in 2017 against movie mogul, Harvey Weinstein, and now his name appears to be mud. Craig McLoughlin in Australia, who played Dr. Blake in a dreary TV series called, The Dr. Blake Mysteries has been suspended in the latest series in the making. He will no longer be playing the main role in the current production of Godspell due to complaints by his female colleagues. There is a righteous indignation and outpouring of emotion from women affected. It's out in the open. The men named all deny wrongdoing. Presumably efforts will be made to get to the truth. 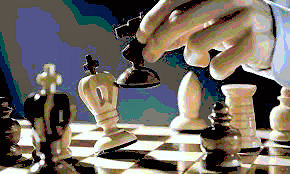 On January 9th the first same sex marriages in Australia not requiring a waiver took place. The LGBTQI community has been victorious in having their relationships given the same status as traditional marriages. They have triumphed over prejudice and the celebrations and the volume of apparently pent up demand for marriage gives a sense of societal progress occurring in quantum leaps, or so it would appear from media reporting.

The space given in the media to members of special designated ethinic communities also creates a sense that the more that complaints and achievements are aired, the more progress is occurring. A recent example is of representatives of the Sudanese community speaking on episodes of crime and the needs of that community, all gives me a sort of illusion of progress, but towards what?

All the while, as we view our cities, our country, our communities on the screen in our living rooms, and see the women, the LGBTQI communities, the members of various immigrant groups, the message to us is of progress, as though there was no tolerance or even any experience of these differences before. We feel we are making every effort towards a better, more vibrant, more diverse, society. We are having some successes and some failures but all the while making progress as people speak out.

But how are we viewed by those in control? Probably we are seen as mere pawns, possibly knights and bishops, in their big board game. The large unseen hands of the power elite remove the autonomy of all groups, even those who feel in control of their lives. These hands don't differentiate between LGBTQI members, women, seniors, the Lithuanian, or the Sudanese communities, except in terms of getting their attention.

Toll road builders are not concerned with community specific values, they just want them to own a car and pass under their gantries on the toll roads. Furniture warehouses will hope that newly marrieds from any group will buy all the paraphernalia that furnishes a house, whether it be in a newly built apartment or a hastily flung together suburban dream, rammed up next to its neighbour, in the outer west of Melbourne. The housing construction lobby does not care whose money pays for the overpriced floor space in Melbourne, Sydney, Perth or any other growing town, that purchasers hope will bring them within striking distance of the source of income to make the mortgage repayments. The banks don't care who makes those repayments. It's all the same to their bottom line.

Their aim is to put all of us to use, get us working, consuming, driving, borrowing, building. They want an increasing income stream from all of us, no matter who we are, and in increasing numbers.

We are being sorted and sold off by a ubiquitous but invisible oppressor that knows and dictates what we want and where we have to go.

Watching Q&A is an increasingly confusing experience. It would appear, from the questions and the panel responses, to anyone with a perspective of more than 30 years that we have not just been marking time but gone backwards with respect to gender and sexuality, anti-racism and colonialism. There was a sense of enlightenment in the 1970s, when women burned their bras, anthropologists wrote about gender pathways, and women in the Middle East wore miniskirts and went to co-ed universities - but things have gone downhill since. From current discourse as exemplified often on the media and especially on ABC 1's Q and A, it's as if the easy-going youth cultures of the 60s and 70s never happened ! We are now being 'educated' about a grey future where the best we can aspire to is mutual tolerance, when once we had far greater ambitions. In the 70s, for young people, the sky seemed to be the limit in terms of understanding international friendship possibilities. This was long before the Internet but when international travel became more widely available and there was a bit of a pause in wars which have since become constant. 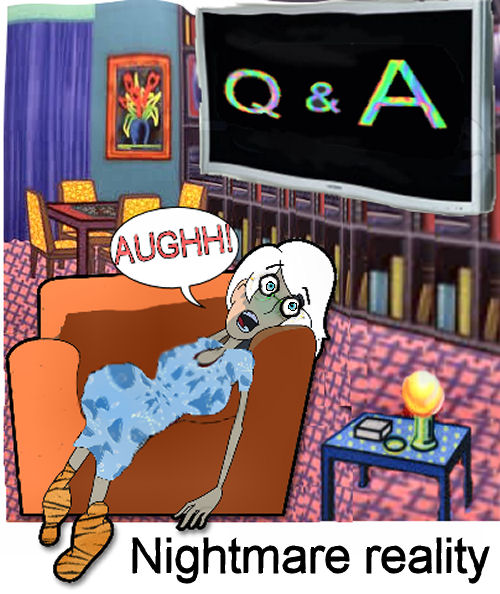 A strange Monday night experience at home in Melbourne

Sylvie stirred on the sofa as one program ended and a set of promos began. It was the change of rhythm that disturbed her, or perhaps a slightly higher volume on the television. She was still barely awake but was aware that she needed to undress, clean her teeth and wash her face before bed. It was cold in the bathroom so she stayed put for a little while in the warm living room. Somehow the television looked different; larger, much larger, brighter, flatter than before. The promos had finished and the next program started. The people on the screen were unfamiliar to her. It was a panel show with a studio audience. To her amazement, one of the women on the panel was wearing a sort of archaic black head dress but spoke with an American accent. Sylvie sat up with a bit of a start. Where had this program come from? It was not the normal Monday night program. She went over to the television to try another channel but could find no way of adjusting this TV. She sat down again transfixed. Questions were coming from the audience to the panel. The themes were unfamiliar, troubling and seemed to concern Britain and the US. They referred to recent violence in the US and one of the panel members, a young British sounding woman was talking about Nazis and how there must be no ambiguity in our condemnation of them. Well of course they should be condemned! Sylvie was not used to local programs being so serious. And why were they talking about Nazis? WW2 ended about 30 years ago ….didn't it ? The program was mildly disturbing and seemed to be preaching to her.

She stood up and walked into the bathroom. The image in the mirror looking back at her was that of an old woman. She moved toward her reflection and frowned. It frowned back at her.
Somewhat shaken she wandered back into the living room and sat down. She turned her attention once again to the TV program. It was getting more and more agitated.

They were talking about "progress" and was it moving too fast? Sylvie was trying to figure out what sort of progress they meant. The girl in the black head dress said that progress was not happening fast enough. The progress they seemed to refer to was progress that resulted in some people losing some of their advantage. Sylvie could not work out who these people were nor who, in exchange was supposed to be better off.

She had obviously lost a few decades since falling asleep. This was a very bad habit. "Where is everyone?" she wondered. Her long term partner, June, had gone out for the evening and had not yet returned. "She should be back in the next hour," Sylvie reassured herself. They had been together for 10 years and had raised June's daughter Rhiannon together from the age of 10.
Sylvie was too shocked to go back in the bathroom and see her reflection. She re- focused on the TV program. Names like "Barak" and "Trump" came up several times. "Who are they?" she wondered. They were talking about interviewing members of the "far left" and the "far right". These were unfamiliar terms and sounded rather scary. " Nazis must be stopped " came up again. “Discrimination is worse than being accused of being a white supremacist!" the young woman journalist declared emphatically. “Neo Nazis are violent” said the young woman in the head dress.

Women’s lives in the Middle East

The panel discussion moved on to women's rights in Islamic countries. “Strange, all this focus on things Middle Eastern!” Sylvie had thought that women in Iran, in Egypt, in Syria lived fairly liberated lives. "Maybe they don't …or maybe they don't any more? But why such a focus on this in this program?" Sylvie was really puzzled.[1] 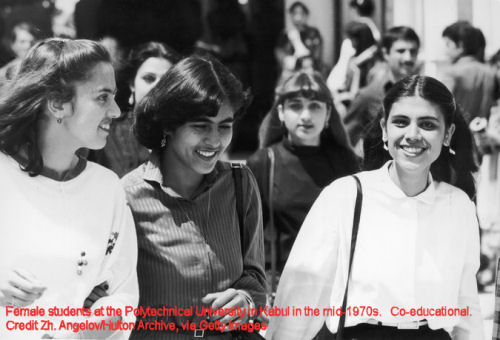 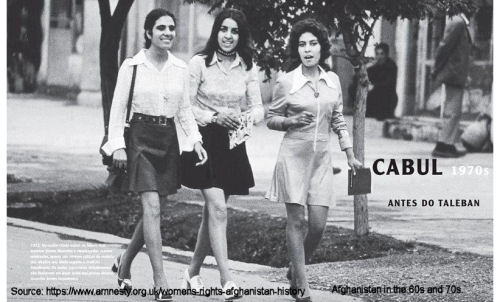 "My God, what has been happening ?" Sylvie wondered.

“I went to sleep in 1979 and I don't know where I am now. It seems to be some terrible dystopia. But what caused it?”

Coincidentally the panel started talking about the current popularity of dystopian novels, mentioning George Orwell’s “1984” which Sylvie had read when she was about 18. “ God,” she thought rather sleepily,” perhaps something terrible happened in 1984 but I've missed it!”

The future being discussed on the program seemed to be looming even more negatively as the very strident young female journalist declared that the reading of dystopian novels was "trauma rehearsal."

The program started winding up as she heard a key in the front door lock. "Oh thank goodness June is home. Perhaps she can fill me in. Did I have a stroke?"

"Hi Darling!” June’s soft smoky voice called from the hallway. “How was Q and A? As irritating as usual?"

"Yes it was very disturbing, in fact. I went to sleep just before it and couldn't quite bring myself into the present. It all looked and sounded very strange as though I was seeing something way into future. How was the council meeting? Is there any chance of stopping that 20 storey development down the road? "