This article was republished on the Syrian Free Press on 4 Nov 2017.

[UPDATE 7 Nov 2017: Added excerpts from President Rouhani's speech.] I was riveted by this video in its presentation of the antithesis of United States policy in new agreements between Russia and Iran. The video begins with a remarkable political message in the ceremonial exchange of documents of agreement on very important material matters, which should make a big difference to politics in the region - and won't please the United States. These included agreements on nuclear energy transport cooperation, oil and gas exploration, technology and information technology, railway electrification, urban construction and development, trade in the energy industry, visa-free travel for groups between Russia and Iran, and agreement on extradition of convicted persons between the two countries and cooperation on legal affairs. In addition they agreed on mutual cooperation in fighting Islamic extremism, the encouragement of cultural exchange and sports, and working on the Convention on the Legal Status of the Caspian Sea. This news conference was part of a trilateral meeting of Vladimir Putin, President of Iran Hassan Rouhani and President of Azerbaijan Ilham Aliyev. Putin and Rouhani appear in the video. You have to be aware of the momentous nature of the agreements in order to appreciate this otherwise somewhat stilted piece of diplomatic theatre. America has been trying to isolate and weaken Iran, which has both considerable oil reserves and a catbird seat on the shores of the oil-rich (if logistically highly problematic) Caspian Sea. America has backed wars in the region, invaded neighbours, and tried to undermine support for Russia in the Middle East because it wants permanent influence there. Obama, in his negotiations about Iran's use of nuclear power, may have been trying to keep some communications open, but Mr Trump has breached all democracy by openly threatening Iran. Iran (now that Syria has been crippled) is the leading technological and socially progressive power in the region, bitterly resented by Saudi Arabia and Israel. Now, apparently ironically, but actually quite naturally, Russia has resealed and expanded its friendship with Iran. In so doing, it has made Iran much more secure. How will the United States, NATO and the EU respond to this?

President of Russia Vladimir Putin: I would like to thank the President of Azerbaijan for the idea of holding such summits and thank my Iranian colleague for organising the second summit of the leaders of Azerbaijan, Iran and Russia.

I believe such regular meetings in this format are very much in demand. They make it possible to coordinate positions on the most acute issues on the regional and international agenda, conduct a constructive search for solutions to shared problems in the sphere of security and the fight against terrorism, and promote trade, economic, cultural and humanitarian cooperation.

The main areas of trilateral cooperation are reflected in the Joint Statement that we will sign following today’s summit. I would like to point out several things I consider important. 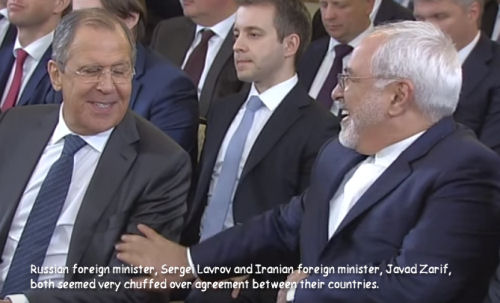 No doubt, ensuring regional stability and security is one of our principal tasks. It is necessary to improve coordination of the activity of [our] intelligence and law enforcement agencies, establish an intensive data exchange on the activity of international terrorist and extremist organisations, fight drug trafficking and transnational crime, and stop the attempts to transit militants via our countries.

It is important to continue dialogue on Caspian problems – our colleagues just talked about that – and finish the work on the Convention on the Legal Status of the Caspian Sea as soon as possible.

Needless to say, special priority should be given to promoting mutually beneficial trade and economic cooperation. Last year, Russian-Iranian trade was up 70 percent; in the [first] eight months of this year, Russia’s trade with Azerbaijan increased by 62 percent; Azerbaijani-Iranian trade is also marked by stable positive trends.

In order to further stimulate trilateral exports and imports, it is necessary to streamline customs procedures and eliminate the existing barriers to the free movement of goods and services.

We could also consider increasing the share of national currencies in mutual financial settlements, fostering closer ties between financial and banking institutions and getting business communities in the three countries more actively involved [in these processes].

Transport infrastructure offers good opportunities for developing cooperation. I am referring primarily to the initiative of building the western section of the North-South international corridor – our colleagues just talked about that – which is indeed one of the shortest and potentially the most commercially competitive transit routes from South Asia to Europe.

We support Iran’s plans to begin the construction of the last section of the western Caspian route – the Rasht-Astara railway line. The implementation of this project will make it possible to organise transit more effective and reduce delivery costs.

We see good prospects for deepening energy cooperation. Russia, Iran and Azerbaijan are firmly entrenched in leading positions in the world in terms of hydrocarbons production. I believe that joint prospecting and development of oil and gas deposits and the launching of joint projects in energy production and transit are in our common interests.

Among other much-needed areas I will single out cooperation in such areas as industry, agriculture, high technology, medicine and drug production. Positive examples of such cooperation have already been mentioned.

Considerable attention should be given to cultural cooperation, the implementation of joint cultural programmes, expanding tourism and youth exchanges and sport contacts and promoting the expansion of direct regional ties between the three countries.

Colleagues, I would like to express my confidence that cooperation between Russia, Azerbaijan and Iran will continue to develop steadily, acquiring a systemic and regular nature.

In closing, I would like to invite you to attend the next trilateral summit in Russia.

[Candobetter.net editor: On 7 November 2017, I located excerpts from President Rouhani's speech at https://syrianfreepress.wordpress.com/2017/11/04/putin-and-rouhani/, where it had republished portions of the article you are reading here. See below:]

President Rouhani said in a press conference after the tripartite summit of the presidents of Iran, Russia and Azerbaijan:

“The three countries aim to build closer ties and take advantage of the capacities of the three countries on the path to economic development and the interests of the nations of Iran, Russia and the Republic of Azerbaijan”.

Thanking the presidents of Russia and Azerbaijan for their presence in Tehran, Dr Hassan Rouhani said:

Referring to the decisions made at the Baku-Tehran summits, including in the area of transit between the three countries and the Eurasian region, Dr Rouhani said:

“Within the framework of this transit route, we will connect north to south, and our decision is to connect Bandar Abbas to Helsinki, connecting Asia to Europe and our route is through Azerbaijan, Russia and Eastern and Northern Europe”.
“We also want to deepen relations in the field of road and maritime connections,”

“Iran, Russia and Azerbaijan, with huge reserves of oil and gas and the good position in the region and the world, should have their own technological cooperation for the production and extraction of oil and gas in this region as well as joint investments in energy and other fields”.

“Our electricity needs to be connected so that we can use electricity of the three countries at different times”.

“Closer relations and the role of the three countries in the stability and security of the region, in particular the fight against terrorism, were discussed at the meeting”.
“It is important for Iran and Russia to cooperate in the establishment of stability and security, and in the fight against terrorism, especially in Syria, and the tripartite cooperation of Iran, Turkey and Russia, which is being pursued in Astana,” he continued.

“At the summit, all three countries emphasised regional cooperation for regional peace and stability and the fight against terrorism, drugs and organized crime”.

“Relations between the three countries are being successfully pursued and we expect a good future for this cooperation”.

“I am confident that these cordial and transparent meetings will bring important results and benefits for our nations”.

Referring to the meeting with Dr Rouhani on regional security, he also said that the two presidents discussed Iran’s nuclear issue and the Syrian issue, saying: