Wildlife rescuer and carer, Rebecca Koller, has observed an unprecedented number of Spectacled flying fox casualties in a traditional breeding site located near a new hotel construction in Cairnes. The spectacled flying fox is a threatened species.[1] Despite many attempts to get the Australian government to investigate and or intervene, the government has failed to get back to her. This is even though the problem has received extensive publicity and the species is about to have its threatened status upgraded from vulnerable to endangered. The source of this article is correspondence between Ms Koller and The Australian Wildlife Protection Council.

On Wed, 3 Jan 2018 at 11:51 AM, Rebecca Koller wrote to Craig Thomson, the president of the Australian Wildlife Protection Council (AWPC), asking for his advice and or assistance based on his knowledge of our government and wildlife protection.

Ms Koller is a flying fox carer from Far North Queensland and the Wildlife advisor of the Cairns Flying Fox advisory board. 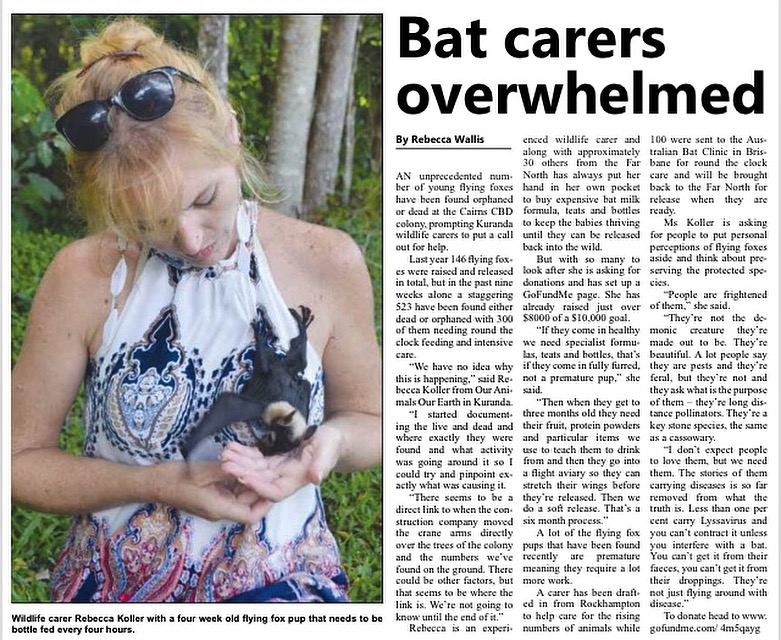 She has been documenting the Spectacled flying fox deaths and orphans at the Cairns Library flying fox colony. Despite numerous attempts, she had received no communication from the Australian federal government regarding her requests for it to intervene or investigate the unprecedented number of pups from this breeding season found dead or orphaned.

The camp referred to carries about 4000 flying foxes. Ms Koller says that this is a huge reduction on previous seasons. Since September 15th 2017, there were 898 flying foxes dead or orphaned from this one camp, compared with 366 last season. In her opinion and that of other wildlife carers, the increased casualties are attributable to the construction work directly across from the roost trees.

Listen to a really informative ABC FM interview with Rebecca Koller on the flying foxes:

Wildlife carer observations deserve respect; they are often all we have

The Cairns Library Colony flying fox camp is considered federally of national significance. Ms Koller has been documenting both orphans and deaths . See the record of deaths and orphans for this season and the previous one. (Females spectacled flying foxes give birth to one young per year, in the October to December period. Juveniles are nursed for over five months and, on weaning, congregate in nursery trees in the colony.)

This record of casualties in the colony has been criticised as only "anecdotal and observatory" by a spokesperson for the company, who says there is no history for comparison. Candobetter.net would say that careful observations from wildlife carers, who know the history of the colony and can point to photographs of corpses and to the animals in their care, cannot and should not be dismissed so easily. If this is the only source of a count on this species, then it is precious and deserves respect. We note that official counts do not monitor the Cairns breeding colonies, which is convenient for the massive development going on there, but needs urgently to be remedied. 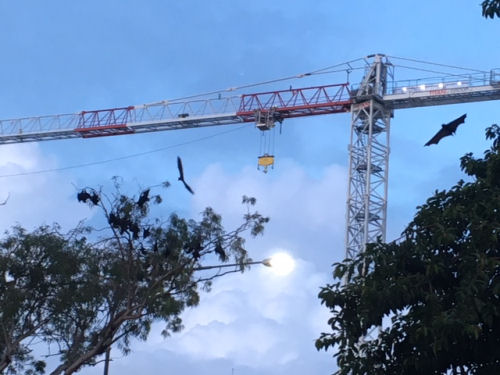 The construction company began building what will be a multimillion dollar hotel development just prior to the birthing season. Ms Koller describes, as the only new factors in this birthing season from the previous one, the clearing of trees once occupied by the flying foxes, the presence of equipment such as pile drivers, and multiple cranes, with arms swinging directly over the roost trees. She says she has written to EHP, the threatened species commissioner, the media, and raised the subject in council meetings on numerous occasions but to no avail.

Greater protection needs to be afforded to the animals due to their decline as a species, their importance as a keystone species and the significance of this particular maternity camp.

Ms Koller has over 50 orphans in her care and had to arrange the transport of 100 orphans to the Australian Bat Clinic in Brisbane, because there were simply not enough carers in her area to cope with the number of flying foxes orphaned this season. Ms Koller crowd funded money to help support carers’ costs to care for these animals. See the wonderful baby bat pictures at https://www.gofundme.com/4m5qayg. Although she raised just over $10,000, all of this has already been used up for necessary supplies. There are still three to four unfunded months remaining before carers can begin to release the flying foxes they have raised. In addition, the birthing season has not yet ended and rescuers are still finding dead and orphaned on a daily basis.

Ms Koller met with the ecologist conducting the monitoring for the construction company and has been keeping him abreast of the bat casualty totals this year compared to the previous year. 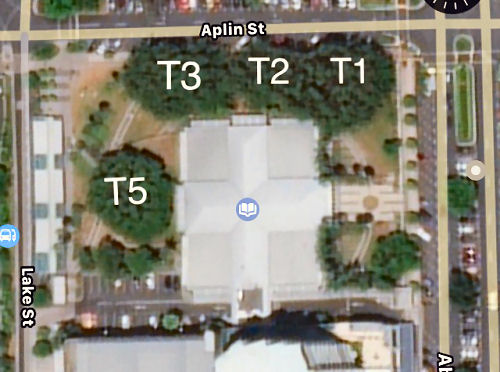 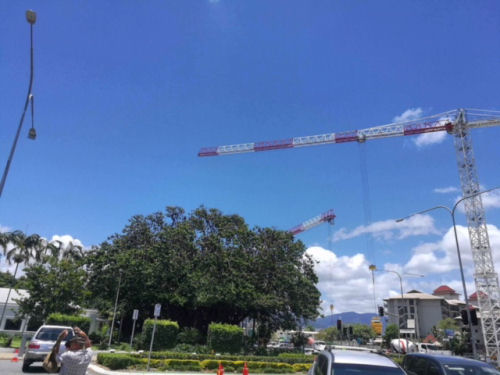 ”The information to be found about this flying fox species, is a perfect example of both federal and state governments appearing to do the right thing by undertaking steps to improve protection. Such protection is, unfortunately, rarely if ever enacted or carried out on the ground, leading to the species’ existence being threatened further.”

“This is highlighted with the Spectacled flying fox species being listed as vulnerable in 2002 and a more recent public consultation seeking recommendations for its conservation status at the end of 2016.

“It would be interesting to know if the Spectacled flying fox conservation status is to be upgraded from this process or whether it was part of the work that the officer Rebecca Koller has had correspondence with, stating that "federal and state governments were working to have the same conservation status for the species".

“It seems disingenuous to me that the federal and state governments and agencies have been making statements such as "This spectacled flying-fox has been subject to appreciable research, monitoring and management over the last 20 years. It is a high priority species under Queensland’s “Back on Track program." See the following link http://www.environment.gov.au/system/files/pages/0e526f41-7db6-4e21-b2a2-8aa9b2b45352/files/consultation-document-pteropus-conspicillatus.pdf. It appears, despite this, that licenses can still be obtained for lethal control. Furthermore, attempts by carers and advocates like Rebecca Koller, to raise welfare concerns about these flying foxes are met with complacency and threats. Yet, they are still being called upon to rescue, rehabilitate and release them back to the wild.”

"Fortunately there is a recovery plan for the species and it is internationally protected and recognised, as such this is where we need to focus for the best outcomes. Below is a list of the 8 recovery objectives, if we are able to find proof that these objectives are not being met. It could be possible to proceed legal action."

SFF have been nominated under the Commonwealth threatened species legislation for up-listing from Vulnerable to Endangered.

Qld government (Labor 2015) promised to match Commonwealth threatened species listing for SFF, so when they move up the EPBC list, they should also move up the Qld thretened species listing from Vulnerable to Endangered. The Minister (Commonwealth) is expected to announce his decision on uplisting on 18 February. nomination has been considered by the TSSC and the Minister is expected to make his decision on 18 February. It has been a long wait.

International obligations for the Spectacled flying fox under CITES

The international obligations are as follows: "The spectacled flying fox is listed under Appendix II of the Convention on International Trade in Endangered Species of Wild Fauna and Flora (CITES). Populations of the spectacled flying fox are recognised as values of the Wet Tropics of Queensland World Heritage Area and therefore under the protection of World Heritage Convention". In this regard we can always contact both CITES and the World Heritage Convention to embarrass the government's into action. The same could be said of the hotel development who is currently claiming that values of Queensland Wet Tropics World heritage area is damaging their business. While making a point of this, it would be a great opportunity to advocate for the Spectacled bats ecological and economical services. The link below is the recovery plan for the species which has both the objectives and international matters. 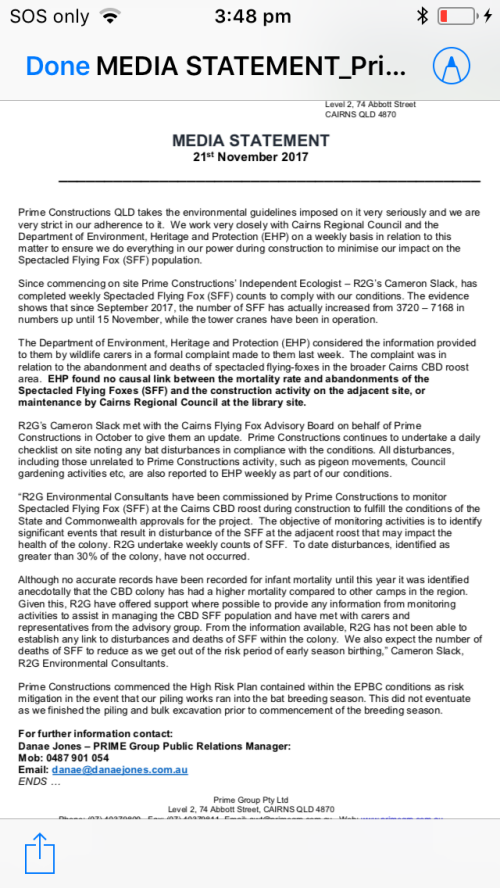 [1] The spectacled flying fox was listed as a threatened species under the Commonwealth Environment Protection and Biodiversity Conservation Act of 1991. They were considered vulnerable due to a significant decline in numbers as a result of loss of their prime feeding habitat and secluded camp sites.